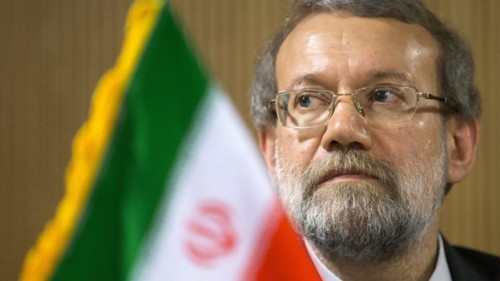 Iran’s Speaker of President Ali Larijani (pictured) has blamed this week’s killing of 12 people at the French magazine Charlie Hebdo on Western intervention in Syria.

Addressing the closing ceremony of the 28th International Islamic Unity Conference in Tehran on Friday, Larijani said Wednesday’s mass killing and subsequent violence and deaths were the outcome of France’s involvement in support for the Syrian “terrorists” — Iran’s label for the opposition to the Assad regime. He said the West was “behaving vindictively instead of trying to correct its mistake, thus wasting the chance to solve problems”.

The Tehran Friday Prayer, delivered by hardline cleric Ahmad Khatami, echoed Larijani: “US dollars, UK pounds and the European Union’s euros are to blame for these killings. These terrorists are your creation and have been nurtured by political support from you and your allies.”

Larijani also blamed countries in the region for not intervening to reverse the sharp fall in oil prices, which is complicating Iran’s economic problems. He asked “whether hostility to Iran should be given top priority” and said the countries were “unable to analyze their own situation and use their own resources in a proper way”.

The Speaker asserted that the fall of more than 50% in the oil price since June would not affect Iran’s negotiations over its nuclear program as the Islamic Republic “has endured conditions much worse than the present one”.

Iranian officials have lashed out at Saudi Arabia, claiming it is involved in a “foreign plot”, since OPEC refused in late November to cut production and thus prop up the oil price.