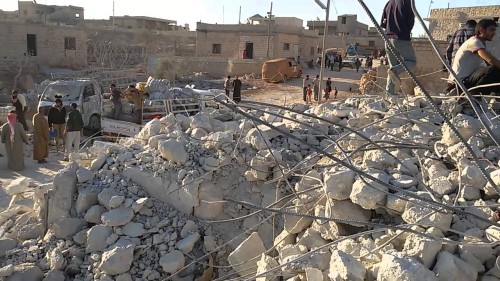 Audio Analysis: The Questions About the US Attacks

UPDATE 1900 GMT: A march in Maarat al-Numan in Idlib Province on Wednesday, expressing solidarity with the Islamist faction Jabhat al-Nusra after it was attacked by US missiles:

And another expression of support:

"Jabhat Alnusra came to support us, when the whole world abandoned us" #Syria pic.twitter.com/r3tYdNxV37

UPDATE 1420 GMT: In his speech to the UN General Assembly, President Obama is framing the campaigns in Syria and Iraq against the Islamic State as part of a War on Terror, linking the jihadists to earlier enemies:

It is time for the world — especially Muslim communities — to explicitly, forcefully, and consistently reject the ideology of Al Qa’eda and the Islamic State.

Obama briefly refers to US airstrikes and then speaks of cutting funding to the jihadists, “contesting the space that terrorists occupy – including the Internet and social media”, and combating radicalization with education and institutions for “new bridges of understanding”.

He also says that “America is training and equipping the Syrian opposition to be a counterweight to the terrorists of the Islamic State and the brutality of the Assad regime”, while calling for “an inclusive political transition that responds to the legitimate aspirations of all Syrian citizens, regardless of ethnicity or creed”.

UPDATE 1320 GMT: The insurgent faction Jaish al-Mujihadeen criticizes US airstrikes as “meant to put down the rebellion”:

“As for the raids in Syria, I say that what has happened so far is proceeding in the right direction in terms of informing the Syrian government and by not targeting Syrian military installations and not targeting civilians,” Haidar said.

He added that Damascus is still watching events with caution.

UPDATE 1305 GMT: Fighters of Jabhat al-Nusra say the group has evacuated its bases in populated parts of Idlib Province in northwest Syria after it was hit by US airstrikes on Tuesday.

American missiles reportedly killed at least 14 civilians and 10 Jabhat al-Nusra fighters in Kafar Daryan in Idlib. Another 50 fighters were reportedly slain near Aleppo.

UPDATE 1255 GMT: US Central Command says it carried out another airstrike on Wednesday against the Islamic State, hitting the jihadists northwest of Al Qa’im along the Iraq border.

The US military also carried out four strikes in Iraq — two west of Baghdad and two southeast of the Iraqi Kurdistan capital Erbil in northern Iraq.

About 20 airstrikes have been carried out across Syria since Tuesday.

UPDATE 1110 GMT: Unnamed “US intelligence officials” have put out further claims to justify Tuesday’s missile attacks on the “Khorasan Group”:

The group has been working with bomb makers from Al Qa’eda’s Yemen affiliate to perfect explosives that can fool Western airport security measures, including, one official said, a bomb in a toothpaste tube.

The officials indicated that “Khorasan” and not the Islamic State had been decisive in the President’s to finally intervene in Syria with aerial attacks after 42 months of conflict:

Obama had resisted taking military action in Syria to avoid inadvertently helping President Bashar Assad, a leader the US would like to see gone. That changed, officials said, because intelligence showed that the Khorasan Group was in the final stages of plotting attacks against the US and Europe.

However, the officials gave differing accounts about the supposed threat. Two said there was no particular location or target, while another insisted that “plotting had reached a more advanced stage”.

The LCC also claims that an airstrike on al-Muhandiseen, near Aleppo, killed 50 Jabhat al-Nusra members.

The opposition group cites an attack in Homs Province — not listed by the US Department of Defense among its operations — which killed six Bedouins.

The LCC said 123 people died across the country on Tuesday. It said it had documented 72 of the American and allied airstrikes, covering northern, eastern, and central Syria.

Even as the US was declaring military success with Day 1 of its attacks in Syria on the Islamic State, the campaign was running into trouble with the Syrian opposition.

Tension rose over an apparent American attack — accompanied by US statements which were vague to the point of deception — on part of the insurgency, the Islamic faction Jabhat al-Nusra.

According to residents and activists as well as Jabhat al-Nusra, US Tomahawk missiles hit the group’s buildings and houses in Idlib Province in northwest Syria, killing civilians as well as fighters.

Local activists in the town of Kafer Daryan (see map) reported that 14 civilians were killed and eight wounded, identifying four of the dead and eight of the injured.

Five women and eight children were among the dead.

The US military said at least 25 missiles fired “west of Aleppo” were targeting the “Khorasan Group”, an organization which suddenly emerged last week in public statements by US intelligence services. The military said on Tuesday that Khorasan, allegedly led by an activist who knew of the 9-11 attacks before they occurred and was Al Qa’eda’s “senior representative” in Iran, was planning a large-scale attack on America.

However, there was no confirmation by the US that “Khorasan” suffered casualties. Instead, activists on social media said that a Jabhat al-Nusra fighter named Abu Yusuf al-Turki.

The destruction in the area:

Jabhat al-Nusra is designated as a terrorist organization by the US because of its leadership’s connections with Al Qa’eda, so the US military may not have shed tears if their attacks on “Khorasan” also damaged the Islamist organization.

However, the group is also a key element in the Syrian insurgency. It fights alongside main blocs such as the Free Syrian Army and the Islamic Front, even if it is not part of those groups.

So the General Staff of the Free Syrian Army put out a coded criticism of the US airstrikes last night, “emphasizing the need to to avoid targeting moderate national and Islamic Forces and unarmed civilians”. The Staff also called for a priority on attacks on “the forces of tyranny and the patrons of extremism” of the Assad regime as well as on the Islamic State.

The Staff’s declaration was reinforced by statements from divisions of the Free Syrian Army.

Harakat Hazm, a brigade supported by the US to the point of receiving anti-tank weapons, warned of a “harbinger of failure” in the “external intervention” — especially if the aerial campaign was not matched by a ground offensive on both the Islamic State and Syrian forces.

Meanwhile, the Local Coordination Committees stressed the “necessity of coordinating with the political and military forces of the Syrian revolution so they can regain control of the positions that the Islamic State has conquered, as well as helping these forces with their continuous battles against Assad’s regime until it is toppled”.

Despite Tuesday’s airstrikes and missiles, the Islamic State has reportedly increased its pressure on the Kurdish center of Kobane in northern Syria, near the Turkish border.

Iso said Islamic State unit are within 8 km (5 miles) of the southern periphery of Kobane.

Iso’s claims were supported by reports on social media of the Islamic State’s capture of grain silos and the village of Robey (see map), 10 km (6 miles) south of Kobane.

The Islamic State’s forces in the area were not targeted by Tuesday’s airstrikes. There are unconfirmed reports that jihadist positions were struck on Wednesday.

State news agency SANA makes no direct reference to the US attacks inside Syria. Instead, it says the two men “tackled counterterrorism efforts…[to] eliminate terrorist organizations in all their forms”.

However, there may be a coded reference to the American intervention in Assad’s statement “that Syria supports any international counterterrorism effort”.

The Syrian military has stepped up bombardment of Adra, taken by insurgents in December 2013. It is also pursuing ground operations to try and enter the “Old Town” section.

US Ambassador to UN Justifies Attacks on Islamic State & “Khorasan”

The US Ambassador to the UN, Samantha Power, has given a justification for the American attacks in a letter to UN Secretary-General Ban Ki-Moon.

Power said the US had begun operations against the Islamic State because it is using Syria as a “safe haven” for its offensive in Iraq, while it “initiated military actions in Syria against al-Qaida elements in Syria known as the Khorosan Group to address terrorist threats that they pose to the United States and our partners and allies”.

Already, there is a striking divergence in media coverage of the airstrikes, with The New York Times putting out the US line on “Khorasan” and the British-based Financial Times questioning that narrative.

In The New York Times, Peter Baker channels the Administration position that the US attacks on the Islamic State tried to “simultaneously wipe out the leadership of an unrelated cell of veterans of Al Qaeda…[which] was plotting an ‘imminent’ attack against the United States or Europe”.

Baker framed the US missile strikes “west of Aleppo” — whose casualties appear to be civilians rather than fighters, let alone “Khorasan”: “Senior Obama administration officials expressed hope that they had killed Muhsin al-Fadhli, the leader of Khorasan and a onetime confidant of Osama bin Laden.”

In the course of Syria’s nearly four-year civil war, Ahmed Hamadi, an anti-regime rebel, often hoped western intervention would help his cause. But when it finally came, it killed his neighbours and their children.

“We asked for western strikes to come and support our fight to free Syria, not to kill us,” sighed the Army of Islam fighter. He described by phone how he pulled out the bodies of women and children from the wreckage of a residential building destroyed in the village of Kafr Daryan, about 50km west of Aleppo.