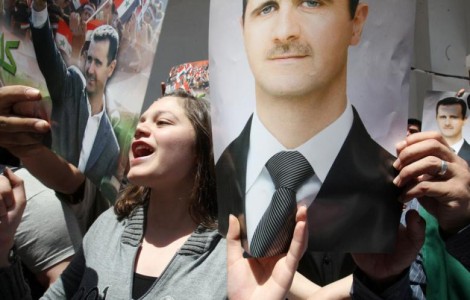 Ban’s spokesman, Stephane Dujarric, said the election would “damage the political process and hamper the prospects for political solution”.

Through its envoy, Lakhdar Brahimi, the UN has been trying to broker a settlement between the regime and the opposition. However, talks in Geneva in January and February — finally held after months of delays — could not even get agreement on an agenda.

Dujarric said the vote is incompatible with the Geneva Communique of June 2012, which calls for a transitional government that then holds free and fair elections.

Brahimi said last month that the elections would mean the end of negotiations to end the war, as the opposition would refuse to renew talks if President Assad was returned to office.

The UN’s words are highly unlikely to make any difference: the Assad regime has already begun campaigning, with posters in the streets and the President’s weekend trip to the “liberated” Christian town of Maaloula.

The Islamic State of Iraq and as-Sham has demanded the withdrawal of a Turkish military convoy which entered Syria on Wednesday.

The Turkish force — said to consist of six tanks, 12 armored vehicles, and 300 troops — moved 25 kilometers (about 16 miles) inside Syria to protect a historic tomb, which is still under Turkish sovereignty, in Aleppo Province.

ISIS said in a video:

Although the Turkish armed forces are expected to withdraw immediately, we have given a three-day period.

We ask them to remove the Turkish flag and withdraw the soldiers. We do not give consent to the armed forces of a secular country within ISIS’s sacred land. Otherwise, we will demolish the tomb.

Head of Opposition Asks for More Saudi Help for Insurgents

Ahmad Jarba, the head of the opposition Syrian National Coalition, has asked Saudi Arabia to increase its support for insurgents.

“The talks focused on continuing the Saudi aid and on the need to strengthen the capacities of the Free Syrian Army,” Jarba’s adviser Monser Akbik said.

Akbik said the assistance was needed “to face the increasing number of mercenaries and militias belonging to Hezbollah and Iraqis” fighting alongside the Assad regime and to confront “intensifying military and economic aid (from) Russia and Iran” to Damascus.

Jarba also told Prince Salman that the regime’s announcement of a June 3 Presidential election “closed the door to any political solution”.

Video: Aftermath of Bombing in Mleha Near Damascus

Scenes from a bombing of Mleha, east of Damascus:

The Syrian military has been bombarding the area amid a weeks-long attempt to push out insurgents.

Footage celebrating the National Defense Forces as they face the insurgent offensive in coastal Latakia Province in western Syria:

After initial gains by the insurgents, including the border village of Kassab and the last regime crossing with Turkey, the lines of the offensive have settled. Syrian forces still control the key position of Tower 45 overlooking villages in the north of the province.

The Organization for the Prohibition of Chemical Weapons said Tuesday that almost 90% of the Assad regime’s chemical toxins have been shipped out of the country.

The announcement comes amid claims of a series of regime attacks on civilian areas using chlorine, which is not classified as a prohibited toxin because of its common industrial uses.

The OPCW said the 17th consignment of chemical stocks had been transported to the Mediterranean port of Latakia and loaded on cargo ships.

“This latest consignment is encouraging,” OPCW director Ahmet Uzumcu. “We hope that the remaining two or three consignments are delivered quickly to permit destruction operations to get under way in time to meet the midyear deadline for destroying Syria’s chemical weapons.”

Uzumcu said 86.5% of the total stocks have been removed, including 88.7% of the most dangerous compounds, known as Priority 1 chemicals.

The Assad regime committed itself to meet a June 30 deadline, set by the United Nations Security Council after last August’s chemical weapons attacks near Damascus, to hand over all chemical weapons. It missed two deadlines earlier this year for transfers, blaming security issues.