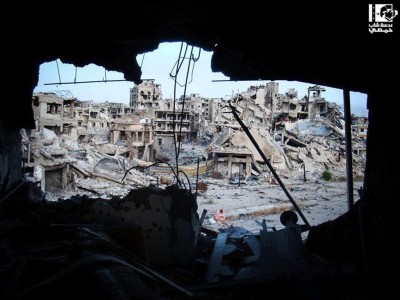 As the Assad regime tries to quell insurgent-held areas of Homs, it takes Anne Barnard of The New York Times on a tour of the regime-controlled parts of the city.

Barnard goes beyond the presentation by the authorities to ask if “victory” in Syria’s third-largest city will be superficial:

On the edge of the Old City here, children play beside a house blown open by shelling. An antique wood-framed mirror leans against the wall, so that soldiers can watch for threats from around the corner. A block closer to one of the city’s last front lines, trash, rubble and rusted cars litter streets of charred and sagging buildings.

The government retook this neighborhood, Bab Sbaa, from insurgents more than a year ago. But few of its residents, once a mix of Christians and Sunnis, have ventured back. Government supporters whisper that insurgents could attack again. And some opponents say they prefer to remain in still-restive areas despite the shelling, rather than live among the military checkpoints here, where soldiers peer from storefronts converted to miniature army posts.

Now, as insurgents who long held much of the Old City make what could be their last stand against withering bombardment, and the government declares it is on the verge of fully controlling the city, Homs — not for the first time — represents an important turning point for Syria. If the government is victorious here, it will control a devastated landscape, a physically fragmented and socially divided city where many community bonds, not just houses, have been destroyed.

A government victory in this battle would serve to lay bare the more vexing challenge confronting all Syrians after more than three years of civil war: how to stitch the country back together.

For both sides, Homs, a central Syrian crossroads city with a diverse prewar population of one million, is crucial to the future. The government hopes it will be a showcase of rebuilding and reconciliation. The exile opposition coalition, condemning the continuing blockade of the Old City, last week called Homs “key to a democratic solution for a united Syria”.

But achieving either side’s vision will be a challenge. At least several hundred thousand residents remain displaced, inside or outside Syria, where the few lucky ones with Internet access broadcast nostalgia for their city and its reputation for stubbornness and humor. Those who remain inhabit neighborhoods that feel like islands — some intact but fearful, others in ruins, linked by avenues that few travel at night — and are increasingly sorting themselves by sect and political affiliation.

Homs has long been regarded by government opponents as the capital of the revolution. It held some of the earliest and largest protests in 2011, drawing violent crackdowns. Government opponents here were among the first to bear arms, and the Syrian Army first unleashed heavy artillery here, in the Baba Amr district. In this way, Homs offered a foreshadowing of what awaited the rest of the country.

Lately, Homs has become a center of the government’s strategy of blockading and starving insurgent-held areas. A February cease-fire, which included an amnesty, allowed 1,500 civilians, subsisting on grass and leaves, to depart the Old City, and brought brief hope that Homs might find a path to common ground.

But the challenge is to overcome not just the shattered infrastructure, but also the deep resentments that come from being bombed, starved and run out of the city. The amnesty alone left hard feelings on all sides. Some government supporters are enraged that hundreds of fighters, some of whom had killed their relatives, have been allowed to go free since February.

“This is natural,” the Homs governor, Talal Barazi, who has lost a cousin in the fighting, said in a recent interview. “Initially, we said we had to take revenge on these armed groups. But if you have a bird’s-eye view of the benefit of the country, reconciliation is more important than individual emotions and interests.”

But with some civilians and former fighters who accepted the evacuation still detained by the government for background checks that were part of the deal, fears of reprisal remain. The Homs prison is full of young Syrians arrested as long as two years ago for acts such as delivering medicine and food to demonstrators.

The amnesties also sowed division within the opposition. As bombs fell on the Old City last week, a woman there accused those who left of betraying others for “a shwarma sandwich and a bottle of yogurt.”