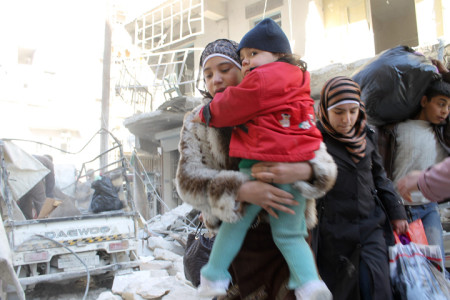 The heads of five United Nations agencies issued a statement on Wednesday lamenting the failure of efforts to help Syria’s people and appealing once more for assistance:

One year ago, as leaders of UN agencies struggling to deal with the growing human impact of the Syrian crisis, we issued an urgent appeal on behalf of millions of people whose lives and futures hang in the balance: Enough, we said, enough!

That appeal has gone largely unanswered. The war escalates in many areas. The humanitarian situation deteriorates day after day. And for the civilians remaining in the cities of Aleppo and the Old City of Homs, as well as other parts of the country experiencing heavy fighting, the worst days seem yet to come.

As the fighting has intensified in recent weeks, at least one million people are now in need of urgent humanitarian assistance in Aleppo alone. The road from Damascus to Aleppo — a vital lifeline — has often been cut. 1.25 million people are in need of food in Aleppo city and rural parts of the governorate. Other key roads are blocked by different armed forces and groups.

All too often, humanitarian access to those in need is being denied by all sides. Aerial bom-bardment, rockets, mortars and other indiscriminate attacks slaughter innocent men, women, and children. In Aleppo it is reported that there are now only 40 doctors for a population of 2.5 mil-lion people – once there were more than 2,000 – and medical supplies are scarce. The city is sur-rounded on all sides.

Across Syria, the lives of more than 9.3 million people are now affected in this, the fourth year of conflict. With a third of the nation’s water treatment plants no longer functioning, with 60 per cent of health centres destroyed, and with some 3.5 million people living in areas under siege or unable to be reached with humanitarian assistance, the innocent civilians of Syria seem to be surviving on sheer courage.

As humanitarian agencies, working closely with international and national non-governmental organizations, we are doing all we can to save lives and alleviate suffering — even in the face of great danger to, and sacrifice by, our colleagues on the ground. But we know that what we can do is not sufficient. Not nearly so.

If we are to do more, to reach and help more people, those engaged in this horrific conflict, and those with influence over them, must do more.

Today, we call upon all parties to this brutal conflict to take urgent action to:

*Enable unconditional humanitarian access to all people in need, using all available routes either across lines inside Syria or across its borders.

*Lift the sieges on civilians currently being imposed by all sides, such as those now sealing off parts of Aleppo, the Old City of Homs, Yarmouk, East Ghouta, Moadhamieh, Nubl and Zahra.

*End the indiscriminate bombing and shelling of civilians by the Government and opposi-tion groups and stop all other violations of international humanitarian law.

Thus far, diplomatic efforts designed to end years of suffering have failed. What have not failed are the courage and determination of extraordinary Syrian civilians to survive. Can those with the responsibility and the power and the influence to stop this terrible, tragic war find the same courage? The same will?

For if the civilians of Syria have not given up, how can the world give up on its efforts to save them — and save Syria?