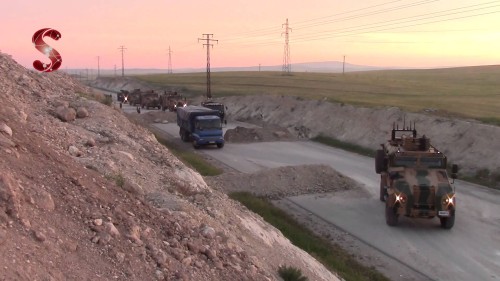 Erdoğan said the convoy took “aid” to the tomb of Süleyman Shah, the grandfather of the founder of the Ottoman Empire, 25 kilometers (about 16 miles) inside Syria in Aleppo Province.

The tomb is under Turkish sovereignty under a 1921 treaty.

Claims circulating on social media on Wednesday said six Turkish tanks, 12 armored vehicles, and 300 Turkish soldiers had been deployed 200 meters from the positions of the Islamic State of Iraq and as-Sham. Video showed part of the convoy moving through a Kurdish checkpoint in northern Syria:

Erdoğan said, “Right now, the issue is not about ISIL. The job of our convoy there is to transfer aid to the Süleyman Shah tomb. Our friends in charge are continuing the effort.”

The Prime Minister said last month that Turkey would take action amid fighting between ISIS and Syrian insurgent,as Foreign Minister Ahmet Davutoğlu declared that Ankara had the right to “take all precautions to protect the tomb”.

In late March, a leaked audio tape revealed a discussion between Davutoğlu; the head of Turkish intelligence, Hakan Fidan; and the deputy head of the military, Yaşar Gürel, on how to use protection of the tomb as a pretext for military intervention:

Davutoğlu: Prime Minister said that in current conjuncture, this attack (on Suleiman Shah Tomb) must be seen as an opportunity for us.

Fidan: I’ll send 4 men from Syria, if that’s what it takes. I’ll make up a cause of war by ordering a missile attack on Turkey; we can also prepare an attack on Suleiman Shah Tomb if necessary….

Güler: Mr. Fidan should urgently receive back-up and we need to help him supply guns and ammo to rebels. We need to speak with the minister. Our Interior Minister, our Defense Minister.

We need to talk about this and reach a resolution, sir.