Iran Analysis: An Ahmadinejad Comeback? Not Quite 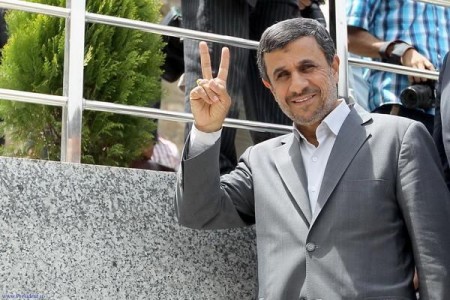 The reformist Iranian newspaper Shargh caused a flutter last week when it reported that supporters of former President Mahmoud Ahmadinejad are planning his return to front-line politics.

Shargh said the Ahmadinejad camp had set up a media group Havadarn-e Mahmoud Ahmadinejad (Supporters of Mahmoud Ahmadinejad), including prominent websites such as Dowlat-e Bahar, Ayin News and Rais Jomhur-e ma (Our President). These outlets and another site, 72 Square — named after the roundabout in Tehran’s Narmak neighborhood where Ahmadinejad lives — have been attacking the Rouhani Government and former President Hashemi Rafsanjani as well as boosting Ahmadinejad.

Then there is the sudden appearance of “DrAhmadinejad” on Twitter:

So is this the political resurrection of Ahmadinejad, eight months after he stepped down from office amid criticism of his devastation of the Iranian economy and his aggression promotion of in-fighting within the Iranian system?

Despite the flutter about the pro-Ahmadinejad websites, this is not exactly a polished operation. For example, if you are promoting Ahmadinejad’s right-hand man Esfandiar Rahim-Mashai — blocked from standing as a candidate in the 2013 Presidential election — this photo is not the best way forward:

The former President is a member of the Expediency Council but, apart from one photo opportunity earlier this year, has not been noticeable there. He sent a letter demanding a debate after President Rouhani told State TV of Ahmadinejad’s errors on the economic front — Rouhani’s office ignored the challenge and continued to pile blame on his predecessor.

Ahmadinejad supporters tried to hit back last December, threatening to expose “corruption” among Iran’s elite over more than a decade. Nothing emerged. Instead, more revelations have linked Ahmadinejad to a disastrous housing policy, the large budget deficit, and the “disappearance” of billions in oil revenue. His ally, billionaire tycoon Babak Zanjani, is still behind bars and facing a lengthy prison sentence.

There is a significance to the pro-Ahmadinejad campaign. Many of his supporters are also backers of the hardline Endurance Front, which is the most vocal political opposition at the moment in Iran. The outlets are likely to echo sustained criticism of the Rouhani Government by clerics like Ayatollah Mesbah Yazdi and MPs like Ruhollah Hosseinian and Mehdi Koochakzadeh — all of this building towards the next Parliamentary elections.

But this is a far cry from trumpets for Ahmadinejad’s return. The cold political reality remains that the former President is draped with the albatross of economic failure. Even if his supporters tarnish Rouhani, Mahmoud will be the man who wasted the Islamic Republic’s future, even as he aggressively took on the “West” and those who were supposedly corrupting the system.

Ahmadinejad’s allies, like Rahim-Mashai, have been shunted out of the spotlight. His vaunted “populist” base is not calling for him to rescue Iran. The Supreme Leader does not mention his name.

Days after his departure last August, Hanif Zarrabi-Kashani wrote for EA, “Ahmadinejad Leaves with a Whimper, Not a Bang“.

The “comeback”, for now and for the foreseeable future, is still little more than that whimper.