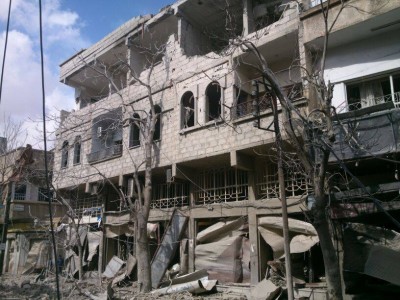 LATEST: Syrian Groups in Britain Ask Volunteers Not to Fight in Syria

Sources report that insurgents have repelled the latest attack by Syrian forces and Hezbollah near Yabroud, the target of a month-long regime offensive.

The sources said at least 36 pro-Assad fighters were killed, despite air support which carried out at least two dozen attacks on the front near Rima Farms.

The Syrian military insisted that it was advancing, re-claiming the Rima Farms area.

Yabroud is the largest city in the Qalamoun region between Damascus and the Lebanese border.

Syrian Groups in Britain Ask Volunteers Not to Fight in Syria

Several leading Syrian groups in Britain have issued a statement asking young men not to travel to Syria to fight.

The groups cite tensions between foreign fighters and local people, the perception that some foreign fighters — a reference to the Islamic Front of Iraq and as-Sham are actually allied with the Assad regime, and adverse media coverage affecting aid to the opposition and Syrians.

The groups said would-be volunteers should instead raise awareness among the British public, donate money, and pray for Syrians.

Head of Military Operations of Islamic Front: We Get No International Support<; Offensive Limited by Lack of Funds

Zahran Alloush, the head of military operations for the insurgent bloc Islamic Front, has said that the East Ghouta offensive near Damascus has been limited by lack of funds.

Alloush, who also heads the faction Jaish al-Islam, said Phase I had cost about $2 million, and he is seeking to raise $10 million for a second phase.

The commander claimed that Jaish al_Islam gets no international support, and — unlike groups like the Islamist faction Jabhat al-Nusra — cannot draw revenues from oilfields captured in eastern Syria.

Alloush specifically denied that Saudi Arabian sources are providing funds for his faction.

The attackers detonated their explosive belts in a hotel which functioned as the municipality building.

State media said three people were killed; a Kurdish official in Qamishli, Juan Mohammed, confirmed the assault but did not have figurees on the dead and wounded.