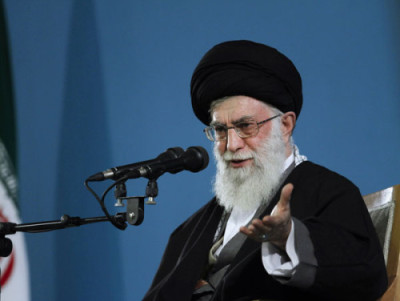 LATEST: US Forces India to Cut Oil Imports from Iran by 2/3rds

The Supreme Leader delivered another proclamation of the policies of the “resistance economy”, in an address to senior officials on Tuesday.

Amid nuclear negotiations, Ayatollah Khamenei repeated the political line that “the fundamental goal of these policies is making Iran less vulnerable to international economic developments, including sanctions”, and reducing Iran’s reliance on oil revenues.

However, the Supreme Leader also had a significant economic message in his promotion of the 24 objectives, developed by the Expediency Council and issued by Khamenei in a speech last week.

He effectively admitted the failure of past efforts at privatization while promoting the increase in indigenous production and exports; reduction of inflation, taxes, and unemployment; reform of the financial system; security of food and other basic goods; and curbing of corruption.

Khamenei declared, “Social justice is the most important among these criteria. The Islamic system does not accept economic growth without social justice. Any progress in the country’s economy must improve the situation of the…deprived sectors of the population.”

The Rouhani Government, inheriting an economy badly damaged under the eight years of the Administration administration, has said that inflation — more than 40% when it took office last office — is now down to 25%. It claims the Iranian currency has been stabilized and that the decline in production has been checked.

However, senior officials have set a modest goal of growth near zero in 2014/2015, following last year’s contraction of 5.8% in the economy.

India has been forced by American pressure to cut its Iranian oil imports by nearly 2/3rds.

Indian government sources said Washington asked the US to hold its shipments at the levels of December 2013.

Having increased its loading plans for January to March, India must cut its purchases to about 110,000 barrels per day (bpd) to drop its average to 195,000 bpd for the six months to July 20.

A “top US energy policy official” sent a message to Indian ministries in February that, under November’s interim nuclear deal, Iran should hold oil exports at “current volumes” of about 1 million bpd.

Purchases of Iranian oil by its top four buyers — China, India, Japan and South Korea — rose to about 1.25 million bpd in January, compared to a daily average of about 935,900 bpd for 2013.

India was on track to average loadings of 322,200 bpd from Iran in the first quarter. Tanker arrival data indicated Delhi took 412,000 bpd in January, double the daily arrival average for December.

Speaker of the Parliament Ali Larijani has criticised EU Foreign Policy chief Catherine Ashton’s meeting with Iranian women’s rights activists, calling it a “source of embarrassment” for the EU.

Meanwhile, Tehran MP Mahdi Kouchakzadeh compared Ashton’s meeting with a 1964 agreement between the US and the Pahlavi regime that effectively granted diplomatic status to all American personnel in Iran. The agreement was a source of great resentment for ordinary Iranians and led to Ayatollah Khomeini’s exile following his strident opposition to the deal.

Kouchakzadeh declared that “we all swear to protect the country’s independence. By Capitulation treaty, the US tried to buy impunity for its citizens from being tried and convicted inside Iran; but EU’s representative’s behavior is worse than that because she met with the people convicted of the 2009 sedition to show sympathy to them for not being treated just.”

Velayati said “Such issues are not related to Mr. Ban Ki-moon and if he is worried about human rights, he should do something about the situation of the Muslims,” referring to the persecution of many Muslims in the Central African Republic.

Velayati’s comments are a response to the Secretary General’s report to the UN Human Rights Council in which he urged President Rouhani “to consider the immediate release of the two opposition leaders (Mehdi Karoubi and Mirhossein Mousavi, presidential candidates in 2009, who have been under house arrest since 2011) and to facilitate their urgent and adequate access to medical care.”

Speaking at an “international parliamentary conference” on Syria, Speaker of Parliament Ali Larijani accused the United States of propping up dictators in the region.

“The concern of dictators in the region about Syria is a kind of deceit and is unbelievable. Without reliance on the US and the West, dictators have no chance of any presence in the Middle East and North Africa,” he said.

He added, “International circles are watching the events [in Syria] and make no move. They only make political gestures and speak but tragedies continue to take place in Syria.”

The one-day meeting is being attended by representatives from Russia, Algeria, Syria, Iraq, Lebanon, Cuba and Venezuela.

Speaker of Parliament Ali Larijani announced that “The nuclear file is still at the hands of the Supreme National Security Council and the Foreign Minister is only the negotiator, but this file itself has not been transferred to the Foreign Ministry.”

Larijani then added that the “more concentrated monetary power” of the IRGC Khatam ol-Anbia Construction Base compelled the government to increasingly involve the IRGC in civil projects.

The IRGC’s deputy for culture and propaganda, Mohammad Ali Assoudi has reinforced pressure on President Rouhani regarding the administration’s attempt to open up cultural space in the country.

Salami commented “America no longer creates events in the region, rather it is the Muslims who create events and the Americans are forced to be another actor in decline, although not a dominant player. Meanwhile, the Americans have lost operational power against Syria today and this is a great proof for Muslims.”

He also set his sights on Israel, declaring “Islam has given us the desire, capacity and force to annihilate the Zionist regime so that our hands are the trigger 1,400 kilometers away for the event day.”

Special Assistant to the President in Religious Minority Affairs and former Intelligence Minister Hojjat al-Eslam Ali Yunesi declared his support for Rouhani’s citizen rights charter but noted that it may face difficulty in being implemented.

Yunesi stated, “If the administration can act upon its promises regarding citizen rights charter, the rights of minorities will be secured by themselves.”

MPs to Intelligence Minister: Why Did You Not Prevent Ashton Meeting Leaders of Sedition?

The antagonistic sequel to last weekend’s visit by the European Union’s Catherine Ashton, the lead nuclear negotiator for the 5+1 Powers, continues….

Several MPs have written Intelligence Minister Mahmoud Alavi about Ashton’s discussion, hosted by the Austrian Embassy, with women’s rights activists: “Why did you not prevent the meeting of EU Foreign Policy Chief with the convicts of the American sedition (the protests after the disputed 2009 Presidential election)?”

The Iranian Foreign Ministry has complained to the Austrian Embassy about the event, warning it could affect Iran-EU relations.

In the latest of the mounting hardline attacks on President Rouhani over efforts to open up Iran’s cultural sphere, the spokesman of Parliament’s National Security Commission, MP Hossein Naghavi Hosseini, has said “a cultural coup d’état” is taking shape.

Naghavi Hosseini declared, “We are in a war that is multiple times the difficulty of the Sacred Defense era. (the 1980s war with Iraq). This war is silent and one does not know where he is being hit.”

The MP continued, “It is strange for a President who gives slogans of freedom but has not accepted criticism and considers critiques to be illiterates.”