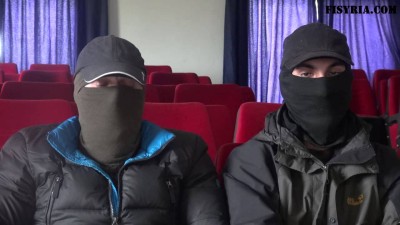 FiSyria, the website close to the jamaat of ethnic Chechen Umar Shishani, ISIS’s military Amir, has published a video message from two fighters who claim that they left the Chechen-led Jaish al-Muhajireen wal-Ansar (JMA) for ISIS for ideological reasons.

JMA was previously led by Umar Shishani, who left the group when he formally swore allegiance to ISIS in December.

There are growing splits among the Chechen fighters in Syria, exacerbated by the ongoing fighting with ISIS. JMA has stayed out of the fighting, with Salahuddin vowing that he would not take part in it, but preferred to concentrate on fighting Assad’s forces. However, his second-in-command Abdul Karim Krymsky, a Crimean Tatar, has spoken out against ISIS and accused them of massacring civilians.

Meanwhile, Chechens in ISIS have slammed JMA for fighting with non-Islamist groups particularly the independent Syrian faction Nuraddin az-Zinki, but also the Islamic Front, which ISIS considers to be a “pro-democracy” group.

The claim in the video is that a group of 15 fighters left JMA for ISIS.

With the permission of Allah, we have begun a video message addressed to all those who are still in doubt after some videos posted on the Internet with respect to the so-called “Fitna” in Sham. We want to stress that this appeal was made immediately after a group of 15 people left Salahuddin Shishani, who was previously the Emir of the Caucasus Emirate (in Sham).

Also recall that the group JMA is today in a friendly alliance with Free Syrian Army groups and the so-called “Islamic Front”. On territory where the laws of Allah are not upheld.

The man on the left explains in accented Russian that when he first decided to join ISIS, people warned him that the ISIS fighters wanted to kill their Amir and that ISIS were creating fitna. But later, he saw that people around Raqqa really loved ISIS, and that ISIS had established Sharia Law in the areas where it was in control.

After that, the man says, he realized that he made a mistake and he changed his mind about ISIS. Then he went to ISIS and joined them as ISIS had requested. ISIS only wanted the truth and everything he had heard about them was a lie.

He notes that the Quran says Muslims should unite and not divide themselves.

The man says that he went to talk to the Caucasus Emirate but they said they should get the opinion of scholars.

The man dismisses the “scholars” as wrong because in his view they do not agree with the Quran.

“Many people today want to destroy ISIS. They want ISIS not to exist,” he later says.

He later criticizes the Free Syrian Army, the “Jaish Hur” as he calls them:

“What about the so-called Jaish Hur, that say they are Muslims but make friends with the infidels? We don’t make any difference between Saudi Arabia [?] and Russia and any other capitalist country…”

He says that those who make friends with Jews and Christians are infidels.

Later in the video, there is a voice-over with no footage. The speaker says that he was fighting with JMA in Kafr Hama near Hraytan and that is where he met ISIS who were happy to meet them.

When JMA told ISIS they were neutral, the ISIS fighter said how could that be, when they were fighting with the FSA and with other groups, what kind of neutrality could that be?

“We don’t say that all of Jaish Hur are infidels,” he admits. “But Allah says that Sharia is best for us and they say that Sharia doesn’t suit us today and democracy is better for us…. They contradict the Quran and Allah.”