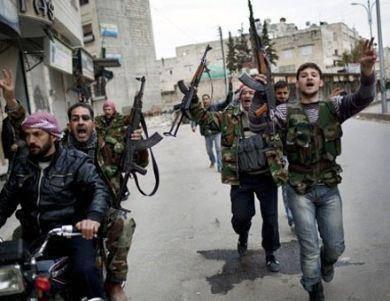 The Syrian military had said that it occupied Sheikh Najjar over the weekend, but opposition statements and pictures claimed fighters from the Islamic Front and Jabhat al-Nusra had pushed out regime forces after heavy clashes.

Weeks ago, Syrian troops tried to enter the industrial area but were repelled.

Both sides are trying to open up areas to their forces while cutting off the other inside Aleppo, which has been in military stalemate since insurgents entered Syria’s largest city in July 2012.

Senior officers of the Joint Military Command have challenged the opposition politicians of the Syrian National Coalition and the Supreme Military Council, rejecting its dismissal of General Salim Idriss as military commander:

The SMC supports what the #FSA inside #Syria supports, and they're pledging their support to General Salim Idriss. (1/2)

The SMC does not support one person, but the Syrian revolution and the #FSA.

Flanked by commanders, General Salim Idriss said in a video statement, “We…have been asked to start working on a total restructuring of the SMC.”

Idriss blamed the Syrian National Coalition’s Defence Minister Asaad Mustafa for the decision to replace him with Abdel Ilah al-Bashir, the commander of the Quneitra Front in southern Syria.

A declaration signed by 16 commanders backed the General:

(The) decrees were improvised and taken without consultation: they are therefore unlawful and illegitimate. Therefore, we wish to reaffirm that we do not in anyway recognise any statements issued by them.

Secondly, General Salim Idris has been tasked to carry out a comprehensive restructuring initiative of the Supreme Military Council, including the moderate military and revolutionary forces on the ground in order to invest in all available human resources accordingly.

Thirdly, we call upon all military and revolutionary forces on the ground to join the Supreme Military Council to unite and fight together to oust the criminal regime. God is our witness.

Insurgents have posted footage of two explosions — the second within a week — killing dozens of Syrian troops and pro-Assad militia.

The blasts are part of “Operation Aleppo Earthquake”, in which insurgents tunnel under their targets and plant explosives.

The Al-Alam Building, near the Aleppo Citadel and the Carlton Hotel, a command center struck by an underground bomb last week:

Footage of an attack on the Aleppo Citadel:

Insurgents preparing tunnel for a blast:

Insurgents have posted a video account of the bombing of the Carlton Hotel in Aleppo (see map) last week:

State media claimed that a “terrorist” attack had been foiled, but well-placed sources in Syria say “scores of Assadis were killed”:

The hotel was full of SAA (Syrian Arab Army) and shabiha. It was a major CCC (command, control, and communications) base, the main link to and securing the supply line to the Citadel, which is peppered with regime sniper posts.

Russian Foreign Minister Sergei Lavrov said on Wednesday that a United Nations resolution on humanitarian aid could be agreed in days if Security Council members do not “politicize” the issue.

Moscow has criticized a Western-Arab draft resolution demanding the Assad regime allow access to besieged areas throughout the country. Russia proposed its own text and a parallel resolution that condeming acts of “terrorism”.

“If nobody in the Security Council seeks to politicise this issue, to promote one-sided approaches, I am convinced we will be able to reach an agreement in the coming days,” Lavrov told a meeting of Gulf States in Kuwait.

The Western-Arab draft has been merged with the Russian text, but the Council is still trying to find common ground on points such as a threat of targeted sanctions against Damascus and cross-border access for aid.

Lavrov said on Monday that Russia would veto any resolution endorsing the entry of aid convoys into Syria without the consent of the Assad regime.

State TV’s coverage of the ceasefire between the Syrian military and the Free Syrian Army in Babbila, southeast of Damascus:

The video shows groups of men celebrating and an official proclaiming, “The reconciliation is because there are young men who care about their country and homeland, so they pulled together and started knocking on doors. Thank God, the doors were opened by the concerned parties.”

Reports claim Qusai Zakarya, a prominent activist from Moadamiya southwest of Damascus, has left Syria after weeks in detention.

Zakarya highlighted the effect on civilians of a month-long siege by the Syrian military, going on hunger strike for 33 days at the end of 2013. He ended the strike as Syrian forces and a local council announced a ceasefire, which provided some aid to the town.

The activist was taken to Damascus last month by security forces, raising fears about his safety.

See Qusai Zakarya: “If Assad Had Smallest Shred of Dignity, We Would Not Have Started Revolution”
Activist Zakarya Ends Hunger Strike in Besieged Moadamiya