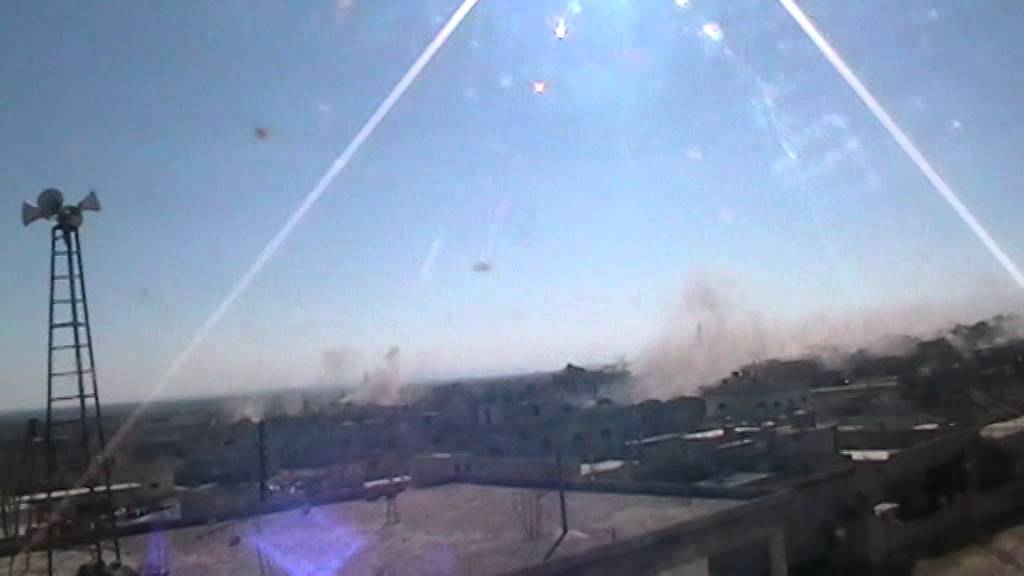 A local activist from Hama, who was present when four 9M55K 300mm rockets hit Kafr Zita on February 12, said he believed the attack was launched from the regime-controlled Hama airport, 30 kilometers (19 miles) to the south:

A rocket fell on the eastern part of Keferzita on a neighborhood called al-Makassem al-Hatef. There is a small square and the rocket fell there. The rocket released small bomblets when it exploded in the air. I did not see any helicopter or warplane at the time of the attack or before. One of the rockets did not explode, and military specialists dismantled the rockets and they found dozens of bomblets. They removed the fuze from every bomblet.

The second rocket exploded halfway through in the air and released bomblets that injured people including women and children and killed one internally displaced person from nearby Mourik village. The only infrastructure damage caused was from the shrapnel. I remember seeing at least 10 injured but I was told that it was much more. I only saw injuries from shrapnel but I didn’t see any amputations….

On February 12, in the afternoon around 4 maybe, I received a phone call from a [opposition] military source that two rockets were launched from Hama military airport. We all tried to alert the residents but not everyone was able to hide in time.

[The next day] two rockets fell on the northern area [of the village] next to al-Ma`sara road, injuring several people. There were no deaths. I saw a 65-year-old man injured by fragments in his shoulder and his son’s wife injured in the leg. Both rockets exploded but also caused limited damage to infrastructure. The rockets were also launched from Hama airport. There were no airplanes flying before or after the attack. The injured were taken to the field hospital.

Videos of the attacks and their aftermath, with images of the rockets that were fired:

HRW provides this information about the rocket launching system:

The 9M55K rocket is launched from the BM-30 Smerch (tornado in Russian), a multiple launch rocket system designed and initially manufactured by the Soviet Union in the late 1980s and then manufactured and exported by the Russian Federal State Unitary Enterprise “SPLAV State Research And Production Association” from 1991 onward.

According to its manufacturer, the BM-30 Smerch has 12 launch tubes and can deliver up to 12 9M55K rockets per volley, each containing a total of 72 individual 9N235 submunitions. The BM-30 Smerch weapon system was not previously known to be in the possession of the Syrian government, and Human Rights Watch had not previously documented the use of the 9M55K rocket and 9N235 submunition in the conflict. Authoritative open-source databases on military equipment holdings and transfers by the International Institute for Strategic Studies and the Stockholm International Peace Research Institute do not list Syria as possessing the BM-30 Smerch.

HRW concludes that the regime are the most likely culprits of the attacks, saying it was “highly unlikely” that insurgents could have acquired the eight-wheeled, 43,700 kilogram launch vehicle or that they would have been able to “operate its sophisticated fire control system without significant training or time to conduct practice drills”.

The report adds, “There is no video evidence or written claims that any rebel group controls any BM-30 launchers, its similarly sized re-supply vehicle, or any 300mm surface-to-surface rockets like the 9M55K rocket.”

According to HRW, “the 9M55K rocket is three times as large as the other type of cluster munition rocket used in Syria (122mm SAKR rocket), while the mass (weight) of the fragments contained in the 9N235 submunitions make them more powerful and deadly than other types of submunitions. While designed to detonate on impact, each submunition has a back-up pyrotechnic self-destruct feature designed to destroy it two minutes after being ejected from the rocket, but in this attack the self-destruct feature appears to have failed to function in some cases. The body of the submunition, weighing 1.8 kilograms, is lined with two sizes of pre-formed fragments, 300 fragments weighing 0.5 grams and 95 weighing 4.5 grams. These latter fragments are about the same mass as a 9mm pistol bullet.”