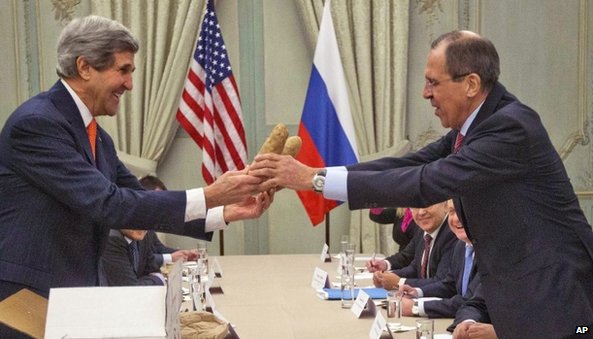 Russian Foreign Minister Sergei Lavrov and US Secretary of State John Kerry tried to take headlines away from Syria’s military conflict on Monday, meeting in Paris to discuss the proposed “Geneva II” conference for a political resolution.

They seized some headlines. Whether they seized any momentum is a far different matter.

After a bizarre photo opportunity in which Kerry presented Lavrov with potatoes, the two men spoke of their determination to hold the conference on January 22, despite doubts about any significant participation by the Syrian opposition and insurgency.

The two men were vague about any measures to encourage both the regime and the opposition ahead of the meeting.

Kerry said, “We talked today about the possibility of trying to encourage a ceasefire. Maybe a localised ceasefire in Aleppo,” without any indication of how that ceasefire could be encouraged.

Lavrov said the Assad might lift its siege on certain insurgent-held areas, including East Ghouta near Damascus, inadvertently raising the question of why the humanitarian steps had not already been taken to ease months-long cut-off of food and supplies.

Instead of answering, the Russian Foreign Minister shifted the blame, “We expect similar steps from the opposition.”

None of this appeared to offer any incentive to the opposition and insurgency to participate in the conference.

Earlier in the day, a spokesman for the Syrian National Coalition said they would come to Switzerland if the “international community agreed to basic demands”.

These included a transitional governing body, “opening humanitarian corridors, the release of detainees, [and] lifting the siege on Syrian cities”.

However, even the meeting of those conditions may not lead to a meaningful conference. The Coalition has been split over whether it should demand the departure of President Assad, a pre-condition that is being maintained by other opposition groups and by almost all factions in the insurgency.

Kerry and Lavrov also did not put forth a resolution of the question of whether Iran could be at the top table at the conference. The Russian Foreign Minister maintained the call for Tehran’s presence, but Kerry — who said last week that the Islamic Republic could “contribute from the sidelines”, an offer bluntly rejected by Iran — took no further step.

A series of photos show the Syrian Red Crescent assisting some of the thousands of stranded evacuees from Adra, northeast of Damascus.

The civilians were fleeing clashes in the town, taken by insurgents. Some are being held by regime authorities in the open air on the grounds of a cement factory. 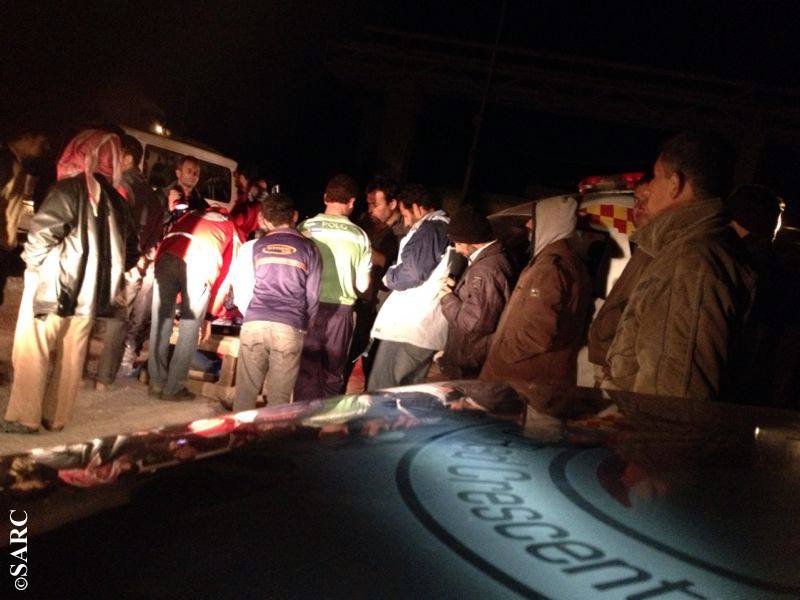 The site All4Syria posts a memorandum listing the names of the Assad regime’s delegation to the international conference in Switzerland on January 22.

Liwa Al Haq of the Islamic Front has said via its Facebook page that a statement circulating in the name of the Front and giving a 24 hour ultimatum to ISIS is a fake.

The statement which circulated with the Islamic Front’s official symbol, gives the Islamic State of Iraq and as-Sham: “We are setting ISIS a deadline of no more than 24 hours to stop its abuses, free the prisoners and hand over its weapons.”

A young man cries for help in the besieged Yarmouk camp in southern Damascus, “We just want to eat! We are on neither side!”:

The efforts of Palestinian organizationsto get aid to the camp this week have been futile.

Activists said that eight more people died in Yarmouk on Tuesday. Claims are circulating that 50 people have perished from lack of food during the siege.

Tucked away in a Wall Street Journal article, on fighting between insurgents and the Islamic State of Iraq and as-Sham, is this intriguing claim:

The opposition recently extracted one SRF (Syrian Revolutionaries Front) commander from the battlefields of northern Idlib province, where he was fighting ISIS, to meet with U.S. government officials in Istanbul. The commander, Jamal Marouf, appealed for help in arming the SRF.

In the meeting, U.S. officials said they worried that if they sent arms to the SRF, they could fall into ISIS hands, said opposition officials with knowledge of the meeting.

Other insurgent factions have distanced themselves from the SRF, formally created in November, because of claims that Maarouf and his men have been involved in theft and abuse of civilians. The SRF is suspected of raiding warehouses of the Free Syrian Army near the Turkish border in early December.

A series of videos document the regime’s continuing airstrikes on Darayya, near Damascus:

The Syrian military has been trying to break the insurgents in the area, southwest of the capital, for months.

There are reports from local field hospitals in Darayya on Tuesday morning that three people died and at least 13 more are injured after inhaling some sort of chemical gas in attacks that took place overnight, after regime forces attempted and failed to break through into West Darayya.

It is not clear what the chemicals might have been. Local activists talked only of “poison gas”.

Several videos of some of the casualties have been posted:

The regime has claimed “liberation” of Darayya on several occasions over the past year, including a photo opportunity of President Assad with troops in the suburb.

Syria’s Army General Command has issued a statement claiming the occupation of areas east of Aleppo city, such as al-Naqarin, al-Zarzour, al-Taaneh, al-Subeihieh, and Height 53.

The Army said, “This new achievement enhances the security of the area surrounding the International Airport of Aleppo and paves the way for eliminating all mercenary terrorists in Aleppo’s eastern and northern countryside.”

The military said it could now control the industrial zones near Aleppo and open roads to regime-held areas of the city.

Opposition activists said last weekend that regime forces had taken Naqarin, amid fighting between insurgents and the Islamic State of Iraq and as-Sham.