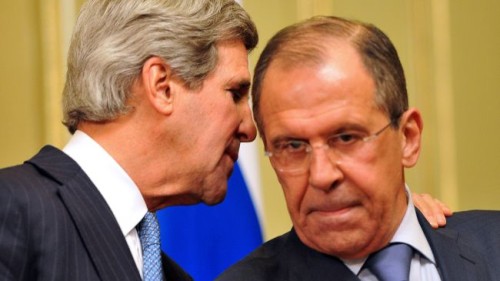 Russian Foreign Minister Sergei Lavrov told reporters in Paris on Monday that his meeting with US Secretary of State John Kerry and United Nations envoy Lakhdar Brahimi, regarding the propsed Geneva II conference were “very positive”.

Both the speech and the meeting were an attempt by Lavrov to regain control for Russia of diplomatic efforts over the Syrian crisis — specifically, to set the scene for President Assad to play a definitive role in the Geneva II talks.

But the Foreign Minister may have just illustrated the chasm between events on the ground in Syria and the language of “diplomacy” surrounding the conflict.

PRAISING ASSAD, HINTING AT THE REGIME’S PLURALISM, AND BLAMING THE OPPOSITION

Lavrov opened his speech by saying that the Syrian Government had already provided information about the delegation it plans to send to Geneva II — noting in a carefully-planned aside that the group “includes two women”, supporting Russia’s line that only Assad can guarantee a pluralistic Syrian society.

The Foreign Minister slammed the Syrian opposition, accusing them of delaying matters by dragging their feet about saying if they will attend Geneva.

Lavrov also said that Russia was working with the US — and, of course, with Assad — to open up aid convoys to “areas under regime and opposition siege”, including the Yarmouk Palestinian refugee camp in Damascus. He later added that the insurgents had prevented the Syrian Government from getting aid to Yarmouk on Sunday.

The remarks came as videos showed civilians attempting to flee Yarmouk, which has been under regime siege since July 2013, while Palestinian organizations attempted once again to get six lorries of food and medicine into the camp.

As he answered questions from reporters, Lavrov reiterated Russia’s line that there is no single Syrian opposition that stands against the Assad regime. Instead, according to Moscow, there is only a fragmented opposition, dominated increasingly by foreign fighters or groups sponsored by external interests and states.

Lavrov said that the Islamic Front are a “terrorist group”, which encourages foreign mercenaries to come fight in its ranks.

Saying this after a meeting with Kerry — with whom, Lavrov continued to stress, Russia is working closely — the Foreign Minister countered Washington’s attempt to open up a line of communication with the Front.

A BIZARRE JOKE THAT TURNED INTO A DIVERSIONARY TACTIC

During their meeting, Kerry presented Lavrov with two large potatoes.

The unusual gift caused some bemusement in the Russian Foreign Ministry and the Russian press. However, Kerry’s attempt at “potato diplomacy” had one benefit — it shifted focus to the Idaho produce rather than the substance of the meeting.

The Russian Foreign Ministry tweeted about the gift:

#idahopotato presented by @JohnKerry to Sergey #Lavrov: to be or not to be #luckypotato? @mfa_russia pic.twitter.com/QBOCm3FUVn

The head of the U.S. diplomatic corps gave his Russian counterpart two huge potatoes, which in size, shape, and color resembled loaves of rye bread. In front of an astonished press, Kerry pulled them out of a large, 50 centimeter long box, which he apparently found in the back of some warehouse in the American residence in Paris. Together with a dirty bag where he kept the tubers, the Secretary of State gave the box to a puzzled Lavrov, leaving the media to wonder what relation these potatoes, brought from the American heartland, had to the Iranian or Syrian track. However, in turn, Lavrov promised Kerry to repay him in cucumbers….

After chewing on the potato incident for some paragraphs, RG offered a small hint about came out of the meeting:

Lavrov’s visit to Paris will allow (him) to make adjustments if not to completely rewrite, the scenario of the “show” in Switzerland, to give the conference on Syria more pragmatism. According to RG’s source, if the Syrian opposition and the authorities in Damascus can come to the table to start discussions on humanitarian issues and a truce, the we need to adjust to the fact that this process will take a long time. Perhaps even years.

A translation of the main points of Lavrov’s speech and his answers to reporters’ questions:

We had very constructive talks – first bilateral talks with U.S. Secretary of State John Kerry and his delegation, and then with the participation of Syria envoy Lakhdar Brahimi. The focus of our discussions was on issues related to the preparation of Geneva II. UN Secretary General Ban Ki-moon has sent out invitations, and the Syrian Government has responded and given information about the composition of its delegation, which, incidentally, includes two women.

Now we are concerned about the delay that is continuing over corresponding steps from the opposition. Yesterday (January 12), I met with a delegation from the National Coalition led by A. Jarba. We outlined our concerns and called on the NC to determine its attitude, and cooperate with other opposition groups so that the delegation of those opposed to the regime would be truly representative, as required by the Geneva communique of June 30, 2012.

Today we agreed with John Kerry and Lakhdar Brahimi on several very important issues. First, we strongly advocate that Geneva II will convene on January 22, as previously announced.

Lavrov talks about how grateful he is that the UN is working on organization matters relating to the conference:

Secondly, we have a common position which we confirmed today, that Geneva II should be devoted to the full implementation of the Geneva communique of June 30, 2012. This involves resolving issues on the exchange of prisoners, the announcement of a ceasefire, the decision regarding the delivery of humanitarian aid to people in need
.
But we do not want, as I said to John Kerry, to postpone these acute problems until the conference. Whatever can be done before it gets started, we will do. Collectively we intend to try to send a signal to all Syrian parties regarding the need to achieve at least local cease-fire arrangements, reviewing lists that are exchanged between the parties regarding prisoners of war….

We are working to expand opportunities for humanitarian access to areas that are currently under a blockade. And under a blockage by government forces and the opposition…

The government announced its readiness to deliver humanitarian convoys today in Yarmouk and Barzeh, and to come to an agreement with opposition groups, and with support from Russia, the U.S. and the International Committee of the Red Cros ( ICRC), over the delivery of humanitarian assistance in areas of East Ghouta, and several other suburbs of Damascus.

We expect the same gestures on the part of the opposition in relation to those parts of Syria that they have blockaded… I emphasize that these are not pre-conditions… but steps to help alleviate the suffering of civilians. We want to do everything to facilitate this. We shall work in a coordinated manner with the government and the opposition.

Lavrov talks about the need to “ensure a positive response from the opposition to the invitation to participate in Geneva II”:

It is obvious to us that countries such as Iran and Saudi Arabia should also participate in Geneva II. We hope that eventually UN Secretary General Ban Ki-moon — he is sending out invitations to the conference — will send them to all those who influence the real development of the situation.

We are satisfied with the current negotiations. I think that in the remaining days until January 22, we will continue with our working contact, and will do everything to start the process (as John Kerry said, it will not be a one-time event, but a difficult path that will take some time) and guarantee the most important thing — direct dialogue with the Syrians themselves, with access to a general agreement about how they want to see their own state. We will help and contribute to this in every possible way.

Lavrov, answering questions from reporters, repeats that Iran should have a place at the conference and that the insurgency is fragmented and dominated by foreign fighters:

In Syria there are many groups, there is no clear front between government and opposition forces. The latter is fragmented. There are terrorists present, and their number is growing. There are the terrorist groups Jabhat al-Nusra, the Islamic State of Iraq and ash-Sham, and the Islamic Front. Militants often move from one group to another, probably depending on who pays more, there are plenty of foreign jihadi mercenaries.

I have read the charter of the Islamic Front, which encourages foreign jihadists to come to Syria and join its ranks. Attempts to represent this structure as opposed to the extremists are unjustified. There are no ideological differences between all of these organizations.

Of course, when we talk about the desirability of a local ceasefire and greater progress in opening up the blockades on villages to deliver humanitarian aid, all these factors need to be taken into account.

Until recently, the opponents of the regime the Free Syrian Army and the Islamic State of Iraq and ash-Sham. According to reports, this has weakened their position of late. All this must be taken into account because we do not want the terrorists to use the announcement of a ceasefire. This would be against everyone’s interests. Therefore, when deciding on a ceasefire and delivery of humanitarian assistance, all these circumstances should be taken into account. Now, there are examples of arrangements between various Syrian groups, for example, in the area of Moadamiyyah, where government forces and the opposition agreed to a ceasefire for the delivery of humanitarian aid. Today, the Syrian government are sending a humanitarian convoy to the Yarmouk Palestinian refugee camp. Such an attempt was already made a few days ago, but it was disrupted by the militants who blocked the passage of humanitarian transport. Today, the government will ensure the delivery of goods in one more area and is ready to negotiate over the operation with the ICRC assisted by the US and Russia on the transport of humanitarian supplies to the area of East Ghouta and several other suburbs of Damascus.