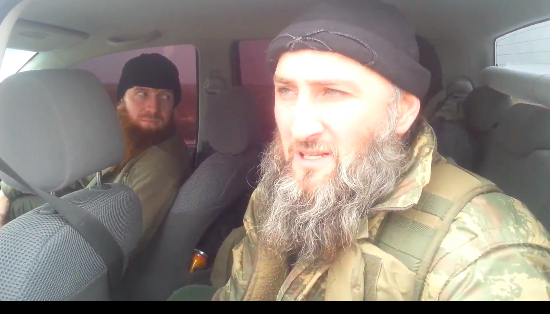 FiSyria, the website close to Chechen ISIS Emir Umar al-Shishani, offers a new report on the fighting between the Islamic State of Iraq and ash-Sham and other insurgent factions, particularly the Islamic Front, in the Aleppo town of al-Bab over the past days.

A video message posted on FiSyria shows Umar driving a car, while his second-in-command, Abu Jihad al-Shishani speaks to camera about the circumstances of the fighting. The video then shows Umar and other men freeing a group of around seven or eight civilians, from what FiSyria claims was an Ahrar ash-Sham prison.

The account provides some valuable context and information about the fighting in Al Bab, and the role of the Chechen military leaders of ISIS, albeit from the perspective of Umar and his faction.

In the first place, we learn that the insurgent factions fighting ISIS waited until Umar and his men had left Aleppo — we know from other sources that Umar traveled to Deir Ezzor to participate in a battle there — before they attacked, taking several ISIS checkpoints and capturing ISIS fighters.

On hearing of the events in Aleppo, Umar gathered a group of men and returned. En route, Umar and his fighters participated in several battles, including one to take a sugar factory and another to capture a dairy farm previously held by Ahrar ash-Sham. Umar and his fighters then battled in Al Bab itself, taking heavy casualties and with many ISIS fighters being taken prisoner.

We learn that ISIS took heavy losses and that a large number of ISIS fighters have been taken prisoner during the fighting.

We also learn that some of Umar’s men carried out suicide attacks including the two pictured on the left and right of this photograph. The man on the right is named as Abu Khajar from Saudi Arabia. 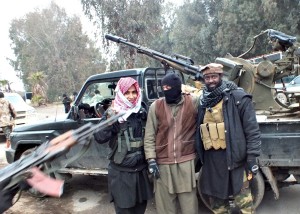 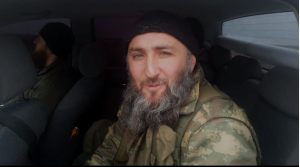 As it became clear earlier, the factions Liwa al-Tawhid, Liwa Islamiya, Ahrar ash-Sham and another five small groups united under the name Jabhat al-Islamiya (Islamic Front) against the Islamic State of Iraq and ash-Sham.

Taking advantage of the moment when the mujahideen had left Aleppo on an operation, they secretly, without forewarning, started to capture ISIS checkpoints, to kill mujahideen and to take women prisoner.

The first thing that they did was to capture six posts along the road to Aleppo. Having learned about the treachery of these traitors, Umar al-Shishani gathered together a column and headed back, in order to decisively deal with those had all the time convinced us, “We are with you, we love you!”.

Along the road, several checkpoints, a sugar factory, a dairy farm (around 3,000 heads of cattle) were liberated, which had previously been controlled by Ahrar ash-Sham.

(FiSyria has posted photographs of the cattle in the dairy farm.)

The attack on the sugar factory took place at night. Two groups of 15 men attacked from both sides. One of the groups got lost and wound up in a river, which they had to cross, in order to reach their goal. Everyone started to take off their undergarments. The water was sufficiently cold, so that some people couldn’t go into it. After the last mujahid had taken off his things, the leader shouted, “Come here! There’s another road.” Everyone understood that this was a test from the Almighty Allah.

The traitors abandoned their positions, where according to approximate data there were about 40 men. After, several of them were taken prisoner. One talked to us that when he was asked, why did you run away? Then he said with surprise, “What should we have done, when there were 1,000 men chasing us?”

On the next day, the column of mujahideen reached the town of Al Bab. Before reaching the appointed spot, there was a shoot out with Liwa al-Tawhid, they left their cars and ran across the field in fear.

The shoot out lasted five days. Every day, the mujahideen took new points. Over 100 apostates were killed in ten days, more than 150 were taken prisoner. Ten guys became martyrs.

Two bases of Liwa al-Tawhid, one base of Liwa al-Islam were located on the same territory. There was a prison there, where they locked up the prisoners. According to them, they wound up there, when they couldn’t pay the checkpoint to cross.

Many criminals fled the town. Some of them mingled with the local population. After long searches in the houses, weapons, rockets and assault vests. The fighting continued. We, with the help of the Almighty, will inform you, our dear brothers and sisters. Do not forget us in your du’ a.

Abu Jihad Shishani is speaking to camera. Umar al-Shishani is sitting in the driver’s seat.

The video was shot on January 13.

Abu Jihad said that Allah has brought them to this land to spread his word.

“But there are several forces here, so to speak, who do not want the Sharia of Allah. They try to hold us by the throat so we cannot spread the law of Allah.”

Abu Jihad says that now, the time has come for a victory over these people. He points out of the car at a column of vehicles that he says is heading to fight.

He says that around 50 of their men were killed in the fighting, and around 100 were taken prisoner, but that they plan to liberate their comrades.

Abu Jihad adds that those who wish to have the religion of Allah in force in Syria should come from their lands to help.

The cameraman then turns to the opposite side of the road from where Umar and Jihad have parked up. We can see a line of cars, some of which are carrying armed men and heavy weaponry.

See Also:
Site Close To Abu Umar al-Shishani “Today They Want to Get Rid of ISIS, Tomorrow Other Mujahideen”