Syria: How Did Raqqa Fall To The Islamic State of Iraq & ash-Sham? (Syria Untold) 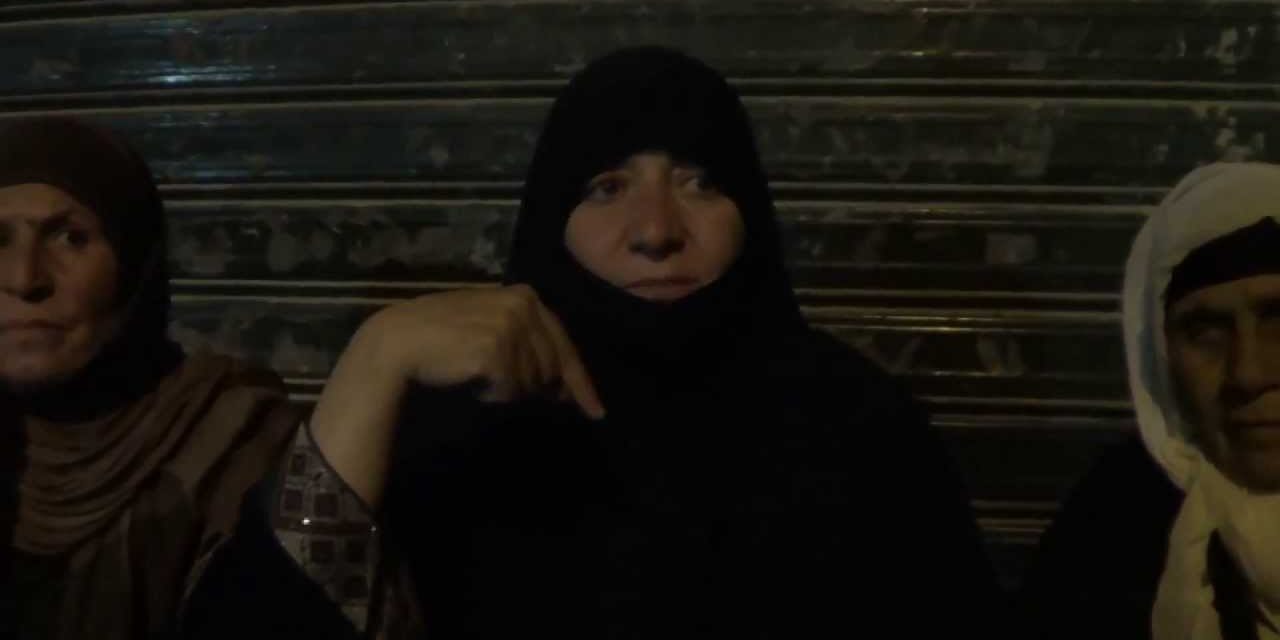 Syria Untold, a site created and run by a group of Syrian journalists, activists, programmers, and writers who live both in Syria and abroad, has published an account of how the city of Raqqa ended up under the control of the Islamic State of Iraq and ash-Sham.

Syria Untold describes how Raqqa, the first major Syrian city to be taken by the insurgents from regime control, ended up being taken over by ISIS.

The account describes how various groups, including Jabhat al-Nusra, attempted to increase soft power in Raqqa by winning over the hearts and minds of locals, including by distributing propaganda via local mosques.

Syria Untold hint that local activists in Raqqa, who they say continued their work, are partly responsible for ISIS’s rise in power, as was infighting between the town’s two local councils; while the FSA “balked” in the face of the foreign-fighter led extremist faction. Meanwhile, after Raqqa was taken over by the Syrian opposition, activists stayed out of politics: two different town councils were formed in Raqqa after insurgents took control of the town in March 2013, “with no input from the activists”.

Although local activists were a powerful force, they “tried to steer clear from the political, administrative and financial divisions” in Raqqa, and instead “focused their work on cultural, humanitarian and awareness campaigns”. The activists even formed an umbrella group to consolidate their power, but this resulted in a quagmire of bureaucracy.

When ISIS took over Raqqa, the continued infighting between the two town councils had helped weaken Raqqa’s leadership. ISIS were swift to end any dissent against its rule,

A local activist is quoted as saying that, “”our own cowardice allowed ISIS to grow. We never had the courage to call their crimes, even though we knew they were behind it. Our fear brought even greater fear to the average citizens of the town.”

Syria Untold end with a warning: “This dark assessment, however, will provide valuable lessons to help the activists as they prepare to go back to their town when ISIS is eventually pushed out.”

In the last few weeks fierce battles have been fought between different brigades of the Free Syrian Army, and the radical Islamist group known as the Islamic State of Iraq and Syria (ISIS). These latest developments were met with celebrations among the opposition who has grown extremely frustrated with ISIS’s grip on power, and its tyrannical rule in areas under its control. Nevertheless, the more salient questions on how ISIS managed to consolidate so much power, in so little time, are yet to be answered.

After looking into how Islamist currents in general managed to infiltrate revolutionary structures like the local coordination committees, Syria Untold will attempt to untangle the complex story of how ISIS placed its hand on what will become its main power base, the city of Raqqa in northeast Syria.

In late March 2013 Raqqa was the first major city to be completely liberated from regime presence. The euphoria and optimism at the future at the time was so rampant among the local activists that they declared Raqqa to be an “icon of the revolution”. The first few months saw a great deal of activities in the town, but the situation soon started to deteriorate. Jabhat al-Nusra retreated from the town and ISIS took its place. ISIS quickly set out on an intimidation campaign against local activists and journalists in the city, forcing many of them to flee for fear of detention, torture and assassination. Almost overnight, Syria’s finest example of nation-building in the post-Assad period, turned into a nightmare.

The city of Raqqa fell into the rebel’s hands on March 4, 2013 after fierce battles between the opposition militias -composed mainly of the Ahrar al-Sham Brigade and to a lesser degree, al-Nusra Front- and the regime’s army. Al-Nusra soon set up its headquarters in the city’s town hall, taking advantage of the preoccupation of the FSA with battles up the field. The vacuum left by the fleeing regime forces was filled by local activists who formed several groups, including Our Right and the Raqqa Free Youth Assembly. These groups took the responsibility of cleaning, rehabilitating and administering the town at the time.

While local activists were busy with their work on the ground, different groups started consolidating their position and jockeying for influence behind the scenes. Al-Nusra front, which rarely featured on the front lines, undertook a soft approach to infiltrate the town through handouts and influencing local mosque Imams. At the same time, two simultaneous and competing town councils were formed. The first, presided on by Saad Fahd al-Shweish, was elected from local figures, but with no input from the activists. The second, led by Abdullah Khalil, was formed by the Syrian National Council (SNC) and declared from the town of Urfa in Turkey.

Disagreements between the two councils soon came to the fore, with the first insisting on the administrative nature of their role, while the second looking to serve a politically-driven agenda. The SNC-back council also caused outrage because of its open hostility to the Kurdish population, especially in the Tell Abyad region.

Many attempts to unite the two competing councils failed. This bickering gave al-Nusra ample opportunity to quietly, but steadily, strengthen its presence in the city. Nevertheless, the activists’ power also grew at this time with more than 32 youth groups active in the town by June 2013. These groups tried to steer clear from the political, administrative and financial divisions that rocked the city’s administrators, and focused their work on cultural, humanitarian and awareness campaigns.

During this period the activists were extremely effective in their work and garnered important public support that helped them against the encroachment of militia groups in the town. According to one activist, “any militia that dared assault the activist groups had to face massive demonstrations and sit ins until they they relented.” The activists recounts two main examples of this: the first when mass demonstrators forced the Ahfad al-Rasoul brigade to relent and free a detained activist, and the second when al-Nusra Front was forced to free another four activists held by the militia.

To help organize their work and coordinate their efforts, the activists formed an umbrella group under which they all worked: “Forces of the Revolution” group. However, according to the activist, this had the opposite effect of creating a needless web of bureaucracy that sucked in the most active of them, leaving a void on the ground. This was crucial in stripping the activists of their main support, their local communities.

Abu Bakr al-Baghdadi, the leader of ISIS, captured Raqqa, in a bloodless move, from al-Nasra Front who retreated to the town of al-Tabaqa. This set the stage for an unequal confrontation between ISIS and the significantly weakened civil society forces in the town. The situation was compounded by the ongoing bickering between the two city councils and allowed ISIS to assert its control over life in the city. Additionally, the FSA, occupied in the battles against the 17th Division on the front, balked in the face of ISIS and avoided any military confrontation with it.

Lacking any form of resistance, ISIS subjected the city to a reign of terror through a policy of arbitrary detentions and systematic torture. At this stage civil work and protest in the city had almost come to a complete halt, with the few exceptions of brave individuals like Souad Nofal who stood up to ISIS. The next phase of ISIS’s rule involved a systematic manhunt against all local notables, activists and city council members including Abdullah Khalil, Firas al-Hajj Saleh, Ibrahim al-Ghazi.

ISIS soon started applying their own rules on the city including special taxes on commercial establishments in return for protection, strict laws for women’s dress codes as well as interfering in the educational process to segregate female and male schools with heavy fines imposed on those that defy them at first, while later arresting them as heretics and shutting down the institutions.

From then on, ISIS became increasingly confident of its control. On October 17, 2013, the group invited local social and religious notables to a meeting. The meeting featured 300 people from Raqqa as well as representatives from ISIS to discuss the militia’s policies. ISIS was subjected to fierce criticism from two main local notables, Hazim al-Hussein and Muhannad Habayebna, who accused the militia of perpetrating crimes and thefts around the city. Within four days, both individuals were murdered in crowded areas. This represented ISIS last blow and pushed any remaining activists in the town to flee to the nearby Turkish town of Urfa.

In his assessment of the situation during ISIS’s term, a local activist felt that “our own cowardice allowed ISIS to grow. We never had the courage to call their crimes, even though we knew they were behind it. Our fear brought even greater fear to the average citizens of the town.”

He added: “Even today, I am frightened of revealing my identity because my family might be in danger. Nevertheless, our fear made us lose the community’s confidence and support. Before, you would see thousands standing up in the face of the militias’ encroachments. Today, only a handful dared speak up in defence of burned churches or detained activists.”

This dark assessment, however, will provide valuable lessons to help the activists as they prepare to go back to their town when ISIS is eventually pushed out.