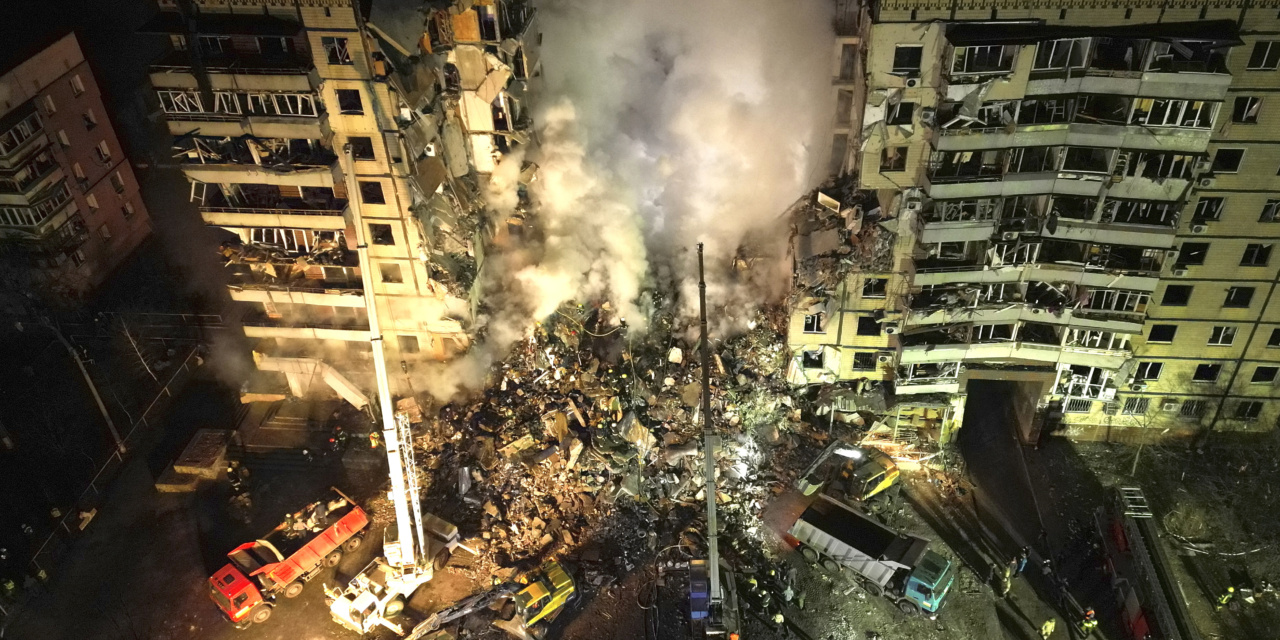 The death toll in the Dnipro apartment block destroyed by a Russian missile has risen to 29.

Ukraine President Volodymyr Zelenskiy has updated the toll from the Russian missile strike on the apartment block in Dnipro: 25 killed, including a 15-year-old girl; 73 injured, including 13 children; 39 residents rescued; 43 missing.

A scene from Dnipro….

A young woman is rescused from under rubble in Dnipro after her screams were heard.

She had been under concrete for 18 hours. pic.twitter.com/3r2RStKO6j

The toll from Russia’s missile strike on Dnipro in east-central Ukraine, levelling an apartment block, has risen to 21 killed and 73 injured.

Four of the wounded are in serious condition. Rescuers are still clearing rubble and searching for 35 people after 72 apartments were destroyed and 230 damaged.

❗️Those most important moments of silence when rescuers heard the voice of a woman from under the rubble. There is only deathly silence around.

Ukrainian rescuers work all night, because they know that under tons of concrete there are still people who need to be rescued. pic.twitter.com/A0ZD4qA8SL

The nine-story apartment block was hit in the afternoon during the second wave. The Ukraine military said the Russians used an X-22 cruise missile.

As a crane removed rubble, residents in their apartments used their phones to catch the attention of rescue workers.

A 15-year-old girl was among those killed, and 14 children are injured. Another 38 people were pulled from the destruction.

More videos from the scene of the tragedy in the #Dnipro. Rescue work continues. pic.twitter.com/e3ulk0hgZg

Ukraine’s Air Force said Patriot air defense systems are needed to down Russia’s X-22 missiles — about 210 of which have been fired during the 10 1/2-month invasion — before they reach their targets.

Last month the Biden Administration said it will send a Patriot system to Ukraine.

ORIGINAL ENTRY: The UK has committed to a delivery of 14 Challenger battle tanks to Ukraine to “push Russian troops back”.

Prime Minister Rishi Sunak confirmed the supply, as well as 30 AS-90 self-propelled guns, after a call with Ukraine President Volodymyr Zelenskiy on Saturday.

Always strong support of the UK is now impenetrable and ready for challenges. In a conversation with the Prime Minister, @RishiSunak, I thanked for the decisions that will not only strengthen us on the battlefield, but also send the right signal to other partners.

The British commitment is likely to open the way to a significant — perhaps conflict-changing — supply of heavy battle tanks to Kyiv.

It was preceded in the past 10 days by confirmation of advanced infantry fighting vehicles to Ukraine. The US committed to 50 Bradleys, which can destroy Russian tanks. France is providing AMX RC-10s, and Germany — after months of argument over the supply — said it will send Marders.

On Wednesday, Poland announced provision of German-made Leopard battle tanks, but Berlin must consent to the export.

Warsaw pointedly signalled that its delivery is “part of building an international coalition”, and the UK announcement amplifies this. The US may now commit to the despatch of Abrams battle tanks. Some German Ministers, notably Foreign Minister Annalena Baerbock, are indicating that they now favor meeting Ukraine’s months-long request for Leopard 2s.