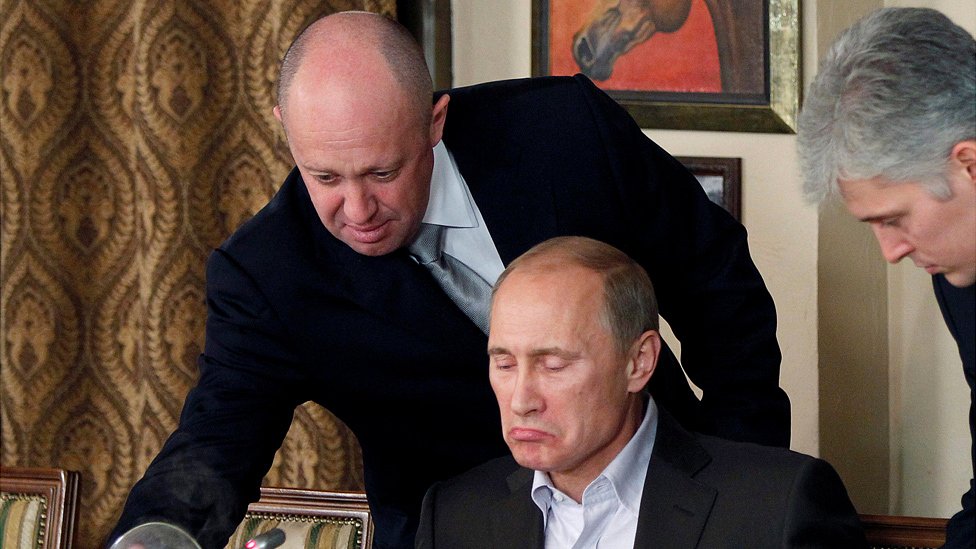 Yevgeny Prigozhin, the founder of Wagner Group mercenaries, with Vladimir Putin in 2011 (Reuters)

The toll from Russia’s missile strike on a residential building in Dnipro has been raised to five killed and 27 injured, including six children.

Another person was killed and one wounded in the nearby city of Kryvyi Rih in the Dnipropetrovsk region.

A Russian missile has heavily damaged an apartment block in Dnipro in east-central Ukraine, trapping people under rubble.

At least 10, including two children, have been injured. Three are in serious condition. Fifteen others were rescued from the destruction.

Kyrylo Tymoshenko, deputy head of the President’s office, said, “[Russians] are just inhumans. At least one stairwell is gone. Under the rubble there are people who were at home for the holiday.”

❗️ Video from the place where a missile hit a residential building in #Dnipro. It is reported that screams of people can be heard from under the rubble.

According to the Deputy Head of the Office of the President of #Ukraine Kyrylo Tymoshenko, 15 people were already rescued. pic.twitter.com/6p0dRZTMZv

Ukrenergo told consumers, “We remind you that this is a consequence of massive Russian missile and drone attacks on the energy infrastructure.”

Prime Minister Rishi Sunak has confirmed the UK will provide heavy battle tanks to Ukraine to “push Russian troops back”.

Always strong support of the UK is now impenetrable and ready for challenges. In a conversation with the Prime Minister, @RishiSunak, I thanked for the decisions that will not only strengthen us on the battlefield, but also send the right signal to other partners.

Earlier this week Poland committed itself to supply of German-made Leopard battle tanks, but Berlin must consent to the export.

Politico Europe details how “Halfway through the first winter of Europe’s energy war with Russia, only one side is winning” — and it’s not Moscow.

In September — as he declared “annexations” of four Ukrainian regions, ordered a mass mobilization, and stepped up missile and drone strikes — Vladimir Putin said Europeans would “freeze” if they did not end support for Kyiv.

More than three months later, European wholesale gas prices have fallen from above €200 ($217) per megawatt hour — about 10 times higher than in 2021 — to €65 ($70). European storage facilities are 82% full, the same level as in September. On January 1, stocks were about 31 billion cubic meters higher than a year ago.

Meanwhile, Russia is losing €160 million ($173.5 million) each day because of G7 and European Union price caps on Russian oil imports.

Prominent Russian actors Dmitry Nazarov and Olga Vasilyeva have been fired by the Chekhov Moscow Art Theater because of their opposition to Vladimir Putin’s invasion of Ukraine.

On February 26, two days after the launch of the invasion, Nazarov posted a video on his YouTube channel in which he and Vasilyeva performed the song “Do Russians Want Wars?”.

Since then, Nazarov has regularly posted videos on social media of his recitations of anti-war poetry.

Russia has fired a wave of missiles on Ukraine for the first time in almost two weeks.

Four explosions were heard in central Kyiv on Saturday morning. For the first time since Russia’s escalation of strikes on October 10, the blasts came before air raid sirens sounded.

Oleksiy Kuleba, the Kyiv region’s governor, said 18 houses were damaged and a fire contained at a critical infrastructure facility.

Air raid sirens also sounded in the Cherkasy, Poltava, Sumy, and Chernihiv regions. In the Mykolaiv region in southern Ukraine, Governor Vitaly Kim said 17 Russian Tupolev bombers had taken off from their airbases.

Even as Russia declared “victory” in the small town of Soledar in eastern Ukraine, political and military in-fighting worsened in Moscow.

Yevgeny Prigozhin, the founder of the Wagner Group mercenaries, is trying to use the operations in the east to gain power and influence at the expense of the Russian Defense Ministry.

Earlier this month Prigozhin staked his claim with videos of his visit to the frontline. He used meetings with his mercenaries not only to praise them but to criticize the military leadership in Moscow.

On Monday, Prigozhin prematurely claimed that Russian forces controlled all of Soledar, 10 km (6 miles) of the city of Bakhmut in the Donetsk region. He stirred up more trouble with the Defense Ministry by proclaiming that only Wagner fighters were involved in the assault.

On Wednesday, Vladimir Putin appeared to balance between the factions by appointing the Chief of the General Staff Army, Gen. Valery Gerasimov, as the overall commander of the Ukraine invasion. Gen. Sergey Surovikin, supported by Prigozhin, was demoted and become one of Gerasimov’s three deputies.

Meanwhile the Defense Ministry pushed back on Prigozhin’s claim of Wagner’s exclusive role in the conquest of Soledar: “Airborne Troops have blocked Soledar from the northern and southern parts of the city. The Russian Aerospace Forces strike at enemy strongholds. Assault squads are fighting in the city.”

But rather than backing away, Prigozhin said the Defense Ministry was spreading “fake information”. Wagner released a video in which two men, purportedly Airborne Forces officers in a underground bunker, said, “The assault on the city of Soledar was carried out only by the forces of PMC [Private Military Company] Wagner. We were not even sent in that direction.”

On Friday, Prigozhin complained about “infighting, corruption, bureaucracy and officials who want to stay in their positions”, with constant attempts to “steal victory” from Wagner.

The Defense Ministry replied with a “clarification” to appease Prigozhin “As for the direct storming of Soledar’s city quarters occupied by the armed forces of Ukraine, this combat task was successfully accomplished by the courageous and selfless actions of volunteers from the Wagner assault detachments.”

Fighting on Outskirts of “Insignificant” Soledar

The Ukrainian military maintained that there were still “battles in Soledar”, attacked by Russia since last August. President Chief of Staff Andriy Yerma compared the fighting to World War I’s bloody battle of Verdun and said, “Our fighters manage to hold their positions.”

But Taras Berezovets, a captain in the Ukrainian Special Forces First Brigade, confirmed that defenders had pulled out of the town center and were in the western outskirts.

He explained that staying in the center of the town made no military sense: “[It is] completely destroyed. There is no single building which survived Russian shelling.” Units were remaining as long as possible to kill Wagner mercenaries, but a decision to withdraw is expected in the coming days.

Bearing out the assessments of analysts, he said withdrawal from Soledar will affect the ability of Ukrainian forces to resupply Bakhmut, which Russia has tried to overrun to overrun since May. Two major roads into Bakhmut remain in Ukrainian hands and Ukrainian jets are bombing Russian positions.