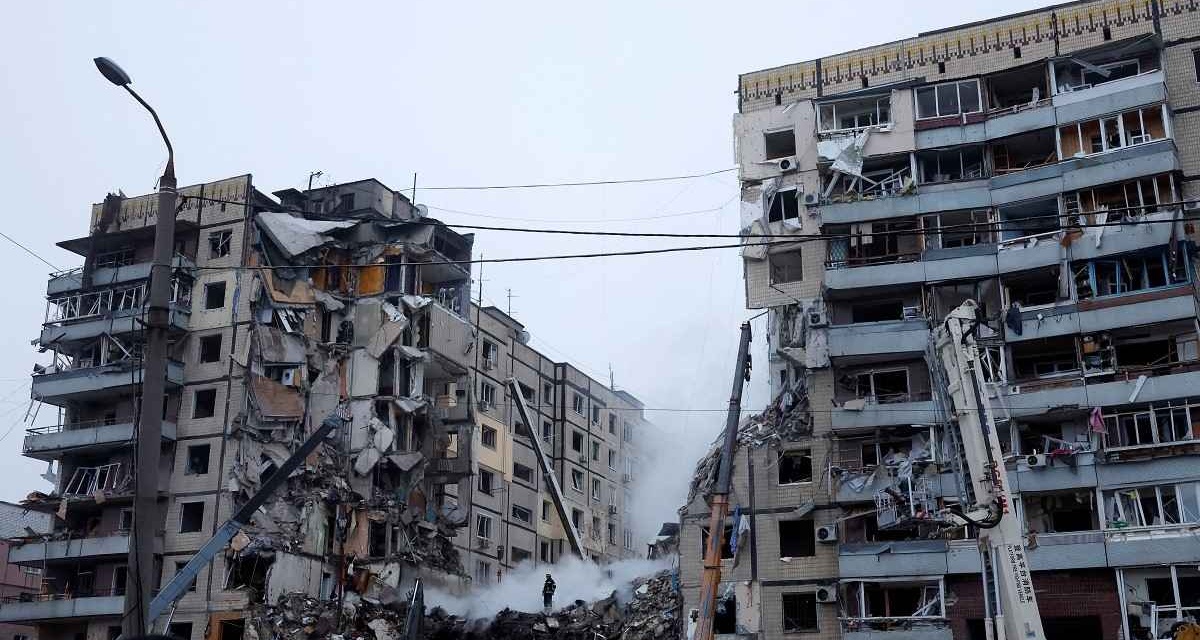 The UK has confirmed a package of military assistance to Ukraine including a squadron of 14 Challenger 2 battle tanks.

Defence Secretary Ben Wallace told the House of Commons of the “important increase to Ukrainian capabilities”.

It means [Ukraine] can go from existing to expelling Russian forces from Ukrainian soil. President Putin cannot win, but he’s equally certain he can continue inflicting this wanton violence and human suffering until his forces are ejected from their defensive positions and expelled from the country.

It has been reported that obviously Poland is very keen to donate some Leopards, as is Finland. All of this currently relies on the German government’s decisions – not only whether the Germans will supply their own Leopards, but whether or not they’ll give permissions to others. I would urge my German colleagues to do that.

The death toll has risen to 40 in the Dnipro apartment block destroyed by a Russian missile on Saturday.

Germany’s Defense Minister Christine Lambrecht has resigned amid criticism of her hesitancy over support of Ukraine.

In recent weeks, other German ministers — notably Foreign Minister Angela Baerbock — have pushed for an increase in military assistance. Berlin has authorized the supply of Marder infantry fighting vehicles, following similar decisions by France and the US, and is considering the provision of Leopard 2 heavy battle tanks.

Lambrecht’s position was also unsettled when Germany’s defense capabilities were questions after several Puma infantry tanks were put out of service during a military drill.

She was also challenged over a New Year’s Day message on social media, set against background noise from firecrackers, in which she spoke about pleasant personal encounters as well as the Russian invasion of Ukraine.

Three people were killed and 14 injured by Russian shelling of the Kherson region in southern Ukraine on Sunday.

A Russian rocket has injured five civilians in Zaporizhzhia city in southern Ukraine.

The rocket struck next to a five-story building. Two children, aged 9 and 15, were hospitalized when they were hit by glass fragments.

Another rocket started a fire at a business site. No information about victims is available yet.

#Russian invaders attacked residential buildings in #Zaporizhzhia this night. There are casualties. pic.twitter.com/vJzLfNa2SL

Three troops have been killed and 16 wounded by a grenade explosion on a military base in western Russia.

Another eight men are missing after the incident in the Belgorod region.

Emergency services said a sergeant accidentally detonated a hand grenade in sleeping quarters as he tried “to gain authority in front of his subordinates”, setting off an explosion of ammunition.

The sergeant survived and is in hospital.

In his nightly address to the nation, Zelenskiy spoke of rescuers continuing to find victims from Saturday’s attack with an anti-ship X-22 cruise missile. He then addressed Russians:

Your cowardly silence, your attempt to “wait out” what is happening will only end with those same terrorists coming after you one day.

Evil is very sensitive to cowardice.

Evil always remembers those who fear it or try to bargain with it. And when it comes after you, there will be no one to protect you.

Two children were among those killed, and six are among 73 injured. The toll is expected to rise further as more than 30 people are still missing.

Maria Lebid, 15. Another victim of Russian rocket strike on Dnipro.

Maria's mom was at work that day.
RIP, Maria. pic.twitter.com/ggwqxUHdwy

Zelenskiy pointed to action against those complicit in the mass killing:

I think it is right that today there is a decision to expand our sanctions against Russian citizens and other persons who help terror.

Almost 200 – this list is carefully prepared, and behind each name there is a responsible motivation. Those who justify terror. Those who grease the Russian propaganda machine. Those who tried to sell Ukraine somewhere in Moscow….We will do everything to make the sanctions work on the largest possible scale – in Europe, in the world.

Everyone will be held to account for terror: both those who kill and those who help to kill.

Olga and Iryna. Dentists and volunteers. They treated our Defenders, including those who returned from captivity.

They are two of the victims of yesterday's Russian attack on Dnipro – the women were walking past the building to a gym.