Ukraine War, Day 323: Battle Tanks On The Way to Kyiv 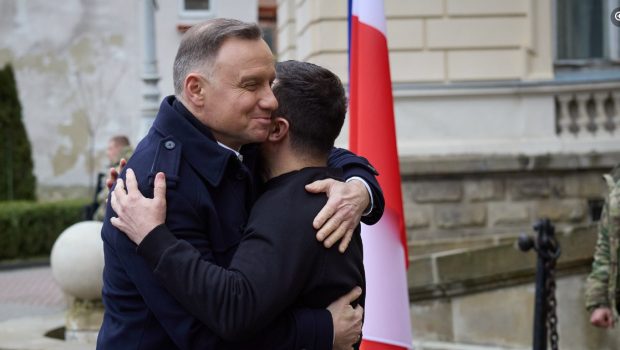 A scene from northeast Ukraine….

The photo was taken in Staryi Saltiv, #Kharkiv region. The only bridge was destroyed by the invaders, so people are forced to cross to the other side with the help of boats.

Vladimir Putin has humiliated Trade and Industry Minister Denis Manturov on State TV over a lack of aircraft contracts.

Putin told the Minister to speed up the process of aircraft orders, saying that contracts should be completed within a month.

When Manturov said the ministry was ready to build helicopter engines in St Petersburg, Putin told him that there were too many delays.

A Russian soldier has been sentenced, by a court in the city of Ufa, to five years in prison for refusing to fight in Ukraine.

Marsel Kandarov, 24, did not report for duty in May. He was detained by police in September.

After a meeting with Ukrainian counterpart Dmytro Lubinets in Ankara, Turkey, Moskalkova said 40 prisoners from each side would be freed.

But she said Thursday that her comments were “misunderstood” and that she was referring to “exchanges [that] already happened”.

Moskalkova said she and Lubinets had swapped lists of wounded soldiers in preparation for a possible future exchange.

Vladimir Putin has reportedly authorized pardons for Russian convicts put on Ukraine’s frontlines by the Wagner Group of mercenaries.

Eva Merkacheva, a member of the Russian Human Rights Council, said on Monday that the prisoners receive pardons before they are released from penal colonies for deployment.

Merkacheva said Putin’s decree for the pardons is classified as an official state secret.

Wagner Group founder Prigozhin announced pardons on January 5 for the first group of convicts returning from the frontlines.

A Russian conscript has been sentenced to 5 1/2 years in prison after complaining to his superiors about poor training conditions.

The case is the first public punishment of a soldier criticizing Vladimir Putin’s mass mobilization from September.

Leshkov asserted, “You are sabotaging the commander-in-chief’s direct orders. You should be arrested.”

Russia’s Wagner Group mercenaries claim they have found he body of one of two missing British humanitarian workers in eastern Ukraine.

Andrew Bagshaw and Christopher Parry were reported to have gone missing last Friday as they travelled from Kramatorsk to Soledar on the frontline in the Donetsk region.

Wagner’s social media channels did not give the name of the dead man but said documents belonging to both Britons had been found on his body. A photo showed passports with the names of Bagshaw and Parry.

The press service of Yevgeny #Prigozhin claims that the body of one of the two missing #British citizens was found on January 11. In addition, documents of both Britons were found with him. pic.twitter.com/fsX949WdTZ

Ukraine President Volodymyr Zelenskiy has pushed back the claim of Yevgeny Prigozhin, the founder of Russia’s Wagner Group mercenaries, that his fighters have occupied the small town of Soledar in the Donetsk region in eastern Ukraine.

The terrorist state and its propagandists are trying to pretend that some part of our city of Soledar…is allegedly some kind of Russia’s achievement.

They will present – and are already presenting – this to their society in such a way as to support mobilization and to give hope to those who support aggression.

But the fighting continues. The Donetsk direction is holding out.

The Kremlin pulled back from Prigozhin’s claim on Wednesday, with spokesman Dmitry Peskov saying, “Let’s not rush, let’s wait for official statements. There is a positive dynamic in progress.”

The Ukrainian military claimed this morning that artillery and a missile strike killed more than 100 Russian troops near the town.

Soledar is 10 km (6 miles) north of Bakhmut, which the Russians have tried to overrun since last May.

The Institute for the Study of War notes that, even if Soledar falls:

The Russian discussion about the imminent capture of Bakhmut and the collapse of Ukrainian defensive lines are divorced from the current operational reality in the Bakhmut area, where Russian forces remain far from severing Ukrainian ground lines of communication needed to encircle Bakhmut.

Inside Soledar, the site of heavy battles between Ukraine and Russia – in pictures

The city of Soledar in Ukraine’s eastern Donbas region has seen days of heavy fighting as Ukraine strives to repel Russian forces from around Bakhmuthttps://t.co/wAFNWum2Ff pic.twitter.com/fNuL6czJLS

ORIGINAL ENTRY: Poland has signaled a significant change on the Ukraine battlefield, announcing that it will send German-made heavy battle tanks to Kyiv “as part of building an international coalition”.

On a visit to Lviv in western Ukraine, where he met Ukrainian President Volodymyr Zelenskiy, Polish President Andrzej Duda pledged a company of Leopard tanks.

Even more important was Duda’s indication that Warsaw’s step is only part of the multilateral provision of the tanks, sought by Zelenskiy and Ukraine’s military for months.

Prime Minister Mateusz Morawiecki had said on Saturday that Poland would not send the Leopards without the formation of the wider coalition. On Monday, Polish Deputy Foreign Minister Paweł Jabłoński said, “We encourage other countries to form a broad coalition for the transfer of more modern tanks to Ukraine, such as Leopard tanks.”

French officials followed up by telling journalists that Paris hopes for Germany’s direct supply of Leopard 2s before a Franco-German summit on January 22.

Germany offered no public response to the Polish announcement on Wednesday. A Government spokesperson says it was not aware of any requests from allies to send the tanks, but is coordinating closely with the US, France, UK, and elsewhere over military support for Ukraine.

In a further sign of the multilateral maneuvering, a UK Government spokesperson said Prime Minister Rishi Sunak has asked Defence Secretary Ben Wallace to “work with partners” over further support to Ukraine “including the provision of tanks”.

The Kremlin has shaken up its military commanders yet again, announcing that the Chief of the General Staff, Gen. Valery Gerasimov, is now overall commander for the Ukraine invasion.

The US-based Institute for the Study of War sees two motives in the restructure of command, beginning with “an intended decisive Russian military effort in 2023” with the likelihood of “resumed Russian offensive operations”. Vladimir Putin may also “perceive the threat of further Ukrainian counteroffensive operations in 2023”.

The shake-up is equally important as “a political decision to reassert the primacy of the Russian [Defense Ministry] in an internal Russian power struggle”.

Yevgeny Prigozhin, the founder of the mercenary Wagner Group, has been promoting himself as an effective leader of operations. Contrasting himself with Defense Minister Sergey Shoygu, Prigozhin has done a video tour of the frontline in eastern Ukraine, announcing that his mercenaries are the lead force — and in some cases, the only force — pursuing a Russian offensive.

On Tuesday, Prigozhin declared that Wagner fighters had finally taken control of the small town of Soledar, 10 km (6 miles) north of Bakhmut in the Donetsk region in eastern Ukraine. The claim was rejected by President Zelenskiy and the Ukrainian military, and the Kremlin stepped back from it later in the day.

Gen. Surovikin was a public favorite of Prigozhin, so “Gerasimov’s elevation is likely in part a political move to weaken the influence of the broadly anti-MoD siloviki faction and a signal for Prigozhin and other actors to reduce their criticism of the MoD”, says the ISW.

The analysts conclude that the latest change of command is unlikely to reverse the tide against Putin’s invasion:

Gerasimov is unlikely to rapidly revitalize and reform Russia’s conduct of the war in Ukraine to achieve Putin’s maximalist objectives. Gerasimov signed off on Putin’s fundamentally flawed initial invasion plans before February 24 and largely faded into obscurity following the collapse of Russia’s flawed initial planning assumptions.

Gerasimov is highly unlikely to successfully meet Putin’s unrealistic expectations for his performance….[He] will likely preside over a disorganized command structure plagued by endemic, persistent, and self-reinforcing failures that he largely set into motion in his initial role before the invasion of Ukraine.