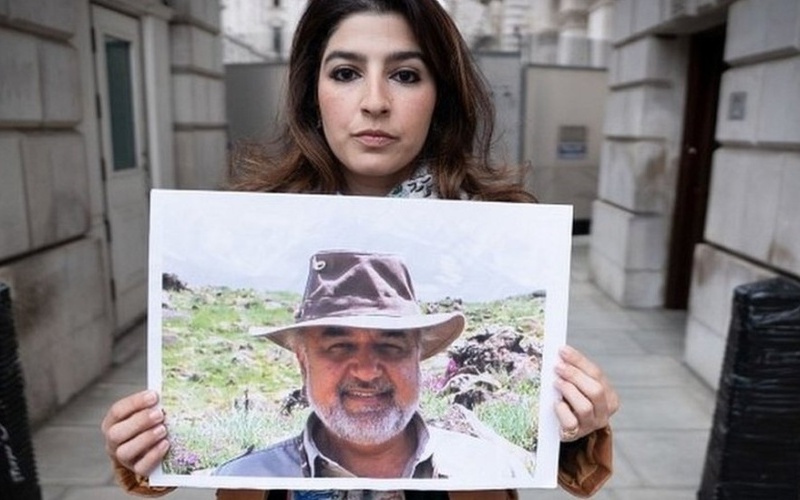 Roxanne Tahbaz holds a photo of her father Morad, imprisoned in Iran since January 2018 (PA)

After IAEA Resolution Over Its Non-Compliance, Iran Steps Up Production of 60% Uranium

The UN Human Rights Council has convened an urgent meeting to discuss an international investigation into the Iran regime’s repression and killing of protesters.

“I call on the authorities immediately to stop using violence and harassment against peaceful protesters,” said Volker Turk, the UN High Commissioner for Human Rights.

Noting that Iran is in “a full-fledged human rights crisis”, Turk told the Council’s 47 members:

The unnecessary and disproportionate use of force must come to an end….The security forces….have used live ammunition, birdshot and other metal pellets, tear gas and batons….

Accountability is a key ingredient of the pursuit of justice for human rights violations.

Turk said more than 300 people have been killed during the protests. Norway-based group Iran Human Rights puts the toll at more than 400, including more than 50 children.

The meeting was requested by Germany and Iceland with the backing of more than 50 other countries.

The draft resolution says an investigating commission should include “the gender dimensions of…violations”. The inquiry will “collect, consolidate, and analyze evidence of such violations, and to preserve evidence.”

Iran’s leading Sunni cleric, Molavi Abdul Hamid, has again challenged the regime over its repression and killing of protesters.

Abdul Hamid is the Friday Prayer leader of Zahedan in Sistan and Baluchestan Province in southeast Iran. Security forces have killed more than 100 people in the area since September 30, spurring the cleric’s resistance.

In the past week, Abdul Hamid has shown solidarity with the protests in Iranian Kurdistan in the northeast, where the regime is deploying military forces and at least 30 people have been slain in the past week.

The cleric tweeted on Wednesday, “The dear Kurds of Iran have endured many sufferings such as severe ethnic discrimination, severe religious pressure, poverty and economic hardships. Is it just to respond to their protest with war bullets?”

Jalal Mahmoudzadeh, an MP from the mainly Kurdish city of Mahabad in northwest Iran, says he is being summoned by Iran’s judiciary repeatedly over his support of protests.

“The judiciary has raised a complaint against me as a representative of the mourning people instead of conserving the legal rights of the protesting people and the families of victims in Mahabad and Kurdish cities,” Mahmoudzadeh tweeted on Wednesday.

Amid the reported killing of about 30 people in Iranian Kurdistan in the past week, the Revolutionary Guards deployed in Mahabad over the weekend.

The US Treasury has added three Iranian security officials to its sanctions list.

The three officials are in Kurdistan Province — the starting point for the demonstrations over compulsory hijab and the death of Mahsa Amini, a native and resident of the region, in police custody. They are Governor Hassan Asgari and Alireza Moradi, the commander of security personnel in the city of Sanandaj; and Revolutionary Guards commander Mohammad Taghi Osanloo, who has overseen the military deployment in the city of Mahabad.

Iranian authorities say they have arrested a UK-Iranian citizen in Isfahan Province in the center of the country.

State media said, “The Revolutionary Guards’ Intelligence Organisation arrested a British-Iranian citizen who communicated with the BBC and Iran International.”

For years before the current nationwide protests, now in their 10th week, the Iranian regime has waged a campaign against foreign outlets such as Voice of America’s Iran service, BBC Persian, and Saudi-funded Iran International. Staff have been intimidated and their families threatened. Any Iranian who appears on the channels, or is even in contact with them, risks detention.

The Iranian judiciary said earlier this week that 40 foreign nationals have been arrested during the protests. At least seven French citizens are behind bars.

The regime has also held Britons as political prisoners for years. In March, Nazanin Zaghari-Ratcliffe was freed after almost six years in detention or house arrest, and Anousheh Ashouri after 4 years and 7 months. Morad Tahbaz, one of nine environmentalists imprisoned in January 2018, is still behind bars.

See also Zaghari-Ratcliffe: “I Should Not Have Been in Iran Prison for Six Years”

A strike at an automobile manufacturing plant in Bahman in northern Iran:

Defying the regime’s arrests of filmmakers and actors, another female director has expressed solidarity with protests through a statement and photo of herself without a headscarf.

The Revolutionary Guards have declared a new round of strikes on Iranian Kurdish positions in northern Iraq.

The Guards said they fired missiles and drones on targets near Kirkuk.

With Iranian Kurdistan the origin and center of nationwide protests, the Guards have been attacking Iranian Kurdish bases and refugee camps since late September, killing at least 16 people and wounding more than 50.

On Sunday, attacks on the Erbil and Soleimani Provinces killed two people and injured eight.

Iran’s judiciary has declared the convictions of 2,432 people during the 10 weeks of nationwide protests sparked by compulsory hijab and the death of Mahsa Amini, 22, in police custody.

Spokesman Massoud Setayeshi said another 1,118 people have been indicted and are awaiting trial.

Setayeshi did not give the number of arrests. Human rights activists say more than 17,000 people have been detained since the protests began on September 16, hours after Amini passed away following her detention and reported beating by “morality police”.

However, the spokesman confirmed the detention of prominent figures in recent days, including actors Katayon Riahi and Hengameh Ghaziani after they posted photos of themselves without head coverings on social media. He threatened that other celebrities will be prosecuted if they say “false and unsubstantiated words”.

The judiciary said on Tuesday that 40 foreign nationals have been detained during the protests. Interior Minister Ahmad Vahidi proclaimed that they had played “a major role” in the unrest.

Responding to the killings of protesters by security forces across Kurdistan in northwest Iran (see 1118 GMT), students at the Kurdistan University of Medical Sciences post a banner, “Death to [Supreme Leader Ali] Khamenei”, and chant “Death to the Dictator”.

Football’s international governing body FIFA has policed circulation of the video of Iranian footballers refusing to sign the national anthem at the World Cup, claiming copyright violation. However, this clip — so far — is available on Twitter.

Iran’s hardline newspaper Kayhan, whose editor is named by the Supreme Leader, did not take the 6-2 defeat by England very well:

With protests surging across Kurdistan, the Kurdish human rights group Hengaw says at least 13 people have been killed in the region in northewest Iran since November 20: seven in Javanrud, four in Piranshahr, and one each in Dehgolan and Bukan.

Video of civilians shot and injured in Javanrud:

Another video shows numerous additional citizens in Javanroud being shot by the IRI forces and suffering injuries.

This is the Islamic Republic of Iran's massacre against Kurdistan.

Iranian refugees have spoken to CNN about sexual violence by security forces against detained protesters.

The refugees, having crossed the border into northern Iraq, spoke of the assaults. “Hana”, a Kurdish-Iranian woman, said she both witnessed and suffered the sexual violence in detention: “There were girls who were sexually assaulted and then transferred to other cities. They are scared to talk about these things.”

CNN says it verified accounts from survivors and sources both in and outside Iran. At least one assault caused severe injury, and another involved the rape of an underage boy. In some cases, the attack was filmed and used to blackmail the victim into silence.

Armita Abbasi, 20, was detained in mid-October in Karaj, west of Tehran. Regime officials said she was “the leader of the riots” with “10 Molotov cocktails” in her apartment.

On October 17, Abbasi was rushed to the Imam Ali hospital in Karaj, accompanied by plainclothes officers. Her head was shaved and she was shaking violently. Medical staff, four of whom leaked the story to social media, said they saw evidence of brutal rape.

When she first came in, [the officers] said she was hemorrhaging from her rectum… due to repeated rape. The plainclothes men insisted that the doctor write it as rape prior to arrest.

After the truth became obvious to all, they changed the whole script.

Iranian officials said Abbasi was treated for “digestive problems”. She is still detained in Fardis Prison in Karaj.

Hana, who was held in a detention center in Urmia in northwest Iran, spoke of a girl taken into an interrogation room. When her teenage brother demanded taht he join her to make sure nothing “was happening to her”, he was beaten with batons. Meanwhile, his sister was screaming in the interrogation room.

Female cellmates told her they had been raped in the police station. Hana was spared was spared when her father arrived to bail her out, just after she was taken for questioning.

She notes that other women were were denied bail and disappeared into a system including secret detention centers at military bases.

In audio testimony, a 17-year-old boy who said he and his friends were raped and electrocuted in detention.

They brought four men over who had been beaten, screaming intensely in another cell. And one of the men who was tortured, was sent to the waiting room where I was.

I asked him what all that screaming was about? He said they are raping the men.

A security guard who overheard the conversation proceeded to torture the boy, who was then raped.

ORIGINAL ENTRY: In a powerful statement, Iran’s national football team has used the opening of the World Cup to stand with protests over rights and justice that are now in their 10th week.

On the pitch in Qatar for their match with England, players refused to sing the Islamic Republic’s anthem. Tight-lipped, they put their arms around each other’s shoulders and stared straight ahead. Meanwhile, some Iranians in the stands cried. Another held up placards such as “Woman. Life. Freedom”, the mantra of the protests, and “Iranian Women” with a heart.

Iranian State TV did not broadcast the footage.

After the match, team captain Ehsan Hajsafi switched from silence to a firm expression of solidarity with the demonstrations, sparked by the death of 22-year-old Mahsa Amini in police custody on September 16 after she was detained and reportedly beaten by “morality police”.

⚡️ BREAKING: #Iran football team captain defies regime, backs protests: “We have to accept that conditions in our country are not right & our people are not happy. They should know that we are with them. And we support them. And we sympathize with them regarding the conditions.” pic.twitter.com/SX4kenXiTZ

We have to perform the best we can and score goals and dedicate those goals to the people of Iran who are feeling hurt.

Iranian State media, which had hoped to use the World Cup to rally people against the protests, limited itself to brief reports on the game.

But regime officials will need to decide before Friday, when Iran play Wales, if they will take any action to curb and possibly punish the players.