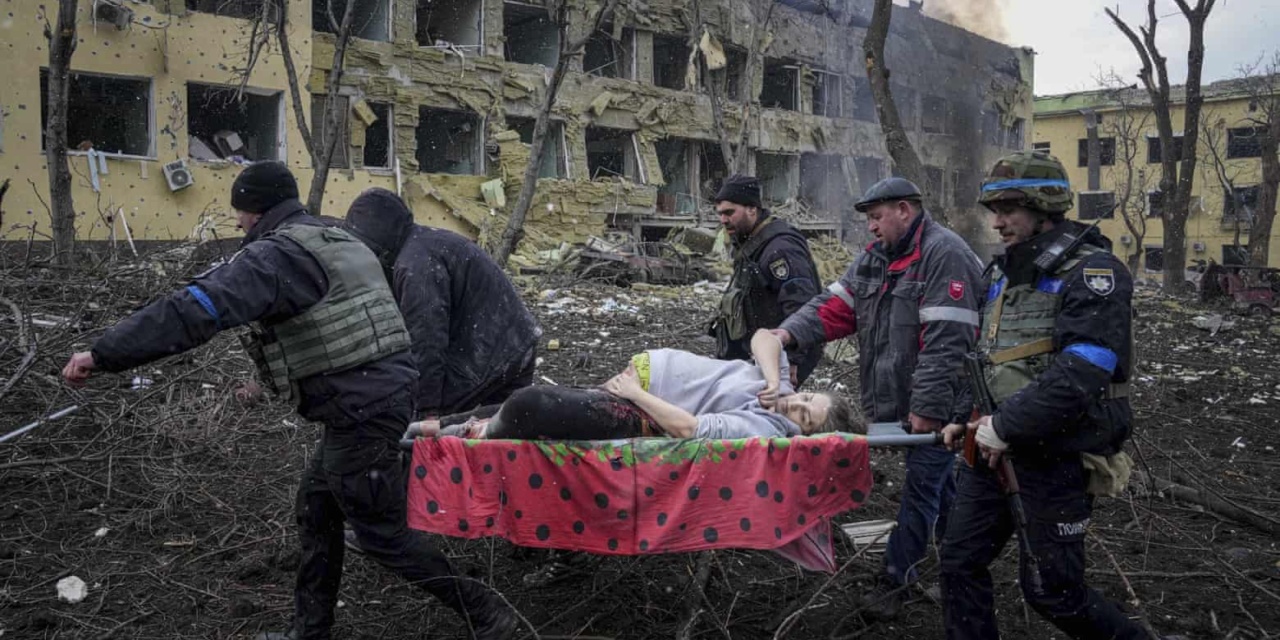 The US has announced another $400 million in military aid to Ukraine, including weapons, munitions, and air defense equipment.

More than 200 generators are being delivered to help Ukraine deal with power outages caused by Russian attacks.

Ukraine will not be scared by cowardly inhumane terrorist attacks of Russian war criminals. Thank you @POTUS and 🇺🇸 people for standing with Ukraine and responding with a new PDA package which would allow us to save lives and continue our fight for Ukraine! Together we win!

In a video on Instagram, President Volodymyr Zelenskiy has assured that “unbreakable” Ukrainians will “get through all of this”, rebuilding infrastructure damaged by Russian missile strikes.

He noted the juxtaposition of the strikes and terrorism:

Today, the European Parliament recognized Russia as a terrorist state….And then Russia proved that all this is true by using 67 missiles against our infrastructure, our energy grid, and ordinary people.

The President said Ukraine will request an urgent meeting of the UN Security Council to discuss the latest Russian strikes.

Kyiv Mayor Vitaly Klitschko spoke of the energy crisis caused by the strikes:

We must also prepare for the worst scenario. That would be if there were widespread power cuts and the temperatures were even colder. Then parts of the city would have to be evacuated, but we don’t want it to come to that….

Putin wants to terrorize people, make them freeze, without light. But that won’t happen. My impression is that people will only get angrier, more determined. We will not die or flee as Putin wants.

He said he expects the toll to rise.

The Ukraine military said Russia launched 70 missiles, 51 of which were shot down, and 5 attack drones.

Ukraine and Russia have completed another prisoner exchange.

A Ukrainian civilian and 35 troops were freed in return for 35 Russian POWs.

Returned 36 our citizens from the Russian captivity, one civilian and 35 military personnel.
Among them are Mariupol and "Azovstal" defenders, as well as national guards captured at the Chernobyl nuclear power plant in early days of the invasion. pic.twitter.com/q8eX5NCICz

The power units of three Ukrainian nuclear power plants have been switched off after today’s Russian missile strikes.

The State nuclear agency Energoatom said emergency protection was activated at the Rivne, Pivdennoukrains, and Khmelnytskyi nuclear power plants: “They work in project mode, without generation into the domestic energy system.”

The site of the European Parliament was taken down on Wednesday afternoon by a cyber-attack, hours after MEPs voted 494-58 to label Russia as a state sponsor of terrorism.

Parliament spokesperson Jamie Duch announced the DDOS (Distributed Denial of Service) event. He said, “EP teams are working to resolve this issue as quickly as possible”, but the site is still offline.

The @Europarl_EN is under a sophisticated cyberattack. A pro-Kremlin group has claimed responsibility.

Our IT experts are pushing back against it & protecting our systems.

This, after we proclaimed Russia as a State-sponsor of terrorism.

Kyiv Mayor Vitaly Klitschko says three people, including a 17-year-old girl, have been killed by Russian missile strikes. Another 11 people have been injured.

Authorities in Kyiv have confirmed the killing of three person and wounding of six in Russian missile strikes on Kyiv.

Some of the casualties were in a two-story residential building damaged by the attacks.

6he entire Kyiv region is without electricity and the water supply has been cut off in the capital.

Lviv in western Ukraine is also “without light”, says Mayor Andriy Sadovyi, and there are “interruptions” with the water supply.

Russia celebrates its recognition as terrorist state with new missile terror against Ukraine’s capital, other cities. Should be clear to those who still had doubts: Russia must be recognized as terrorist state worldwide and Ukraine must get all necessary air defense systems ASAP.

Neighboring Moldova has also been affected, with Deputy Prime Minister Andrei Spinu reporting a “massive” blackout and State energy firm Moldelectrica repairing more than 50% of the country to electricity.

Russia’s attacks on Ukraine’s energy infrastructure have left Moldova in the dark, again.

Massive blackouts across the country, including Chisinau and the @MoldovaMFA building.

I instructed that Russia’s ambassador be summoned for explanations.

Russia has launched another wave of missile and rocket strikes across Ukraine.

Air raid sirens have been sounded throughout the country, with missiles filmed, explosions heard, and power cut in regions such as Kyiv, Kharkiv, Mykolaiv, and Dnipro.

Kyiv Mayor Vitaly Klitschko, confirmed a strike on critical infrastructure. One person has been injured.

While someone is waiting for World Cup results and the number of goals scored, Ukrainians are waiting for another score – number of intercepted Russian missiles. A new massive attack on 🇺🇦 infrastructure facilities is underway. In NASAMS, IRIS-T and Air Defense Forces we trust.

The European Parliament has designated Russia as a “state sponsor of terrorism”.

MEPs voted 494-58, with 44 abstentions. They cited Russia’s “deliberate physical destruction of civilian infrastructure and mass murder of Ukrainian civilians with the aim of eliminating the Ukrainian people”. The conclusion was supported by the documentation of more than 34,000 war crimes by Russian and Russian proxy troops.

The resolution also noted “terrorist acts” such as Russia’s supplying of weapons to the Assad regime and Moscow’s deliberate atttacks on Syrian civilians; the attempted assassination of Sergey and Yulia Skripal with Novichok nerve agent in March 2018; and the downing of Malaysian Airwarys flight MH17 over eastern Ukraine in 2014, killing 298 passengers and crew.

The Parliament urged the European Union’s 27 member states to adopt the designation “with all the negative consequences this implies”.

Ukraine President Volodymyr Zelenskiy, who has pressed for months for the designation, tweeted:

I welcome @Europarl_EN decision to recognize Russia as a state sponsor of terrorism and as a state which uses means of terrorism. Russia must be isolated at all levels and held accountable in order to end its long-standing policy of terrorism in Ukraine and across the globe.

Today, the European Parliament recognized Russia as a state sponsor of terrorism and as a state which uses means of terrorism. I am grateful to @Europarl_EN for this crucial step which strengthens the international isolation of Russia and rightfully confirms its pariah status.

Ukraine President Volodymyr Zelenskiy has written on Facebook about this morning’s Russian missile attack on a maternity hospital which killed a newborn:

Instead, it will only be held to account for all the evil it has brought to our country.

A woman was injured by the blast, and rescuers pull two survivors from rubble.

Zelenskiy also posted that two people were killed and one injured by Russian shelling of a high-rise building and a clinic in Kupyansk — liberated by Ukrainian forces in September — in eastern Ukraine.

One baby is confirmed dead after Russians bombed a maternity hospital last night in Zaporizhia.

Here, a doctor is being rescued from the rubble. pic.twitter.com/B56dJyaDjZ

The latest Russian attacks across the Donetsk region in eastern Ukraine have killed one civilian and injured eight.

The US has committed another $4.5 billion to the Ukraine Government to provide essential public services and to sustain its budget.

The announcement came hours after the European delivered another 2.5 billion euros ($2.57 billion) in assistance.

Amid Russian attacks which have knocked out half of Ukraine’s energy grid and the onset of winter, President Volodymyr Zelenskiy says “invincibility centers” will be set up around the country to provide electricity, heat, water, internet, mobile phone connections, and a pharmacy.

If massive Russian strikes take place again and if there is an understanding that the electricity supply cannot be restored within hours, the work of “Points of Invincibility” will be activated. All basic services will be there, including electricity, mobile communications and the Internet, heat, water, and a first-aid kit. Absolutely free and 24/7….

Local authorities are tasked with informing people about the existence of “Points of Invincibility”. It should be very simple: in government buildings, in pharmacies, grocery stores, in post offices, there should be information about where a person can find support in the event of a long-term power outage.

ORIGINAL ENTRY: A Russian missile has struck a maternity ward in a hospital in southern Ukraine, killing a newborn.

The missile was fired on the city of Vilniansk in the Zaporizhzhia region early Wednesday morning.

A Russian missile struck the maternity ward of the Vilnianska Hospital near Zaporizhzhia early on Nov. 23, Governor Starukh wrote on Telegram. A newborn baby was killed in the attack.

Russia has attacked hundreds of medical facilities throughout its 9-month invasion. The World Health Organization’s surveillance system recorded 688 assaults from February to October 2022.

In March, the Russians bombed a children’s and maternity hospital in the port city of Mariupol in southeast Ukraine, killing three people at the time and injuring 17. A pregnant woman and her baby who were in the facility died later.