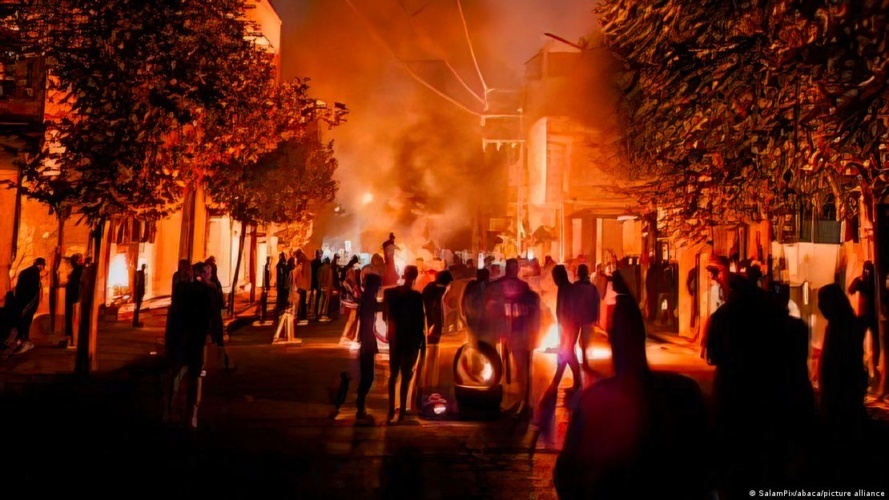 A protest in Mahabad in Iranian Kurdistan in the northwest of the country, November 2022 (SalamPix/Abaca/Picture Alliance)

Authorities have banned the Jahan-e Sanat newspaper after it published an interview with leading political scientist Sadegh Zibakalam in which he criticized the use of force against protesters.

Jahan-e Sanat was also banned in 2020 when it published an interview, with a former member of Iran’s Coronavirus Task Force, which questioned the official figures of the country’s cases and deaths.

Zibakalam has been recurrently threatened with prison sentences by Iran’s leadership over his analysis of political and social issues.

Sunni clerics in Kurdistan have issued a call for a referendum in Iran, under international monitoring, on the future of the Iranian system.

A hospital director in Gorgan in northern Iran has openly protested an attack of special and uniformed forces on the facility.

Some of the troops really seemed to be in a special mental state, they were so aggressive and ready to fire that if they saw someone, they would bring a baton to his head, and even the commanders themselves had a hard time controlling them.

He said that in the midst of “conflict and beatings” by the officers, his attempts to persuade them to leave or put down their weapons were unsuccessful. Employees, patients, and visitors rushed to a crowded emergency room.

The doctor said the attackers took away one person.

In a show of solidarity with protests, players on Iran’s national football team have refused to sing the Islamic Republic’s anthem before their opening match of the World Cup.

The starting 11 stood silently on the pitch in Qatar before the match with England, while people in the crowd held up placards with “Iranian Women” and a heart.

Iranian State TV did not broadcast the footage.

Protests have resumed on Monday across Iranian Kurdistan, with marchers remembering those who have been killed by security forces.

Yet another day of protest marches and politically charged ceremonies for slain protesters gets underway in Iranian Kurdistan, November 21. Here is Piranshahr, a city I travelled through frequently during my days covering Iraq. Via @PDKIenglish pic.twitter.com/BcCQK7TLHT

Security forces are reportedly attacking in some areas.

Regime opens fire with live ammunition against protesters in Jwano, in Iran’s Kurdish region. It’s part of an attempt to push armed Kurdish rebels to counter attack and hand-deliver to Khamenei the separatist war the regime craves pic.twitter.com/kbi9Uo76Ed

Struggling to suppress the protests in Iranian Kurdistan, Iran’s regime has launched another missile and drone attack on Kurdish positions in northern Iraq.

The Hamza Sayyid al-Shuhada base of Iran’s Revolutionary Guards fired across the border on the Iranian Kurdish opposition groups in Iraq’s Erbil and Sulaimani Provinces.

At least two people were killed and eight injured. One of the slain was a member of the Kurdistan Democratic Party of Iran.

The mayor of Koya town in Erbil Province, Tariq Haydari, said at least three missiles targeted the KDPI headquarters near Koya. One hit the building and the other two hit an adjacent refugee camp.

The KDPI said in a statement:

US Central Command responded, “Such indiscriminate and illegal attacks place civilians at risk, violate Iraqi sovereignty, and jeopardize the hard-fought security and stability of Iraq and the Middle East.”

We repeat: The Netherlands strongly condemns the ongoing missile and drone attacks in the Kurdistan Region in Iraq. We support the demand of authorities to respect the sovereignty of Iraq and call to end this import of violence from the region into KRI.

After the strikes, the commander of the |Revoltuionary Guards ground forces, Mohammad Pakpour, threatened the Kurdish groups, “Either clear your bases, or wait for our next attacks.”

After the start in mid-September of Iran’s nationwide protests, beginning in the Kurdistan region, the Revolutionary Guards carried out a series of attacks on the Iranian Kurds in northern Iraq, killing at least 16 and injuring 50.

ORIGINAL ENTRY: With nationwide protests in their 10th week, Iran’s regime is struggling to maintain its authority in the Kurdistan region in the northwest of the country.

The demonstrations began in Kurdistan on September 16 after Mahsa Amini — a native and resident of Saqqez in the region — died in police custody following her detention and alleged beating by “morality police” for “inappropriate attire”.

The protests challenged compulsory hijab and have expanded in their pursuit of rights and justice in the Islamic Republic. Some demonstrators are now calling for the removal of Iran’s leaders, including the Supreme Leader.

The regime has responded with a crackdown including mass detentions, the cutoff of communications, and the killing of almost 400 people, including scores across Kurdistan.

But the demonstrations have continued, and on Saturday the regime deployed military forces in Mahabad, a city of about 175,000 people. The Oslo-based Kurdish human rights group Hengaw said military helicopters brought in Revolutionary Guards units.

Despite the attempt by authorities to restrict the Internet, video on Sunday showed military units roaming the streets.

This morning in Mahabad. Military forces roam the streets of the city, and shoot directly at the windows of residential. Horrific and indiscriminate violence and killings! #MahsaAmini #مهسا_امینی #مهاباد #IranRevolution pic.twitter.com/4b9A8wp5v3

Hengaw said at least four protesters were killed by security forces across Kurdistan. Claims circulated of the slaying of a teacher and a 16-year-old girl.

Linking the escalation with the nationwide protests, Iran’s leading Sunni cleric, Molavi Abdol Hamid, tweeted, “Disturbing news is emerging from the Kurdish areas, especially from Mahabad….Pressure and crackdown will lead to further dissatisfaction. Officers should refrain from shooting at people.

Abdol Hamid is the Friday Prayers leader of Zahedan in southeast Iran, where security forces have killed at least 93 worshippers and protesters, including at least 66 on September 30.

The cleric has been increasingly vocal in his challenge to the regime, blaming officials including the Supreme Leader for the killings. Earlier this month, a delegation was despatched to Zahedan to try and contain him, but the effort appears to have failed.

Iranian State media insisted on Sunday that calm had been restored. However, videos testified to further demonstrations.