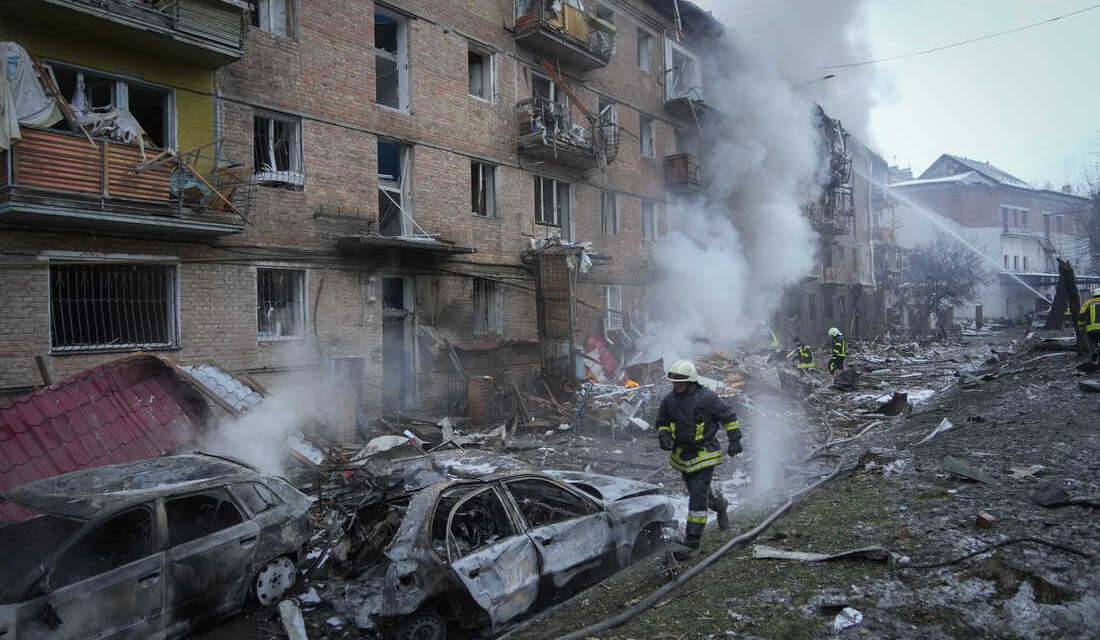 One of the reactors at the Khmelnytskyi nuclear plant has been reconnected to the country’s power grid.

Water supply has been fully restored in Kyiv.

Ukraine and Russia have completed their second exchange of prisoners within a week.

We have managed to bring back 19 defenders of Mariupol…as well as 15 prisoners (of war) from the Chornobyl nuclear power plant and seven from Zmiiny [Snake] Island.

Blackout continues. No electricity and heating in most cities. Lack of communication makes it impossible to check in with friends and family. Nuclear plants expected to start operating tonight when power is likely to be restored.
📹 Invincibility point in Kherson. pic.twitter.com/mQr16HbOUV

“Three sources with knowledge of the meeting” say Russian and Ukrainian delegations met in Abu Dhabi in the United Arab Emirates last week, discussing a prisoner exchange linked to a resumption of Russian ammonia exports to Asia and Africa via a Ukrainian pipeline.

The renewed export of Russian ammonia could be linked to a longer-term arrangement for the lifting of Russia’s blockade of Ukrainian Black Sea ports and their exports of grains and other agricultural products.

Moscow reluctantly agreed last week to a six-month extension of the July deal, brokered by the UN and Turkey, after threatening to withdraw at the November 19 deadline.

On Wednesday, Ukraine confirmed the release of one Ukrainian civilians and 35 troops in exchange for the return of 35 Russian POWs. There was no mention of any link with Russia’s exports.

The Ukrainian ambassador to Turkey, Vasyl Bodnar, said he had no knowledge of the UAE meeting. However, he explained, “Releasing our prisoners of war is part of negotiations over opening Russian ammonia exports. Of course we look for ways to do that at any opportunity.”

Almost 3,000 miners have been rescued after power outages caused by Russian strikes across Ukraine on Wednesday.

The rescues in the Dnipropetrovsk region in central Ukraine concluded early Thursday.

Governor Valentyn Reznichenko said power has been restored to half of households but “blackouts will continue to minimize the load on the power grid”.

Aftermath of the Russian missile strikes on Kyiv….

National police posted video showing aftermath of the russian missile strike in the Kyiv region. This is real hell pic.twitter.com/GNYfGNBTkb

But despite the damage and blackouts from Russia’s missile strikes, the music still played on Wednesday night….

Even the absence of electricity caused by yet another massive russian rocket attack cannot stop our musicians. Today's concert in the Column Hall of the National Philharmonic of Ukraine in Kyiv was held by candlelight and light from flashlights and smartphones. pic.twitter.com/W0JDXqp7Ss

Kyiv Mayor Vitali Klitschko says 70% of the capital is still without power.

Klitschko said water supply has been restored to the left bank of the city, and he hopes it will return to the right bank by mid-day Thursday.

A Russian court has extended the detention of Moscow city councillor Ilya Yashin by six months.

Yashin said in court, “I love my country and in order to live here I am ready to pay with my freedom. I am a Russian patriot.”

Air defenses downed 51 of the missiles. However, those that reached targets knocked out power across the country, already without half of its electricity grid because of waves of Russian assaults since October 10. Three nuclear plants were taking off-line, joining the Russia-occupied Zaporizhia Nuclear Power Plant, the largest in Europe.

Ten people were killed across Ukraine. Seven were slain and 36 injured in the Kyiv region alone.

Three civilians perished and 15 were wounded when a missile hit a two-story residential building in Vyshgorod, a northern suburb of the capital. The explosion carved a three-meter crater in front of the high-rise, destroyed nearby apartments, blew the tops of nearby trees, and demolished a children’s playground.

The toll would have been higher, but a kindergarten on the lower ground floor of the building was evacuated after air raid sirens sounded.

The barrage came hours after the European Parliament, in a 494-58 vote, designated Russia as a “state sponsor of terrorism” because of its “deliberate physical destruction of civilian infrastructure and mass murder of Ukrainian civilians with the aim of eliminating the Ukrainian people”. The conclusion was supported by the documentation of more than 34,000 war crimes by Russian and Russian proxy troops.

Ukraine President Volodymyr Zelenskiy linked the developments, “Today, the European Parliament recognized Russia as a terrorist state….And then Russia proved that all this is true by using 67 missiles against our infrastructure, our energy grid, and ordinary people.”

Late Wednesday he addressed the UN, saying that Ukraine would introduce a resolution condemning “any forms of energy terror”.

It’s nonsense that the veto right is secured for the party [Russia] that wages this war. We cannot be hostage to one international terrorist….

When we have the temperature below zero, and scores of millions of people without energy supplies, without heating, without water, this is an obvious crime against humanity.

By the end of Wednesday, power had been restored in 90% of Ukraine, including cities such as Lviv in the west and Odesa in the south. The Kyiv administration said water and heating will return to residential buildings on Thursday morning.

“There Must Be Accountability”

At the UN, the head of political affairs Rosemary DiCarlo demanded that Russia halt the attacks and emphasized, “There must be accountability for any violations of the laws of war.”

US Ambassador Linda Thomas-Greenfield explained that Vladimir Putin was “weaponizing winter to inflict intense suffering on the Ukraine people”.

But Russia’s Ambassador Vassily Nebenzia was unrepentant, as he implictly acknowledged that the strikes were the outcome of Putin’s failed invasion: “Strikes against infrastructure [are] in response to the unbridled flow of weapons to Ukraine and the reckless appeals of Kyiv to defeat Russia.”