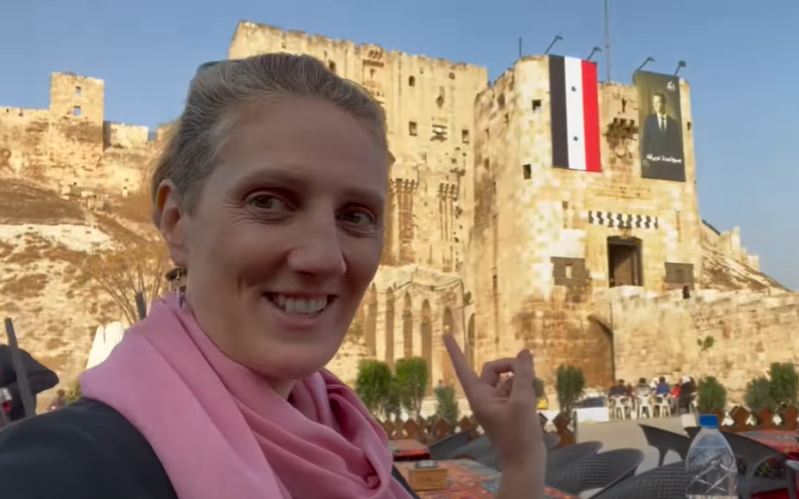 Throughout its 11 1/2-year effort to repress Syria’s uprising, the Assad regime has welcomed and supported foreign tourists who would promote its propaganda and disinformation lines.

There was the British delegation in 2018, led by two members of the UK House of Lords and organized by an Anglican priest. There was 2019’s “Third International Trade Union Forum for Solidarity with the Workers and People of Syria”, including disinformation warriors Max Blumenthal and Rania Khalek as well as Ajamu Baraka, the US Green Party’s nominee for Vice President in 2016. There was Pierre Le Corf, the French activist who put out videos to cover up the killing of thousands of civilians in Syria’s largest city Aleppo by the Assad regime and its Russian ally.

And now there are the YouTubers.

They are the tourists seeking clicks and profits from their journeys in regime-controlled territory: the UK’s Simon Wilson and Benjamin Rich, with 3.6 million followers on their “Bald and Bankrupt” channel; fellow Briton Jay Palfrey; Ireland’s Janet Newenham; Turkey’s Gökhan Yıldırım; and Azerbaijan’s Davud Akhundzada.

In a May video, Wilson and Rich stand in the Aleppo Citadel. They look out over neighborhoods destroyed by the regime but eagerly proclaim that they “felt zero danger here”. Their guide assures them that the area was destroyed by “militants” between 2012 and 2016 with “all kinds of weapons”.

Wilson does note the omnipresent image of Bashar al-Assad, including in restaurants and hotels. But he is told by his the guide, when he asks about “reconstruction”, “We want to make sure that the entire Syria is safe. We want to liberate the last parts of the northwest of Syria….We want to get all our territories back, and then we can talk about rebuilding.”

In fact, there has been little reconstruction of the eastern half of Aleppo, held by the opposition from 2012 to December 2016. The legacy of the destruction — every medical facility was damaged by Assad regime and Russian attack — and the siege, which culminated with the forced transfer of 50,000 residents, continue.

But reality must not stand in Wilson and Rich’s way: he uses the video to pitch subscriptions to Surfshark, a provider of virtual private networks and the sponsor of their trip.

Palfrey’s spotlight is on Homs, Syria’s third-largest city. The site of some of the largest protests in 2011 for rights and reforms, much of it was levelled from early 2012 by regime bombing. It would be a key point in the conflict: depleted and facing defeat on the ground, Assad’s forces would devastate civilian areas in cities and towns with airpower.

The Briton stands in a square in 2021 and says in a monotone, “I feel sick. Almost every building around me is destroyed by rockets. There are traces of airstrikes and gunfighting….This is the worst destruction I have ever seen in my life.”

He never mentions who is responsible for the large majority of that destruction or the displacements of “more than half” the population of the city.

Other vloggers do ascribe responsibility, but only to serve the regime’s distortions. Newenham says Homs was leveled by “airstrikes from people outside of Syria” — even though only the Assad regime and, later, its Russian backer had warplanes. Akhundzada says it is all because the opposition’s Free Syrian Army dared to resist the Assad assault: “As a result, this is what they have left.”

At points, the videos stretch the definition of oblivious. Newenham waxes lyrical about the Bab Tuma district in Damascus, close to the torture chambers of Assad’s Air Force Intelligence — an unwitting echo of Rania Khalek’s “breathtaking view” in 2019 of the Sednaya area, where many thousands of civilians have been executed or perished from inhumane conditions in a regime prison.

We never hear about the Syrian people. We just hear about war and how bad Bashar al-Assad is. I’m just trying to show my audience, which is 90% Western, what Syria is like, as they don’t know anything about it.

She never mentions that what she sees and hears is managed and closely overseen by the Assad regime, which provides the minders to ensure she stays on the proper course.

The Youtubers don't show us usually their local assistants in their visits, not only #Syria trips, but this Youtuber showed us her assistant many times. here we can see him before entering the #Aleppo citadel how he showed the soldiers his "mission card.
🖱️https://t.co/fc9NbD6vve pic.twitter.com/4OZLpukJdY

Content creators who visit Syria serve the interests of the regime, in one way or another. They convey only what the regime wants to export….

[This includes] promoting that life has gone back to normal in Syria, rather than conveying the lived reality of citizens there.

While some Western viewers may be taken in by the videos sugar-coating the regime, Syrians are not.

On a pro-regime Facebook page promoting Wilson and Rich, one respondent suggested that British outlets such as The Guardian “can give him information with photos and videos” about regime massacres of civilians.

Another advised, “Don’t do publicity, brother, because you’re a visitor. For us Syrians, there’s neither security nor safety, a country of mafias and corruption.”