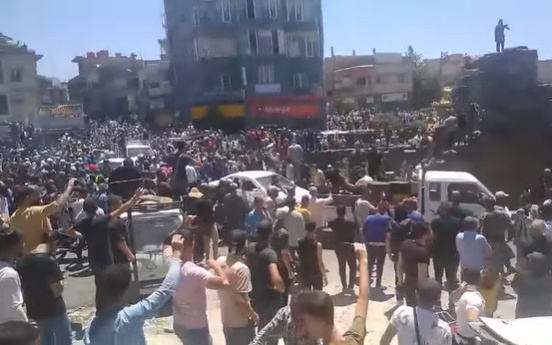 Residents in Suwayda in southern Syria celebrate after Druze groups overran the headquarters of a pro-Assad militia, July 2022

After their expulsion of a pro-Assad militia from its headquarters in Suwayda Province in southern Syria, local groups are asserting their authority by killing kidnapped militiamen.

Seven members of the Dawn Forces, supported by the Assad regime’s military security branch, were slain within a week. Their bodies were left in the center of Suwayda city.

Among the victims was Muhammad Abu Hamdan, one of the most prominent Dawn Force officials. The whereabouts of leader Raji Falhout after he fled the attack on his headquarters on July 27.

No one has claimed responsibility for the latest killings. However, one of the victims, Raed Kamaluddin, was in a July 27 video clip on the Facebook page of the “Anti-Terrorism Force”, apparently being interrogated.

The Dawn Forces had inflicted significant casualties on the Anti-Terrorism Force in mid-June, including the killing of the ATF leader.

On July 31, the Men of Dignity, a leading Druze faction, announced the release of six Dawn Forces militiamen captured in the attack four days earlier.

Laith al-Balous, the son of Men of Dignity’s late founder Walid al-Balous, said, “Uprooting the Raji Falhout gang means eradicating Iranian expansion in the region.” He did not claim the killings of other Dawn Forces members, but challenged those who criticized the slayings.

Men of Dignity media official Abu Taymour said operations continued against the Dawn Forces and other pro-Assad militia: “The Men of Dignity continue raids almost daily, based on the documents and records found at the headquarters and the confessions of prisoners….The movement has detained some wanted people and continues to search for others.”

The spokesman said there is a deadline for “the rest of the members of the gangs to surrender themselves and their weapons within a specific time. Some have responded and handed over weapons, documents and information.”

ORIGINAL ENTRY, JULY 29: The Assad regime is facing a challenge to its authority in southern Syria, with Druze groups in Suwayda Province seizing control of the headquarters of a pro-Assad militia.

The Druze Men of Dignity and other local armed factions overran the Dawn Forces, which is affiliated with regime military intelligence, on Wednesday.

Syria: today local fighters from Suwayda put an end to violations committed against civilian population by Assad's Military Intelligence. 100s of fighters stormed & took their HQ in Atil, in outskirts of Suwayda-city. Many casualties. Video of their HQ before it was burned down👇 pic.twitter.com/m9IrNTPZMv

The Druze groups accused the Dawn Forces of kidnappings and assassinations throughout the province.

The confrontation escalated last Saturday when the Dawn Forces kidnapped Jad Hussein al-Tawil, a man from Shahba city, accusing him of involvement in attempts to assassinate Falhout and of membership in an opposition military faction.

Negotiations appeared to ease the situation, but when the Dawn Forces seized more civilians from Shahba, armed factions stormed the headquarters to free the detainees.

Men of Dignity spokesman Abu Taymour said, “The province has seen a withdrawal of the role of the [pro-Assad] security branches and their headquarters.”

The regime and its media outlets have not mentioned the developments.

There have been periodic demonstrations against the regime in Suwayda, on the Jordanian border, since the Syrian uprising of March 2011. In 2015, the killing of prominent Druze leader Sheikh Walid al-Balous sparked protests. In June 2020, residents challenged the regime over political and economic conditions. In February, there were further protests over the economic situation, spurred by subsidy cuts.