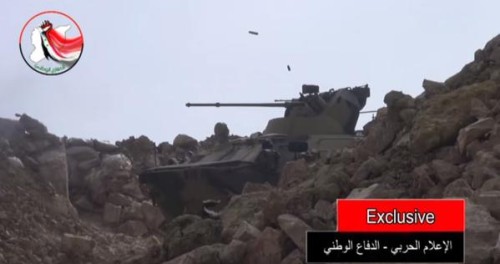 Op-Ed: Can the Last Person Out Please Turn Off the Lights?
Analysis: Challenging the Rumors of Russia’s Military Intervention…Again

RIA Novosti quoted a “diplomatic source in Athens”: “On Saturday, US embassy appealed to the Greek government with a request to prohibit the flights of Russian aircraft in the FIR Athens. The Greek government refused to do so, in order not to worsen relations with Russia.”

The source reportedly said that Moscow has requested and received Athens’ permission to conduct flights with humanitarian aid to Syria from September 1 to September 24.

UPDATE 1230 GMT: Syrian State media says a “Jabhat al-Nusra terrorist” has confessed to both bombings in Sweida Province on Friday that killed at least 38 people.

Citing the “Head of the Security Committee in Sweida”, State news agency SANA said “Abu Turaba” was arrested on Sunday. It claimed that Druze sheikhs listened to the suspect’s confessions.

State media initially said the suspect was a member of the Free Syrian Army, but later changed the story. Regime outlets have previously blamed bombings, later found to be set by Syrian security services, on “terrorists”.

SANA said the sheikhs explained that the confessions of Abu Turaba reveal the “terrorist and obscurantist mentality” trying to drive a wedge between Sweida’s people and the Assad regime.

Friday’s killings, including that of prominent Druze leader Sheikh Walid al-Balous, fed demonstrations that were already complaining about high prices and corruption.

SANA also accused Abu Turaba of involvement in the protests: “The terrorist also confessed to participation in the attacks on the military police and security branches… in addition to acts of vandalism and theft in Sweida.”

ORIGINAL ENTRY: Saturday was filled with rumors about Syria’s conflict, from Russian military intervention to a Druze uprising against the Assad regime.

International media devoted their headlines to new claims that Moscow was preparing to put troops on the ground in the 4 1/2-year conflict. Websites proclaimed the exposure of a “Russian Secret Army” mobilized alongside President Assad’s forces.

The stories were largely exaggeration and chatter — in one case about two soldiers who must be Russian because they were “tall, blonde, and blue-eyed” — with little new information beyond last month’s sightings of advanced military equipment from Moscow en route to Syria or, in one case, on the battlefield in Latakia Province in the west.

The claims were further complicated by the misleading dissemination of photographs “proving” the presence of Russian troops on the battlefield. In most cases, they were of Russian soldiers at long-standing naval bases in Latakia Province on the Mediterranean. In others, they were actually of Russian forces in locations like Kazakhstan. One photo claiming to be of Russian soldiers in Homs in summer featured snow on the ground.

A Syrian “military source” said 40 Russian Marines arrived in Tartous and were deployed in the provincial cities of Slunfeh and Jableh and further east in Homs Province to train President Assad’s militia.

One valuable addition, amid the misinformation, was apparent confirmation that Russian advisors have been directing Assad forces on fortifications:

Meanwhile, lost in the media rush was the possible explanation for the surge in the “Russians are Coming” stories. Analyst Yuri Barmin asked and answered an interesting question:

Why is it so big in the news today all of a sudden? Somebody wants Saudis & Emiratis to think that Putin's ramping up presence in Syria.

Russia has been assessing its options after the collapse of its “peace initiative” last month, ruined when the Saudi Foreign Minister — in front of Russian counterpart Sergei Lavrov in Moscow — declared that no high-level talks could begin before President Assad left power.

Moscow faces the dilemma of either stepping back from an Assad who is in political and military trouble, or of redoubling their investment in his survival. The feeding of rumors of their stepped-up intervention — even as President Vladimir Putin and Kremlin officials deny that is occurring — puts out a posture of strength as Moscow buys times to figure out how to deal with weakness.

If that is the case, the strategy appears to have had some success. On Saturday, US Secretary of State John Kerry called Lavrov to express his concerns about the reports of “an imminent enhanced Russian military buildup”. The State Department said in a statement:

The secretary made clear that if such reports were accurate, these actions could further escalate the conflict, lead to greater loss of innocent life, increase refugee flows and risk confrontation with the anti-ISIL coalition operating in Syria.

Some activists were paying closer attention to events in Sweida Province in southeast Syria, following Friday’s bombs that killed the prominent Druze Sheikh Walid al-Balous, another Druze cleric, and at least 24 other people.

Claims circulated on social media of a surge in “anti-regime protests”, but the evidence was sketchy at best. Videos claiming to show the demonstrations were often from earlier last week, when residents had complained about high prices and corruption. Other assertions that “all governmental institutions [came] under protesters control and that Alawite officers left [Suwaida] city” could not be verified.

Meanwhile, a document purporting to be of pro-Balous Druze declaring “self-rule and abolition of regime security apparatus in Swaida” was published, but without a clear indication of its source: 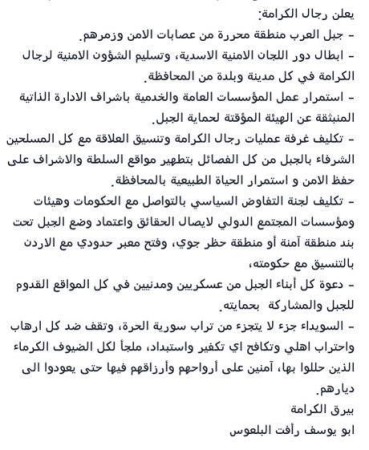 A Syrian police commander denied that six security personnel had been killed by protesters.

Receiving the newly-appointing Ambassador from Hungary — highlighted this week for refusing further movement to refugees — Rouhani said, “I am glad that some European countries have taken a positive stance on helping refugees out of their harrowing situation. I hope all countries in Europe and other parts of the world soon join this trend and compensate for the shortcomings.”

The President did not comment on how many refugees Iran has taken or whether Iranian support of the Assad regime may have contributed to the crisis of displaced Syrians.

A 10-minute PR video from the rebel faction Ahrar al-Sham about reconstruction projects and life in opposition-held areas in and near Aleppo city: