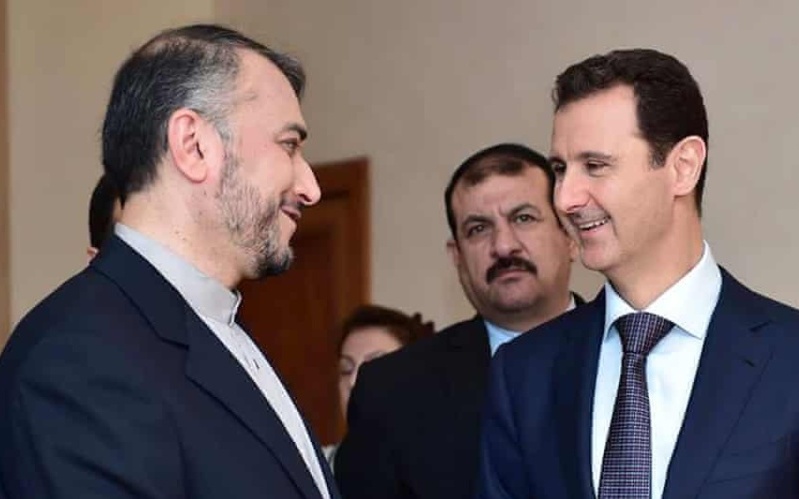 Amid stalled Iran nuclear talks, Israeli attacks inside Syria, and the realignment of Russian forces because of Moscow’s invasion of Ukraine, Iranian Foreign Minister Hossein Amir-Abdollahian has visited Bashar al-Assad in Damascus.

No details were given in the Assad regime’s statement on the talks. It stuck to template declarations such as Assad’s description of a Syrian-Iranian “alliance of the will” versus the West. The Iranian Foreign Ministry used the quote, “We are happy that in such conditions, the Islamic Republic of Iran is part of the political solution in the region.”

Abdollahian cited “issues of common interest” and said Assad’s visit to Tehran in May “marked a major turning point” with “profound consequences for the relations between the two countries”.

Abollahian also referred to Israel’s regular airstrikes inside Syria on regime and Iranian positions as part of a “terrorist war”.

The most significant signal in the statement was the denunciations by both sides of Turkey’s “threats to launch a new aggression against Syria”, with Turkish President Recep Tayyip Erdoğan saying Ankara might launch further cross-border military operations against Kurdish areas in north and northeast Syria.

Iran has propped up the Assad regime with billions of dollars in assistance, as well as military intervention, since the Syrian uprising of March 2011. However, Tehran has curtailed the aid because of its economic situation.

Amir-Abdollahian’s visit came three days after the failure of indirect US-Iran talks in Qatar to resolve issues over the 2015 nuclear deal between Tehran and the 5+1 Powers (US, UK, France, Germany, China, and Russia).

With the stalled discussions and no immediate prospect of the lifting of US sanctions, the Iranian currency has sunk to an all-time low amid nationwide protests over wages, pensions, working conditions, and prices.

See also No Progress in Iran Nuclear Talks In Qatar

Meanwhile, Russia has had to pull forces from Syria because of the high cost, in troops and materiel, of Vladimir Putin’s invasion of Ukraine. Unconfirmed claims say Iran has taken over some of the military positions.

But Israel is hindering the Iranian military with the airstrikes against bases, warehouses, and even Damascus International Airport. The attacks seek to prevent Iran’s transfer of weapons and missiles to its ally Hezbollah, as well as curbing Iranian capabilities.