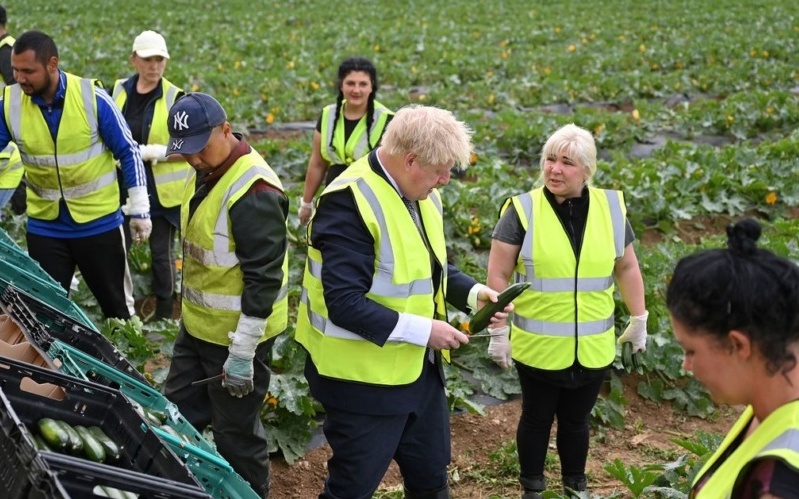 Almost six years after the Brexit referendum, a negligent and corrupted UK Government, desperately clinging to power, breaks international law not once but twice in a single day.

Wanting to become Prime Minister, Foreign Secretary Liz Truss presents a bill to set aside the Northern Ireland Protocol in the Brexit agreement, ripping up a treaty and threatening security on the Irish island as well as relations with the European Union.

Wanting to become Prime Minister, Home Secretary Priti Patel proudly announces that 37 asylum seekers — having risked their lives to cross the English Channel in small boats — will be deported from the UK to Rwanda, a country criticized for human rights violations.

Wanting to remain Prime Minister, battered by a vote of confidence within his Conservative Party, having already broken the law with Coronavirus parties, Boris Johnson does a photo opportunity in Cornwall, looking at vegetables. He is interviewed by London’s LBC Radio — but no one can hear him because the mobile connection is so poor.

Breaking the Law Over Northern Ireland

The Government’s Northern Ireland punch has been telegraphed for month, indeed ever since Johnson lied in campaign for the December 2019 General Election that there was no customs line down the Irish Sea.

The following September, three months before the Brexit Agreement took effect, Northern Ireland Secretary Brandon Lewis announced that the line would disappear with the Internal Markets Bill. The Government had to retreat in the face of criticism in the UK as well as from Europe and the US, with Lewis admitting the attempt to break international law.

But in 2022, there is an added urgency to the scrapping of the Protocol. The economic damage from Brexit, compounded by the circumstances around Russia’s invasion of Ukraine, can no longer be obscured. In April, the UK economy contracted by 0.3%, portending the recession predicted by analysts — derided by Michael Gove’s “The people have had enough of experts” — if Britain left the European Union. The UK’s projected growth rate for 2023 — 0% — is the lowest among all 38 members of the Organization for Economic Cooperation and Development, except for Russia.

The Government’s Northern Irish ally, the Democratic Unionist Party, had slipped in May’s elections and thus from power. Its petulant refusal to take up seats in the Northern Irish Assembly added more pretext for Johnson and Truss to act.

The June 6 vote of confidence in Johnson, with 41% of Conservative MPs opposing him, confirmed the timing. Having frozen discussions with the EU’s Maroš Šefčovič since February, Truss would table the bill. The European suggestions for a revision of the customs arrangements — following its offer to cut paperwork for food and manufactured good by at least 50%, following the grace periods before implementation was completed — would be buried. Instead, the EU would be the whipping boy, particularly with the unilateral removal of the European Court of Justice as an arbiter of disputes.

In practical terms, the Bill is a cover-up rather than a solution. Its talk of “red channels” and “green channels” for goods between Great Britain and Northern Ireland does not remedy the failure of London to put in satisfactory customs machinery and procedures. Indeed, with no details on how a system will monitor goods to ensure that they do not break the terms of the “green channel”, the legislation tries to bury this failure.

Perhaps more importantly, Truss’s proclamation that the Bill is necessary to protect a “single market” is Orwellian. If the Johnson Government truly wanted a single market while preserving stability across Ireland and the North, it could simply join the EU version which is already in place.

But that is anathema to the right wing of the Conservative Party, which has an effective veto over Johnson’s future. And so the political ruse of the Government, making international law disposable, must continue.

Breaking the Law Over Asylum Seekers

The Rwanda scheme, with its manipulation of xenophobia and race, is even more pernicious.

Home Secretary Patel, whose chutzpah is almost as great as her ambition, had proposed that the asylum seekers be sent all the way to Ascension Island in the South Pacific. When this trial balloon was shot down, she put out Madagascar, another proposal nixed as impractical by Home Office staff.

And so she settled on Rwanda, a country with a suspect record on human rights but a willingness to take the £130 million carrot dangled before it.

The deportations are a flagrant violation of the 1951 UN Refugee Convention, with its core principle of “non-refoulement”: a refugee should not be returned to a country where they face serious threats to their life or freedom. They also rip up the principle that an asylum seeker should have a right to a judicial hearing in the country where he or she arrives.

After the Government issued a misleading claim of UN support, the UN’s refugee agency pointed told a British court of the violation of international law. The UK’s Law Society set out the objections, prompting Johnson to attack “legal professionals who are simply doing their jobs”.

Even though UK courts refused to issue a general injunction against the first deportation flight, scheduled for last Tuesday, decisions on individual cases whittled the passenger list from 37 to just 7. Then the last-minute ruling of the European Court of Human Rights protected the other seven, grounding the Boeing 767 as it was about to take off.

A Government That Wins by Losing

The bill scrapping the Northern Ireland Protocol is likely to face stiff, protracted opposition in the House of Lords, as well as legal challenges by the EU and opprobrium from Washington, with the reminder that this will doom any prospect of a US-UK trade deal. The deportations to Rwanda are unlikely to be attempted again before July, when a full UK judicial review is expected.

But these are not defeats for the Johnson Government.

For the Government’s chief objective is not the “achievement” of either a suspended Protocol or the removal of troublesome asylum seekers. Instead, its aspiration is to triumph through the politics of failure, staying in office as the victim of malevolent forces at home and abroad.

The EU will once again be framed as the bully over the Protocol. “Remainiacs” and even a “Remainers’ Brexit” will be invoked. The European Court of Human Rights will be castigated as the deniers of Britons’ freedoms.

A wonderfully funny video, created by @SirPatStew and @guardian which 1) explains the ECHR, 2) explains its British origins after WW2 victory and 3) explains ECHR importance to Good Friday Agreement pic.twitter.com/KsdX61Ez6j

If UK judges rule against the Rwanda scheme, they will again be “enemies of the people”, just as they were in November 2016 when they raised legal issues about the Brexit process.

The Government is counting on its media minions to hail its martyrdom in the face of these nasty foes. And it is relying on the BBC’s corrosive balance between fact and spin, as in this headline report on Wednesday.

This [Rwanda] episode will embolden politicians who will want Britain to re-examine its relationship with international human rights law in general, and the European court in particular.

Never mind those in Northern Ireland who will lose. To hell and Rwanda with the lost asylum seekers. Even the loss of a functional, let alone decent and legal, UK system is acceptable.

For Johnson, Truss, and Patel, all that matters is winning by losing, gripping their rusted thrones of a crumbling, corroded power.