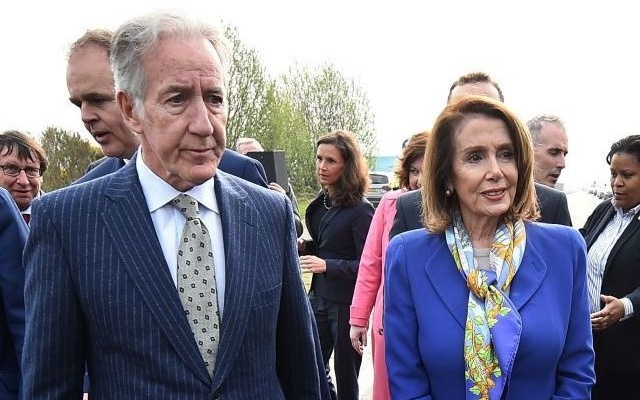 US House Speaker Nancy Pelosi and Rep. Richard Neal, chair of the House Ways and Means Committee, cross the border from Northern Ireland into County Donegal in the Republic of Ireland, April 2019 (Niall Carson/PA Wire)

Nancy Pelosi, the Speaker of the US House of Representatives, has led a volley of warnings by senior American politicians to the UK Government: Do not undo the Brexit withdrawal agreement you signed with the European Union.

The Good Friday Agreement is the bedrock of peace in Northern Ireland. If the U.K. violates its international agreements & Brexit undermines the Good Friday accord, there will be absolutely no chance of a U.S.-U.K. trade agreement passing the Congress. https://t.co/n7E4GHTJcI

Pelosi’s blunt statement has put extra pressure on UK Prime Minister Boris Johnson as he moves to introduce a new internal market bill that would override arrangements agreed on how the border between Ireland and Northern Ireland will operate after Brexit. Those elements are designed to ensure an open border between the two sides.

Why is the American opposition significant? The British government has made much of its post-Brexit aim to strike a trade deal with the US, but any such deal must be ratified by Congress, which is currently in Democrat hands and likely to remain so. While the President of the US can negotiate trade deals, they must be signed off by the Senate and House.

Why have Pelosi and several other senior American politicians been so outspoken on this? The manifest answer is to protect the Good Friday Agreement. However, there are other motivations underlying this opposition.

US Support for the Good Friday Agreement

Pelosi says “The Good Friday Agreement is treasured by the American people and will be proudly defended in the United States Congress.”

While we should not overestimate the American people’s understanding of international affairs, there is some truth in this statement. In the US, the making of peace in Ireland is broadly perceived as a historic international settlement in which America played a significant role.

In Washington, there has long been a bipartisan consensus about supporting the peace process in Northern Ireland. Successive administrations have lent diplomatic and economic support, beginning with President Jimmy Carter in the mid-1970s. While there has been more notable involvement by Democrat-led administrations, Republicans have also invested.

The diplomatic high point of that involvement was the role played by President Bill Clinton and his administration in brokering the Good Friday Agreement in 1998. This ended almost 30 years of violent conflict and established a devolved government in which unionists and nationalists share power.

Less remarked upon is the support of the “peace dividend” by President George W. Bush’s administration in the crucial years following the agreement. Richard Haass, appointed envoy by Bush, was active in advancing the decommissioning of arms in this period and would later return to Northern Ireland to chair inter-party talks on unresolved issues from the peace process.

US interest and investment in Northern Ireland has waned somewhat in recent years and the Trump Administration has shown little interest. So there was surprise when, in March 2020, Donald Trump’s former chief of staff, Mick Mulvaney, was appointed US special envoy to Northern Ireland. Mulvaney has stated his commitment to “getting economic opportunities” in the province.

While Trump’s support for a hard Brexit and his general disdain for liberal internationalism signals little concern for the peace process, this is not the majority view in Washington. Last October a resolution was introduced in the US House of Representatives reaffirming support for the Good Friday Agreement. It was co-sponsored by Democratic congressman Thomas Suozzi and Republican congressman Peter King. In November 2019, the House voted in favor of the resolution, passing it by a unanimous voice vote.

Such bipartisan and fulsome American support for the Good Friday Agreement provides significant political capital for those now opposing the UK’s new bill.

While American support for the Good Friday Agreement is broadly bipartisan, there is also much politicking underlying Pelosi’s remarks. They reflect not only a commitment to protecting the agreement but also the complex interactions of political and diplomatic actors activated by Brexit on both sides of the Atlantic.

In this activation, Ireland’s influence in Washington has been significant, though often missed by British observers. Ireland’s soft power in the US draws on the appeal of an ethnic identity that almost 35 million Americans claimed in the last national census. It has close ties to the Irish American leadership at the heart of American politics and to the Irish American lobby in Washington.

That Irish American leadership includes Congressman Richard Neal, a long time spokesman for Irish interests. He chairs the influential Ways and Means Committee in Congress, which will oversee any post-Brexit trade deal between the US and the UK. He, too, has recently restated his view that “any US-UK trade agreement must preserve the Good Friday Agreement”.

As leading Democrats heading towards an election, there can be little doubt that Pelosi and Neal’s robust opposition to the UK’s new bill goes beyond a sincere and principled defense of the Good Friday Agreement to oppose Trump’s support of Brexit and underline Democrat control of the House.

And so the British politicians and diplomats trying to negotiate a new trade deal with the Trump Administration have been increasingly frustrated by the powerful and consistent pushback from the Democratic leadership in Washington.

If Joe Biden wins the Presidency, that pushback may get even stronger. His foreign policy advisor Anthony Blinken tweeted this week:

@joebiden is committed to preserving the hard-earned peace & stability in Northern Ireland. As the UK and EU work out their relationship, any arrangements must protect the Good Friday Agreement and prevent the return of a hard border. via @NYTimes https://t.co/KUIScLLqt0

Biden would come to power as an avowed internationalist and supporter of the EU. He would also be the 23rd US President of Irish heritage.