UPDATE: Pro-Assad Forces Start 2022 with Killing of 2 Children and a Woman in NW Syria 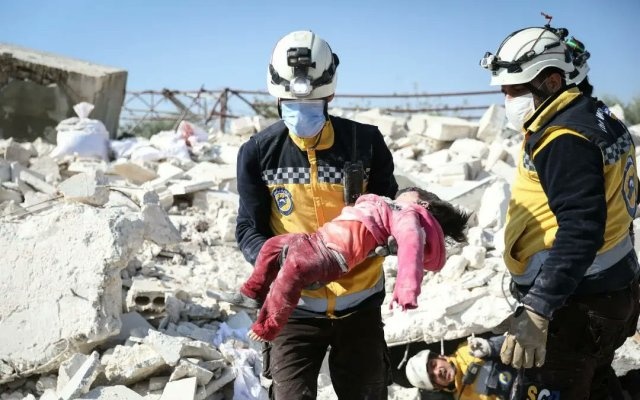 A White Helmets rescuer carries the body of a young victim of Assad regime shelling of northern Idlib Province, November 11, 2021

Senior UN official Marks Cutts confirmed that the water station was “badly damaged”, worsening the situation of about 3 million people — many of them displaced from others parts of Syria — in Idlib Province.

Syria: this is the moment Russia blew up the water station feeding Idlib-city this morning. pic.twitter.com/WBLOCQq5B2

Among the effects of the destruction in the “Al-Arshani” water pumping station, west of Idlib city, which is one of the stations feeding the city, was subjected to direct Russian air strikes today, Sunday, January 2, which led to great destruction and its now out of service. 🧵 pic.twitter.com/9ygAIRMxBt

Abu Hazem Idlibi, an official in the opposition administration, summarized, “The Russians are focusing on infrastructure and economic assets. This is to add to the suffering of people.”

The Syrian pro-Assad outlet Al-Watan covers up the strikes on civilians with the claim, “The Russian Air Force has intensified its raids on the areas of deployment of the Turkish regime’s terrorists in the ‘de-escalation’ area in Idlib and its vicinity, which suggests that Moscow will adopt the same policy of applying military pressure to achieve a political breakthrough.”

An Australian resident posts a message of “reality” and “resilience” from Idlib city:

After a crazy three days of airstrikes, I wanted to share this IMPORTANT message with you guys… pic.twitter.com/zKnc4zULY6

ORIGINAL ENTRY, JAN 2: Pro-Assad forces begin 2022 with the killing of two children and a woman in opposition-held Idlib Province in northwest Syria.

Ten other civilians, including six children, were wounded in the bombing of temporary housing near Jisr al-Shughour just after midnight on New Year’s Day.

Heartbreaking displays show #WhiteHelmets teams retrieving a dead body of a little child who was killed along with another child and a woman after Russian warplanes devastated their shelter while they were sleeping after midnight near #Jisr_Shuoghur west #Idlib. pic.twitter.com/jqaSGFs6SI

In March 2020, Turkish President Recep Tayyip Erdoğan and Russian counterpart Vladimir Putin agreed a ceasefire. The accord ended an 11-month Russian-regime offensive which seized parts of Idlib Province, as well as all of neighboring northern Hama Province.

However, pro-Assad forces did not pause recurrent shelling, and Russia periodically bombed Idlib and Aleppo Provinces. Almost half of medical facilities were knocked out of service, and infrastructure such as fuel, electricity, water, and border crossings have been targeted.

The attacks escalated at the end of 2021, with pro-opposition activists claiming that Russia is trying to damage food supplies by hitting targets such as poultry farms.

The UN estimates that about 4 million people, many of them displaced by pro-Assad assaults on other parts of Syria, live in the area. About 1.6 million are in camps or informal settlements, and 75% of the population depends on humanitarian aid for basic needs.