UPDATES: Biden to Putin — US and Allies Will “Respond Decisively” Over Russia Attack on Ukraine 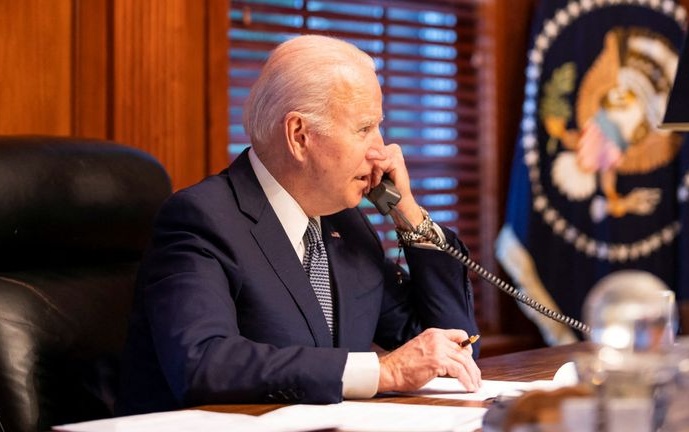 Speaking by phone with Ukraine President Volodymyr Zelenskiy, Joe Biden repeats his pledge of support to Kyiv if Russia attacks the country.

Biden, repeating the words he used in a call with Russian leader Vladimir Putin last Thursday, said the US and its allies will “respond decisively” if Moscow’s massed troops cross the border into eastern Ukraine.

The first international talk of the year with @POTUS proves the special nature of our relations. Joint actions of 🇺🇦, 🇺🇸 and partners in keeping peace in Europe, preventing further escalation, reforms, deoligarchization were discussed. We appreciate the unwavering support of 🇺🇦.

A White House official said Biden intends to reaffirm US support for Ukraine’s sovereignty and territorial integrity, discuss Russia’s military build-up on Ukraine’s borders, and review preparations for upcoming diplomatic engagements to help de-escalate the situation in the region”.

Zelenskiy spoke with US Secretary of State Antony Blinken ahead of Biden’s call with Russian leader Vladimir Putin on Thursday.

Speaking after a New Year’s Eve lunch in Wilmington, Delaware, Biden said he made it clear to Putin that the US and its allies will respond firmly to a Russian attack on Ukraine:

We made it clear to President Putin that if he makes any more moves, goes into Ukraine, we will have severe sanctions. We will increase our presence in Europe with our NATO allies, and it’ll just be a heavy price to pay for it.

It’s worth noting that the 🇷🇺 spin after the Putin call with Biden 🇺🇸 focuses primarily on what might happen after a 🇷🇺 further invasion of 🇺🇦. It sounds as if military action will happen and they believe they can avoid severe sanctions by counter-threats. https://t.co/qUiYqO2a1r

Trying to cover its years-long attempt to destabilize Ukraine — taking part of its territory and separating it from other European countries and the US — the Kremlin promoted the 50-minute call as an attempt to ensure “security guarantees” for Russia. Putin declared that any economic sanctions, in response to Russian military operations, would mean a “total severance of relations”.

The call was the second between the two men this month, following Russia’s deployment of about 100,000 military personnel on the border with eastern Ukraine.

The two sides will meet in Geneva on January 10, followed later in the week by Russian discussions with NATO, European countries, and Ukraine.

Putin again tried the line that it is the US and NATO which have placed offensive weapons near Russia’s borders — rather than Russia using offensive weapons to annex Crimea, down a Malaysian passenger jet killing almost 300 people, and support separatists in eastern Ukraine since the pro-Russian Ukrainian leader Viktor Yanukovych was toppled by mass protests in 2014.

But he appeared to shift from reference to the US supply of anti-tank weapons and small munitions to Ukraine, referring instead to nuclear and non-nuclear “global strike” weapons, including intermediate-range nuclear missiles.

US officials said that gave them an opportunity in the talks with the Russians, since the “global strike” arms are prohibited by a treaty — violated by Moscow for years — and since there are no plans for a new generation of such weapons on European territory.

Yuri Ushakov, Putin’s foreign policy adviser, said after the call that Putin had emphasized the expectation of negotiations producing “legally formulated guarantees of security”. He said the talk fostered a “positive background” for the January discussions, although there had been no compromises.

Ushakov added that Putin warned against new sanctions on Moscow: “In this situation, it’s better not to make such mistakes.”

Senior Administration officials said the call “set the sort of tone and tenor for the diplomatic engagements”. He avoided detail as, unlike Russia, the US did not want to “get into the territory of starting to negotiate in public”.

President Biden laid out two aspects of the U.S. approach that will really depend on Russia’s actions in the period ahead.

One is a path of diplomacy leading toward a declaration of the situation and the other is a path that is more focused on deterrence, including serious costs and consequences should Russia choose to proceed with a further invasion of Ukraine.