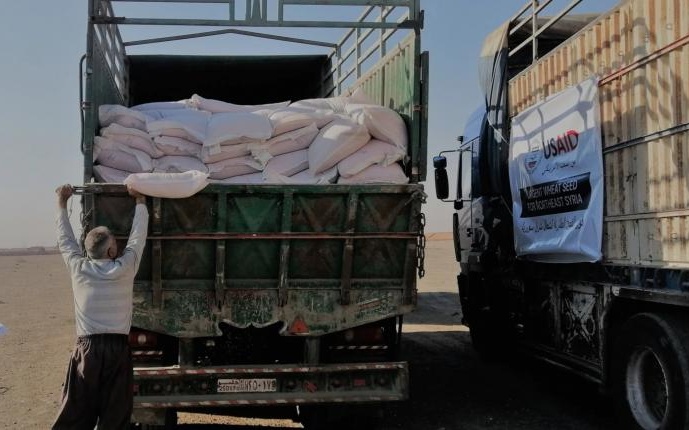 Wheat seeds from the US Agency for International Development are delivered to northeast Syria, November 19,, 2021

Fearing a resurgence in wheat production in Kurdish-controlled northeast Syria — in contrast to shortages in regime-held areas of the country — Assad officials are waging a propaganda campaign over US assistance.

Wheat output across Syria has been sharply reduced by the 129-month conflict, destruction of crops, and drought. The regime has been unable to fill tenders for imports, leading to reduced rations of subsidized bread at a lower quality. In the opposition-held area of northwest Syria, a falling Turkish lira — used widely as the local currency — is leading to higher prices and smaller rations. And in the northeast, cultivation has been curbed by cutoffs of water, which Kurdish authorities blame on Turkey.

The UN reported this week that 90% of the Syrian population is living below the poverty line. Food prices rose to a record high for the second month in a row, following a 247% increase in the cost of bread in 2020.

The World Food Programme is trying to mitigate the situation with assistance to about 5.4 million people, but 12.4 million — about 2/3 of the population still in Syria — are food insecure and 1.3 million severely food insecure.

UPDATED Syria: “Half of My Day is Spent Waiting for Bread”

In mid-November, the US Agency for International Development donated 3,000 tons of wheat seeds to the Kurdish-controlled northeast to address shortage amid drought. The seeds originated from farmers in Iraqi Kurdistan, with USAID saying they were only delivered after testing to ensure “high standards for safety and quality”.

To combat an anticipated wheat shortage this planting season in NE #Syria, @USAID is sending 3K metric tons of quality wheat seeds from Iraq to Syrian farmers. 2021’s wheat harvest was one of the poorest on record; these quality seeds will help prevent a food security crisis. pic.twitter.com/jF2g10XZ4O

Unsettled by the announcement, the Assad regime quickly responded. The head of the regime’s Agricultural Director for the northeast declared, with no evidence for the assertion, that the seeds “contain a high rate of nematodes [plant-parasitic worms], which reached 40%”.

USAID is supplying Adana and Cihan wheat seed varieties to Syrian farmers, which are sourced from the region and undergo a series of tests at a qualified lab in the Kurdish Region of Iraq to verify their quality before they are transported and distributed to farmers in northeast Syria….

Seeds are tested for purity, germination rate, smut, presence of barley, insects, Cephalonia, nematodes, and to ensure they are effectively treated with fungicide.

John Saleh, a Washington-based Syrian affairs analyst, summarized Damascus’s disinformation tactics: “The Assad regime, along with its main backer Russia, don’t want to see development in the Kurdish region, especially if it is supported by the US.”

He noted that the regime, seeking economic weakness in the area so it can eventually take over, “spread these types of absurd rumors to create fear and panic among farmers who are in desperate need for help during these tough economic times”.

For years, Assad outlets and Russia hav pushed unsupported claims that US forces and their allies are burning wheat fields in regime-held areas.

In fact, the destruction of crops in Syria’s conflict has largely come from Russian and regime bombing, bolstering sieges and attacks on opposition territory in the northwest and near Damascus.