UPDATED Syria: “Half of My Day is Spent Waiting for Bread” 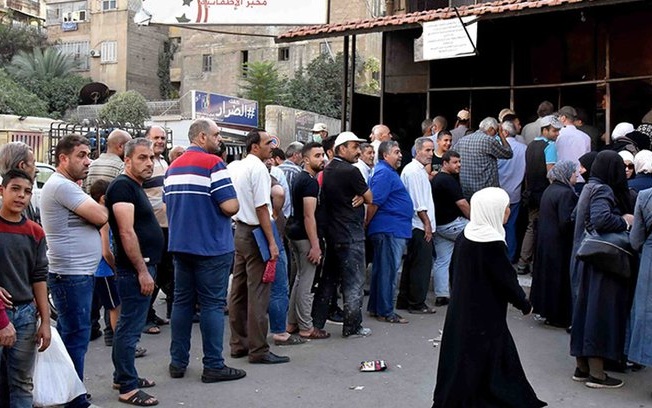 A worker at a regional council in Damascus Province describes waiting for more than two hours for subsidized bread at a State bakery: “I feel an internal struggle. I think about how I can survive on this small salary. Sometimes tears come streaming down my eyes without me noticing.”

He thinks of protesting, “I feel helpless, and I start to think, I have to do something. I have to act. Enough with this endless humiliation.”

But then he recalls the thousands of pictures of detainees — brought out by a defecting military photographer “Caesar” in 2014 — executed, tortured to death, or perishing from poor conditions in regime prisons: “The moment I start thinking [about revolting], the images of Caesar appear before me….They would arrest me, maybe even take my wife and rape and torture her in front of me.”

He adds, “People are not crazy, but they talk to themselves in line. Better than speaking up and ending up tortured in detention.”

Tsurkov notes the 247% increase in the bread price in 2020, with 83% of Syrians already living below the poverty line, and the Assad regime unable to provide even reduced quotas.

Maryam, a displaced student living in a Damascus suburb, explains,

I haven’t been able to obtain bread for about a week….I wait in line for four or five hours and return empty-handed….Every day there are fights in line because of the overcrowding.

Sarah Dadouch of The Washington Post adds first-person detail to the ongoing struggle of Syrians to obtain bread and other essential items in regime-held parts of Syria.

Abu Mohammed tells Dadouch of how he and his two eldest sons take turns lining up at the bakery after dawn prayers in Damascus.

The factory worker and father of five explains that they risk missing work or school: “One day I stood for seven hours. The next day it was eight, then six. I saw that my work was being hit. I need to work. I need to live.”

Even if bread rations can be obtained, the cost is rising: subsidized prices have doubled since October.

A resident of Tartous in western Syria says, “The poor man living in the village no longer has gas; he has wood. He’s out of bread; he makes his own.”

The Assad regime has been unable to fill tenders for imported wheat, and the shortages have been exacerbated by the disappearance of 500 tons of wheat as it was offloaded from a ship.

But Agriculture Minister Hassan Qatana tried to play down the crisis: “Let’s go back to baking bread in our houses instead of waiting on the government.”

He did not explain how households would bake without the flour made from wheat.

Standing in a field and holding a bouquet of wheat, Tabbaa said, “You are now seeing the importance of the wheat grain when you stand in line for the bakeries, when you wake up to eat breakfast, when you return home from school.”

The Tartous resident scoffs that ministers “sit there ridiculing the people and think everything is A-OK.”

ORIGINAL ENTRY, DEC 8: Writing for US National Public Radio, Louise Loveluck and Nada Homsi add first-person detail to the story of shortages and economic crisis in regime-held parts of Syria, including the capital Damascus.

Abu Alaa, a minivan driver, explains that he leaves his Damascus home at dawn to go to the bakery, standing in line for six hours for his subsidized ration of two packets of flat pita bread for a family of five.

He then goes to the gas station and waits a further six hours for petrol.

The Assad regime is struggling to provide wheat. Domestic production has fallen, amid Syria’s 117-month conflict, has fallen from 4 million to 1.2 million tons. Tenders for imports of basics such as wheat, sugar, and rice unfilled.

The situation has been compounded by a ban by the Kurdish autonomous administration, which controls much of northeast Syria and the bulk of the country’s wheat production, on sales to other areas.

The World Food Program says about 9.3 million people, about 60% of Syria’s remaining population, are food insecure.

But in September, the regime cut daily rations of subsidized bread for families of less than seven people. The cost was doubled, and the weight of a pack was reduced by about 15% . The price on the black market of an eight-loaf packet of subsidized bread is 10 times that of the subsidized equivalent.

In late October, a photograph showed people in Damascus waiting in iron cages for bread. After the image went viral, Syrian officials removed the cages, saying they were meant to “regulate” different groups as “the queuing culture does not exist in Syria”.

The Syrian pound, beset by the Lebanese banking crisis as well as corruption and internal issues, has plummeted on the black market from about 500:1 v. the US dollar last autumn to about 3,000:1. A State employee’s monthly salary is now as low as $20, composed to about $400 in March 2011. The cost of a WFP food basket, including essentials like rice and oil, has risen 247% since October 2019.

In Homs, a woman says, “We’re either fighting with the bakeries or with distribution centers. People are killing each other over just bread.”

She explains that the ration is not enough for her family, with three children, so they sometimes go hungry. The prices of other foods are now beyond reach: two pounds of lamb cost 18,000 Syrian pounds, almost half her husband’s monthly salary as a State employee.

“This is not just us,” she says. “This is all families in Syria.”