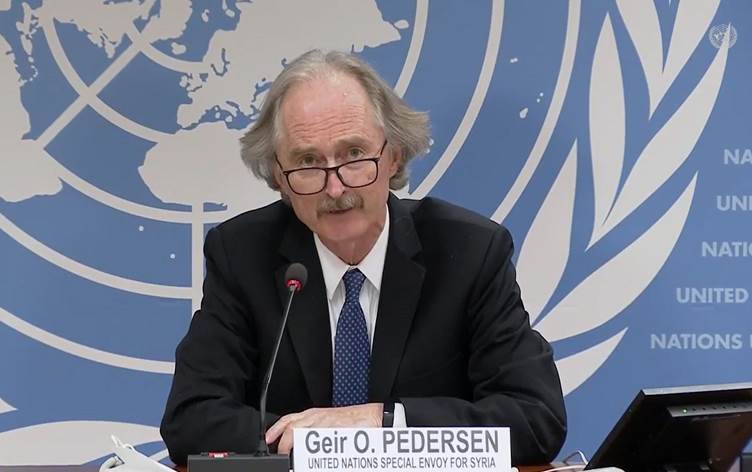 The UN envoy on Syria, Geir Pedersen (pictured), has finally blamed the Assad regime for the failure of Constitutional talks.

Since the first meeting of the Constitutional Committee two years ago, Pedersen has avoided criticism of the regime’s delay and stonewalling over any progress in discussions.

The envoy finally expressed his frustration after the regime delegation refused to engage over draft texts at last week’s meeting in Geneva, the first in nine months.

“The delegation nominated by the government stated that it had no revisions to present of its draft constitutional texts and that it did not see any common ground,” Pedersen said.

However, with the regime’s rejection of negotiations, the 45-member drafting committee was “not able to move from submitting and discussing initial draft constitutional texts to developing a productive textual drafting process”.

Pedersen said that he still believes “progress on the constitutional committee could, if done the right way, help to build some trust and confidence”. However, he continued, “Let me stress that this requires real determination and the political will to try to build some common ground.”

ORIGINAL ENTRY, OCT 23: The UN envoy on Syria, Geir Pedersen, said on Friday that renewed talks of the Constitutional Committee had been a “big disappointment”.

This week the 45-member drafting committee — 15 each from the Assad regime, the opposition, and civil society groups — gathered in Geneva, Switzerland for the first time in eight months.

Announcing the talks last Sunday, Pedersen was optimistic about negotiations over “a consensus on how we are going to move forward”.

See also EA on TRT World: Can A Constitution Bring Change to Syria?

But yesterday the envoy told reporters, “I think it is fair to say that the discussion today was a big disappointment. We did not manage to achieve what we had hoped to achieve, that we would have a good discussion on how to reach forward for some kind of a consensus.”

Without casting blame, Pedersen indicated that the Assad regime had hindered discussions. He noted that the opposition had presented a draft text on “The Army, Armed Forces, Security, and the Intelligence [Services]”. The civil society delegation offered its text on “Rule of Law”. But the regime delegation failed to produce its text on “Terrorism and Extremism”.

The envoy said three days of talks went rather well with “good discussions on the different principles that were presented”. But “one day…was more difficult”, and Friday’s negotiations on a provisional agreement — or “maybe on part of it, or a whole principle or if not agreeing on what we disagree on” — had broken down.

“No Change in Regime Behavior”

Hadi al-Bahra, the co-chair from the opposition, echoed Pedersen: “There were not even attempts to achieve a consensus.”

Bahra noted that the current constitution “legitimises the dictatorship and the monopoly”.

Without explaining why the regime had failed to present a text, Ahmad Kuzbari insisted that the delegation had done “everything in its power to make this round a success”. He asserted, “We listened to all proposals made by some of the participants which unfortunately some of which were far from reality and even reflected malign thoughts and aggressive agendas,” and snapped, “The opposition factions were attempting to legitimise the Turkish and US occupation of Syrian territory”.

A “Western diplomat” observed, “So far I haven’t seen any sign in the behavior of the regime vis-a-vis its population that might make us believe that there is something new which has been decided.”

Pedersen spoke afterwards with the two co-chairs, from the opposition and the regime, and said, “We agreed that it could not continue like this, and that we needed to develop a proper understanding on how we can move this into a proper substantial drafting process”.