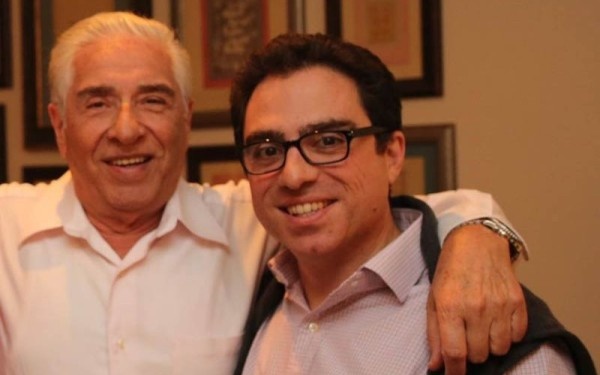 Siamak Namazi (R) and his father Baqer before their 10-year sentences in Evin Prison in Tehran, Iran in 2016

Namazi, a former UNICEF staffer and Iranian-American citizen, underwent the operation to clear a blockage in an artery to his brain, his lawyer Jared Genser said on Tuesday.

Today, Baquer Namazi was forced to undergo surgery in Iran to clear life-threatening blockage in the arteries to his brain. Though I celebrate the surgery's success, I continue to call on Iran to allow Baquer travel abroad, where he can recover safely. https://t.co/QcRrLywW0d

Genser said Namazi was expected to remain in the intensive care unit for another 48 hours and then be transferred to a general recovery ward.

ORIGINAL ENTRY, OCT 6: Lawyers have appealed to Iran to free former political prisoner Baquer Namazi, an 84 year-old Iranian-American national, so he can have surgery for an arterial blockage.

Namazi was seized in February 2016 when he visited Evin Prison to enquire about his son Siamak, an Iranian-American oil executive, who had been detained the previous October.

Both men were condemned for “collaboration with a hostile government” in 2016 and sentenced to 10 years in prison.

Iranian authorities released the elder Namazi, a former UNICEF staffer, because of his heart problem in 2018 and closed his case last year, commuting the sentence to time served.

But he is restricted to Iran, and Siamak Namazi remains in Evin Prison.

Iran has never presented evidence in public against the two men, among a series of foreign and dual nationals seized by the Revolutionary Guards in recent years. Some have subsequently been freed in prisoner swaps, but others are behind bars or trapped in Iran on prison furlough.

In February 2020, Siamak Namazi appealed to judiciary head Ebrahim Raisi, who is now Iran’s President to “stop trying to destroy me and my family”. He asked Raisi for “an opportunity to repair my poor mental and physical state and allow me to help my 83-year-old father recover…and rectify my family’s deplorable situation”.

There was no apparent reply from Raisi.

“My Dad Is Dying”

In a letter to the UN Special Rapporteur on the Right to Health, the Namazis’ attorney Jared Genser, said Baquer needs immediate surgery for a 95%-97% blockage in one of his internal carotid arteries, which supply blood to the brain.

One physician said the procedure is needed within 7 to 10 days. Genser asked for the operation outside Iran, so recovery is in a stress-free environment and away from the Coronavirus pandemic in Iranian hospitals.

US Secretary of State Antony Blinken backed the request:

Baquer Namazi needs immediate surgery, and the Iranian government should allow him to seek the medical attention necessary to save his life. It’s been almost six years since he’s seen his children. At a time like this, he should be surrounded by his entire family.

My dad is dying.

My father has already lost so much precious time. I am begging Iran to let him spend whatever small amount of time he has left with his family, my brother Siamak included.”