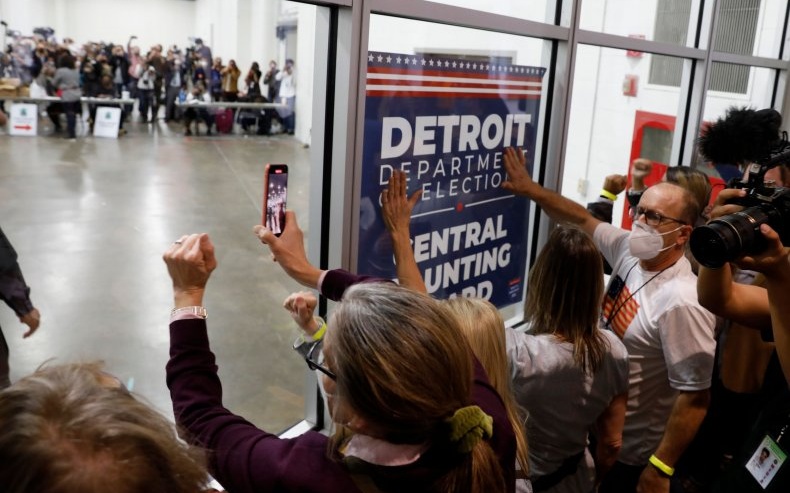 Supporters of Donald Trump try to disrupt the vote count at the TCF Center in Detroit, Michigan, November 4, 2021 (Jeff Kowalsky/AFP/Getty)

A State Senate committee of three Republicans and one Democrat published the report on Wednesday, summarizing, “This committee found no evidence of widespread or systematic fraud in Michigan’s prosecution of the 2020 election.”

The detail shreds conspiracy theories, including from Trump, his lawyer Rudy Giuliani, MyPillow chief executive Mike Lindell, and “those who have pushed [the] demonstrably false theories for their own personal gain”.

While focusing on Michigan, the document also exposes lies about the vote in other crucial states won by Joe Biden in November 2020, including Georgia.

Amid the dissection of the Trumpian disinformation, the Senators cited”a duty to make statutory improvements to our elections system” — “whether it is lack of clarity in the tabulation of ballots, unnecessary barriers to ensuring that every lawfully cast ballot is counted, inconsistent poll worker or challenger training, or simply a system not primarily designed to handle ballots cast absentee or otherwise prior to Election Day”.

Michigan Governor Gretchen Whitmer, a Democrat, has cautioned that she will veto any restrictions on voting in the guise of reform. Citizens can circumvent the veto with at least 340,047 signatures.

Secretary of State Jocelyn Benson, also a Democrat, said on Wednesday that she hopes Republicans will use the report to “cease their attempts to deceive citizens with misinformation and abandon legislation based on the lies that undermine our democracy”.

Republicans in other State legislatures are pursuing measures to curb voting access and rights, and have pushed through the measures in Florida and Georgia. Earlier this week, all 50 GOP Senators blocked the advance of the For The People Act to protect and expand rights.

Taking Down Disinformation and Lies

The report refutes the conspiracy theory, spread from Election Night, that local officials in Antrim County switched votes from Trump to Biden. In fact, an input error led to a brief mistabulation, which was quickly caught by officials checking the tally.

The senators recommend that Michigan Attorney General Dana Nessel should “consider investigating those who have been utilizing misleading and false information about Antrim County to raise money or publicity for their own ends”.

The senators also checked the claims of the Voter Integrity Project of 289,866 “illegal votes”. Staff called 40 people from the Project’s list of voters who supposedly received absentee ballots without requesting them. Only two said they received unrequested ballots, and one was on the state’s permanent absentee voter list. The other voted absentee in the 2020 primary and may have forgotten that he/she checked a box then to request an absentee ballot in November’s general election.

Another conspiracy theory, that Dominion Voting Systems machines were hacked to change votes, was dismissed both for Michigan and Georgia. Trump’s claims that Detroit’s tally was greater than the number of residents was rebuffed with the official totals that turnout in the city was less than 50% of eligible voters.

Nor was there any truth in secret dumping of ballots: “A widely circulated picture in media and online reports allegedly showed ballots secretly being delivered late at night but, in reality, it was a photo of a WXYZ-TV photographer hauling his equipment.”

MyPillow’s Lindell was specifically called out for his widely-derided conspiracy theories, “This narrative is ignorant of multiple levels of the actual election process.”

An attempt to disrupt the vote count at the TCF Center in Detroit was blamed on Republican operatives who called on people to protest, with the Trump supporters then trying to get into the building.

The Wayne County [which includes Detroit] Republican Party and other independent organizations ought to issue a repudiation of the actions of certain individuals that created a panic and had untrained and unnumbered persons descend on the TCF Center.