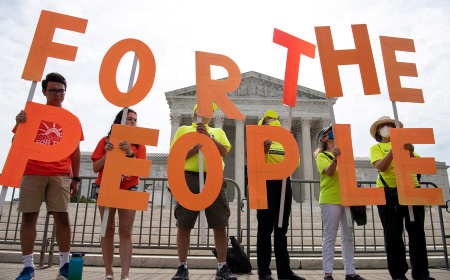 Demonstrators call on the US Senate to pass the For the People Act, outside the Supreme Court in Washington DC, June 9, 2021.(Caroline Brehman/CQ Roll Call/AP)

As expected, Senate Republicans block the voting rights legislation of the For The People Act.

The GOP maintained its blockade in a 50-50 vote to advance the bill. To overcome the Republican filibuster, 60 votes were needed.

No Republicans broke from the party whip of Senate Minority Leader Mitch McConnell.

Democratic Sen. Joe Manchin has led drafting of a compromise, seeking to attract moderate Republicans. His bill expands mail-in ballots and bans partisan gerrymandering while moving towards a requirement of voter ID.

But without the end of the filibuster, little progress is expected. McConnell has also ruled out the compromise.

Meanwhile, Republican-controlled State legislatures are acting to restrict voting rights. Florida and Georgia have implemented the restrictions, and a Texas bill was only blocked by a Democratic walkout in the State Senate.

I do want folks who may not be paying close attention to what’s happening…to understand the stakes involved here, and why this debate is so vitally important to the future of our country.

See also Obama: The Future of the Country Is At Stake

Some Democratic legislators and activists said on Tuesday that it is now imperative to abolish the filibuster, which McConnell has pledged to use in the obstruction of all major initiatives by the Biden Administration.

The people did not give Democrats the House, Senate and White House to compromise with insurrectionists.

Abolish the filibuster so we can do the people's work.

Activists indicated they will pursue rallies and advertising campaigns this summer.

Manchin and Democratic colleague Sen. Kyrsten Sinema have held out against any change to the filibuster rules.

Manchin held the line on Tuesday, despite the threat to his own voting rights bill: “The filibuster is needed to protect democracy, I can tell you that.”

McConnell reacted yesterday, “Whatever label Democrats slap on the bill, the substance remains the same.”