The Finns Party Is Changing Its Leader 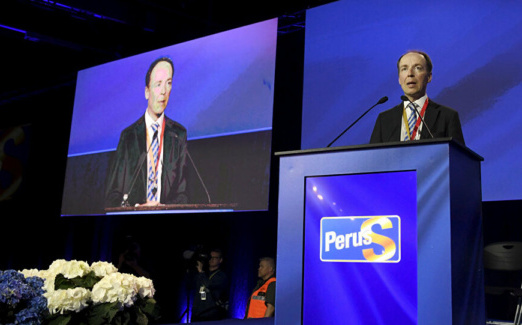 Jussi Halla-aho (pictured), the leader of Finland’s populist radical right Finns Party, will not run for a third term. He will step down from leadership in August.

Considering that Halla-aho has painted a picture of himself as a reluctant but duty-bound leader ever since his election in 2017, him relinquishing the party’s top slot is not a tremendous surprise.

But what explains the leadership change and how will the 2021 party congress affect the party?

During Halla-aho’s two terms as leader, the Finns Party has developed a more inclusive, open, and participatory organizational culture. Party MPs and regional and local activists have had greater leeway to contribute to the cause, organization and program under Halla-aho’s leadership.

Therefore, Halla-aho choosing to continue delegating power matches up to the party’s internalised rhetoric of a party thriving because of its grassroots.

In the last four years, the Finns Party has regained and surpassed its previous high point at national level and increased the size of its membership by about a third. In the latest round of local elections, the party increased its support in the municipalities by 5.6% across the country.

Halla-aho leaves behind a reunited, autonomous and extensive party-on-the-ground. However, crediting the recent victory in the municipalities to his leadership would be misleading.

The seeds of the party’s firm entrenchment in local politics were planted between 2008 and 2013, when it established nearly 150 new municipal associations. Given that during the previous municipal elections in 2017 the party was going through a severe internal crisis, a smaller victory in 2021 would have been considered a failure.

Halla-aho’s greatest legacy is the revival of enthusiasm for the party as a worthy cause among the activists within the network of local associations that the leader inherited. Retaining this re-established legitimacy and unity will be a key task for his successor.

Well-Timed Change at the Top?

Considering how unwavering support for Halla-aho has been amongst the Finns Party’s membership and almost 300 associations, a change of national leadership could theoretically unbalance the party’s internal cohesion and dent its electoral performance.

However, because of the delegation of leadership, there are several potential candidates to take over. They include, for example, vice-party leaders Riikka Purra and Juho Eerola, and the parliamentary group leader Ville Tavio. All enjoy strong support and legitimacy among members nationwide.

It is unlikely that the change of leader will cause widespread ideological or organizational realignment. The Finns Party will probably continue on its recently-established populist radical right alignment and its reliance on activists.

Changing leaders in the middle of the Parliamentary cycle could prove well-timed. Whilst it is likely that a lesser-known figure will lead the party, Halla-aho was deemed “too extreme” by the Centre party and the National Coalition Party in 2017. Therefore, with success in the next national ballots, The Finns Party may be better placed in any negotiations for a governing coalition.

The 2021 Finns Party Congress will also vote on rule changes. They are not likely to fundamentally change the current governance structure, apart from making the party council slightly more powerful and ensuring more regional representation on the party executive.

The proposed changes will not substantially decentralize power in the party. They will make the rules more coherent, placing some informal norms and practices of governance on a formal footing. A significant revision might be the consolidation of power of the most populous regions on the party council, at the expense of regions with fewer members.

However, as the executive has yet to publish final suggestions for the new rules, the only certainty at this point is that the party will have a new leader come autumn.

The Finns Party has developed to the point where the organization will persist, regardless of which member of the current elite takes the helm. And if the new leader pays heed to Halla-aho’s example of investment in a heartfelt connection with the party on the ground, it will continue to thrive.