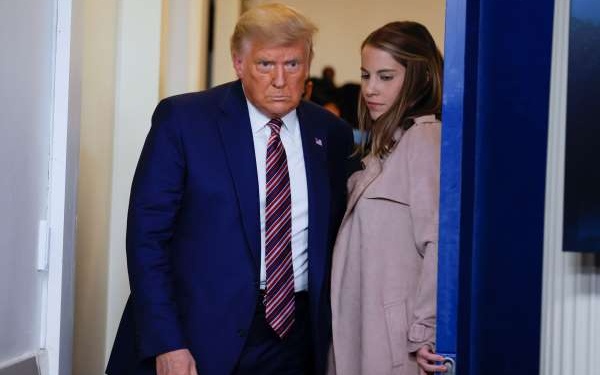 Donald Trump at a White House appearance before reporters, November 20, 2020

Trump summoned Michigan’s Senate Majority Leader Mike Shirkey, House Speaker Lee Chatfield, and five other state lawmakers on Friday. The Trump camp is hoping that the state’s legislature, with a Republican majority, would override the popular vote and choose Trump’s electors instead for the December 14 decision of the Electoral College.

But after their meeting with Trump, the Michigan delegation said in a joint statement:

We have not yet been made aware of any information that would change the outcome of the election in Michigan and as legislative leaders, we will follow the law and follow the normal process regarding Michigan’s electors. Michigan’s certification process should be a deliberate process free from threats and intimidation.

Biden carried Michigan, with its 16 electoral votes, by more than 154,000 votes. Attorneys for Trump, the Republican Party, and their allies have failed to block the process towards vote certification, in Michigan or any other swing state, in more than 30 lawsuits.

A recount is under way in two of Wisconsin’s largest counties. Biden triumphed by 20,565 votes in the state (10 electoral votes).

To overturn Biden’s 306-232 margin in the Electoral College, Trump has to find a way to claim Pennsylvania, Michigan, and one other state.

Michigan’s Shirkey and Chatfield had denied that they would try to overturn the election. They had said state law does not allow the legislature to select electors other than those for the winning candidate.

But Trump persisted, even after a disastrous press conference by his attorneys on Thursday. Led by ex-New York City Mayor Rudy Giuliani, they presented no evidence of fraud but loudly concocted a plot involving Joe Biden, Democratic leaders of 10 large cities, the late Venezuelan leader Hugo Chavez, the financier and philanthropist George Soros, “Antifa”, the Clinton Foundation, China, Cuba, and “Communists”.

Trump added large pharmaceutical companies to the conspiracy on Friday, telling reporters,“Big pharma ran millions of dollars of negative advertisements against me during the campaign – which I won, by the way.”

He accused Pfizer and Moderna, both of whom have reported vaccine trials with more than 90% success, of withholding the outcomes until after Election Day: “Maybe it would have made a difference….[But Democrats] would have found the ballots somewhere.”

“A Nation of Laws, Not Tweets”

Having failed to make even a plausible case of widespread fraud or conspiracy before any court of law, the President has now resorted to overt pressure on state and local officials to subvert the will of the people and overturn the election. It is difficult to imagine a worse, more undemocratic action by a sitting American President.

Sen. Lamar Alexander of Tennessee, who is retiring, called on Trump to lift his block on the transition to a Biden Administration:

It looks like [Biden] has a very good chance to be [President-elect] and if there’s any chance that he will be — and it looks like there is a very good chance — I believe the Trump administration ought to provide the Biden administration with all the transition materials and sources and meetings necessary so we have a smooth transition so both sides are ready on day one.

Biden and his staff have cited the damage from Trump’s refusal of the transition, including to management of the Coronavirus pandemic which has killed more than 250,000 Americans.

See also Coronavirus: Fauci’s “Cavalry Is on the Way” — But Will Trump Team Stop Them?

And Sen. Ben Sasse of Nebraska derided the Thursday performance of Trump’s lawyers: “Wild press conferences erode public trust. So no, obviously Rudy and his buddies should not pressure electors to ignore their certification obligations under the statute. We are a nation of laws, not tweets.”