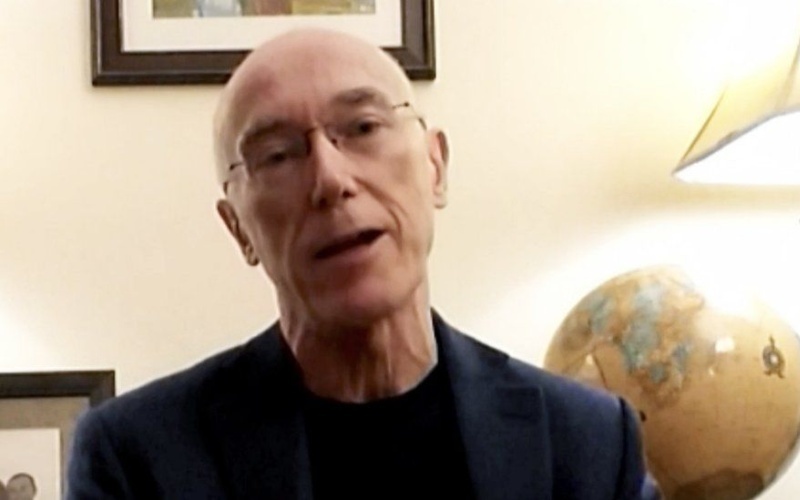 Professor Paul McKeigue of the University of Edinburgh (Channel 4)

The UK academics who collaborated with Russian officials, to cover up war crimes in Syria, helped set up a website as a front for their activity.

Piers Robinson of the “Working Group on Syria, Propaganda and Media” coordinated the establishment of the site “Berlin Group 21” to disseminate statements trying to undermine the inspections of Assad regime chemical attacks.

Robinson’s Working Group colleague Paul McKeigue revealed the operation in his correspondence with “Ivan”, whom he thought was a Russian spy. McKeigue also wrote that he and Robinson were working with Russian officials in four different countries on disinformation to tarnish the Organization for the Prohibition of Chemical Weapons.

McKeigue indicated to “Ivan” that a new site was needed because the Working Group was under sustained criticism over its claims. These included the assertion that civilians killed in chemical attacks were actually part of “managed massacres” by Syrian opposition groups, including White Helmets rescuers.

In fact, Von Sponeck said he needed Robinson to post the main initiative of “Berlin Group 21”: a “Statement of Concern” trying to undermine the OPCW’s investigation of an April 2018 chlorine attack that killed 43 people in Douma, near Damascus.

Von Sponeck also did not know who registered the site and had to enlist Robinson, who knew the identity of the “US citizen”.

The former diplomat told Bellingcat that he had not actually read the OPCW Fact Finding Mission report on the Douma attack. Instead, he asked Robinson for “information”.

Peter Ford, a former UK Ambassador to Syria, helped gather signatories for the Statement of Concern. Among them was Lord West, a former UK Chief of Naval Staff and current member of Parliament’s Intelligence and Security Committee.

West also said he had not read the OPCW’s reports in full.

Ford is co-chairman of the British Syrian Society, which is headed by Fawaz Akhras, the father-in-law of Bashar al-Assad.

Contacted by Bellingcat, Ford initially said he knew little about “Berlin Group 21″. He then said, “I know who you are. Don’t call me again.”

Aaron Maté, an American activist who writes for The Grayzone, has confirmed that he is part of the network, which includes UK academics, collaborated with Russian officials to cover up the Assad regime’s war crimes in Syria.

A senior editor with Ruptly, a Russian State video outlet, passed information on activists and witnesses to war crimes to the Working Group. The database was part of the attempt to undermine investigations of chemical attacks, notably the April 2018 chlorine assault which killed 43 people in the town of Douma near Damascus.

The editor, Stephen Mangan, is working on a “documentary” about Douma. He wrote the Working Group’s Paul McKeigue and Piers Robinson, “I do anticipate making our open source work transparent to you and Aaron in the hope that we can collaborate and leak particular elements of interest.”

Maté wrote on Twitter, “Yes, I am the Aaron referred to there.”

Alongside the Russia campaign to discredit the Organization for Prohibition of Chemical Weapons, Maté has been prominent on Twitter and in posts for The Grayzone pushing misinformation and disinformation about the OPCW and the Douma attack.

His primary “source” are the e-mails of Brendan Whelan, the former OPCW staffer who has been collaborating with Russian officials and the Working Group. It is unclear who put Whelan in contact with Maté.

The Grayzone was founded by Max Blumenthal in January 2016, a month after he attended a celebratory dinner in Moscow, which including President Vladimir Putin, for the Russian State outlet RT.

Journalist and academic Idrees Ahmad notes the leak of information about survivors and witnesses of the Douma chemical attack could put them at risk, given that the Assad regime controls the area.

This is quite an admission. @thenation published a disinformation piece attacking the @OPCW by this Grayzone blogger. He is now confessing that he's the Aaron mentioned by a Russian journalist who was going to be used to dox survivors and witnesses of the 2018 Douma massacre. https://t.co/lsuLgXd96a

ORIGINAL ENTRY, APRIL 20: Seeking to cover up the war crimes of Syria’s Assad regime, a group of UK academics worked with Russian diplomats in four missions from North America to Europe.

The academics, in the self-styled “Working Group on Syria, Propaganda and Media”, collaborated with the Russians as part of their denial of the regime’s sarin and chlorine attacks against Syria’s civilians.

One of the academics, Prof. Paul McKeigue of the University of Edinburgh, revealed the relationship in an e-mail exchange with a man whom he thought was a Russian spy.

The Working Group includes McKeigue’s colleague at Edinburgh, Prof. Tim Hayward, a specialist in environmental political theory; Prof. Piers Robinson, formerly of the University of Sheffield, a political scientist; and Prof. David Miller, a oolitical sociologist who is on leave from the University of Bristol over claims of anti-semitism.

None of the four have any expertise on Syria or chemical weapons. However, from 2017, they have posted a series of “reports” denying the chemical attacks. They have denigrated the Organization for the Prohibition of Chemical Weapons, seeking to undermine its inspections, as well as assailing the White Helmets civil defense, opposition activists, and journalists and academics who write about Syria’s 121-month conflict.

This week, as part of the latest Russian-organized disinformation campaign to undermine the OPCW, Robinson has given interviews to Iran’s State outlet Press TV and the Italian site Pressenza. The Group are also promoting the attacks on the inspectors by The Grayzone’s Aaron Maté.

The campaign comes days after the OPCW found the Assad regime responsible for the chlorine attack on Saraqib in northwest Syria in February 2018. The OPCW’s Conference of State Parties is meeting on Tuesday to consider possible punitive action against the regime.

McKeigue’s e-mails to “Ivan” were part of an attempt by the group to destroy the reputation of the Committee for International Justice and Accountability, which has collected more than a million regime documents as it builds a case for prosecution of war crimes.

With McKeigue threatening to reveal the location of CIJA’s archives and staff, exposing them to risk, the organization set up “Ivan” to find out the extent of the Working Group’s knowledge.

McKeigue wrote “Ivan” about “complicated lines of communication” between the Working Group and Russian Foreign Ministry officials in embassies in The Hague, New York, London, and Geneva.

The Working Group worked with the Russians on an informal “Arria formula” presentation at the UN in New York in January 2020, deriding the OPCW’s investigations.

Another link was with Alexander Shulgin, Russia’s Ambassador to the Netherlands and its permanent representative to the OPCW in The Hague. McKeigue told “Ivan” that the disgruntled ex-OPCW staffer Brendan Whelan — used by Russia, the regime, and the Working Group to discredit the inspections — coould be reached via Shulgin: “Brendan keeps in contact with your embassy in Den Haag.”

A Network Including WikiLeaks and Russian State Media

WikiLeaks introduced Whelan, under the pseudonym “Alex”, to journalists and former OPCW officials in a press conference in autumn 2019. The event spurred the Russian campaign to deny the chlorine attack in Douma, near Damascus, in April 2018, after the OPCW found “reasonable grounds” that chemicals were used.

McKeigue sent “Ivan” a copy of Taylor’s “legal advice memorandum” explaining how to make claims against the OPCW. The academic indicated that Taylor’s husband, Geoffrey Roberts, represented Whelan in his dispute with the organization.

In another e-mail, McKeigue boasted to “Ivan” about the Working Group’s collaboration with Stephen Mangan, a senior editor at the Russian State media outlet Ruptly.

Mangan passed material from a database, with information on activists and witnesses to war crimes, to the Working Group.

However, the relationship was strained when one of Mangan’s local correspondents, interviewing witnesses, found that the Assad regime had carried out the chlorine attack that killed 43 people in Douma in April 2018.

The Working Group claims — with no evidence — that the victims were a “managed massacre”, with anti-Assad activists placing the bodies in the building.

After Mangan told McKeigue of the findings from the local correspondent, the epidemiologist asked “Ivan” to investigate the editor for a lack of loyalty.

McKeigue declined to comment to The Daily Beast about the revelations.