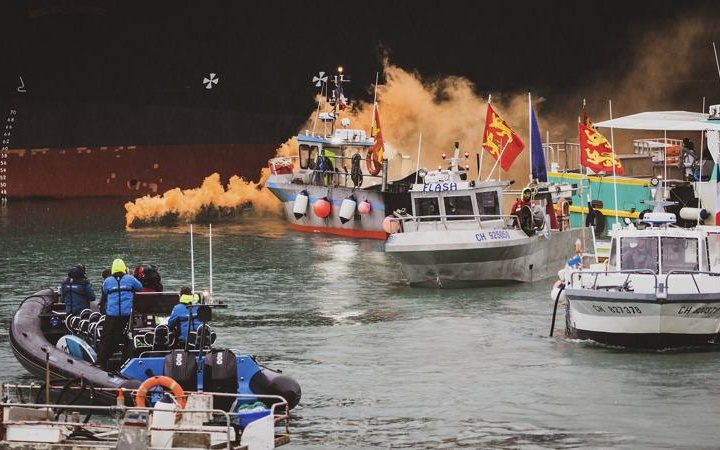 If you have “Jersey and French Fishing Boats” on your card for 1st Brexit military showdown — you’re a winner.

The invocations of 1914 and 1939 continued for the next 48 hours. “Boris Sends Gunboats Into Jersey“, the Mail trumpeted. A UK Government official fed The Telegraph, “At least when the Germans invaded they kept the lights on.” Somewhat bizarrely, France’s forces waged battle on their own port: “Now the French Threaten to Blockade Calais“, before it was V-F (Victory Over France) Day: “Victoire! Two Royal Navy Ships Send French Fishing Flotilla Scurrying Back Home”.

Now that the 1st Brexit War has concluded, let’s rewind to what actually happened — and why the tabloid jingoism is not a portent of victory but a diversion foreshadowing the UK’s gradual but steady defeat by markets rather than missiles.

The French “invasion” of Jersey was by about 80 fishing boats pressing claims for rights amid Brexit’s murky provisions over offshore waters.

On April 30, the UK declared a fishing zone around Jersey, permitting 41 vessels equipped with Vessel Monitoring Systems. France’s Ministry for Maritime Affairs protested that the British list was unilateral, outside the arrangements under the Brexit agreement, with the exclusion of many French boats. Those that were allowed facing limits on equipment and the number of fishing days.

“If the UK wants to introduce new provisions then it must submit these to the European Commission, who then notifies us, which enables us to engage in a dialogue. At this stage, we find that these new technical measures are not applicable to our fishermen as they stand,” the Ministry said.

The European Commission prepared to engage London over the announcement, but it was overtaken by French reaction. The regional fisheries committees of Brittany and Normandy threatened “a suspension of all economic relations with Jersey, including the ferry link between Jersey and the Continent”. French fishermen threatened a retaliatory blockade of UK boats.

Under pressure to stand up to London, the Macron Government warned that electricity to Jersey, provided through underwater cables, could be cut. Maritime Minister Annick Girardin told Parliament, “I am sorry it has come to this [but] we will do so if we have to.”

With the French boats gathering at the mouth of Jersey’s harbour, the UK Government — amid tensions about alleged personal corruption, including of Prime Minister Boris Johnson, and cronyism — send Royal Navy gunboats into the Channel. France responded with two patrol boats.

The Daily Mail had its “war”. “French Trawler Rams UK Boat“, it shouted.

Soundbites of battle, past and present, came from participants like “Jean-Claude La Vaullée, skipper of Le Cach”: “I’ve refuelled the boat – we’re ready to restage the Battle of Trafalgar”. The head of the Jersey Fishermen’s Association, Don Thompson, declared the French fishing protest “comes pretty close to an act of war” and invoked a new Axis of Evil: “[This] is almost like something you would see from Iran or Russia.”

Deep in the stories — and in The Guardian, rather than the tabloids — a leading Jersey oyster and mussel fisherman, Chris Le Masurier, said the problem was local officials and Brexit’s chaotic implementation:

I have been dealing with France for 30 years and I’ve learned there is a way to deal with our closest neighbour. It seems that the new licences were sent out Friday and then everyone ran out of the office. It was a complete insult to the French.

On 7 May, the “ceasefire” was announced. Following talks with Jersey officials, the French vessels departed.

But nothing was resolved. A European Commission spokeswoman said “additional conditions” attached to the new licences had breached the Brexit deal. The UK Government proclaimed that Prime Minister Boris Johnson had given his “unequivocal support” for the island and that the Royal Navy gunships would “remain in place to monitor the situation as a precautionary measure”.

The Daily Express laughed, “‘Surrender by Teatime!’ French Fishermen Mocked”. Then it beat the drum of battle once more: “‘It’ll Be a War Zone!’ Jersey Fishermen Warn French Ships to Stay Away.”

Part of the ongoing problem is the patchwork of provisions over fishing, rushed through in the last-minute drive for a Brexit agreement by 31 December last year.

The deal provides for the transfer of 25% of EU boats’ fishing rights in UK waters to the British fleet, over an “adjustment period” of five years.

Both sides have agreed that 25% of EU boats’ fishing rights in UK waters will be transferred to the UK fishing fleet over a period of five years. After 2026, annual talks will set the amount that EU fishing boats can catch in UK waters, and the UK catch in European waters.

But the general provisions did not extend in detail to local situations, for example, in Jersey.

That gap has been exacerbated by a UK Government ready to set aside agreement provisions, to the point of breaking international law. Prime Minister Johnson — “economical with the truth” — has been prepared to scrap the Northern Ireland Protocol. So why should bureaucrats, in London or Jersey, worry about actions that are not just outside the deal but might jeopardize it?

If those skirting of provisions produced a tabloid frenzy over “war”, then that makes for a useful diversion. Sunk in Jersey Harbor was the news that the UK and Norway failed to reach a fishing deal for this year, leaving UK fleets with no access to Norwegian waters and their stocks of cod. The annual haul has been reduced from £32 million in 2018 to nothing in 2021, seriously affecting fishing areas like Hull.

Sunk was the House of Commons committee report that the UK Government failed seafood exporters, not providing appropriate support or preparing for Brexit’s effects. Sunk were the questions about the current status of the industry whose trade to Europe dropped 83% in January.

The Government has benefited, possibly even saved itself or the Prime Minister, from a vaccine rollout overtaking its handling of a pandemic which has cost almost 130,000 lives. Facing a scandal over the funding of Boris Johnson’s lifestyle, complete with expensive wallpaper for 10 Downing Street, it could use the Jersey row as a “dead cat” diversion.

The tactics are blunt but effective in the short-term. By the day of the Jersey “ceasefire”, the island could be pushed aside for the Conservative success in English elections and the corresponding turmoil in the Labour Party.

However, the short term is short, and Brexit’s consequences are long. The 2021 recession can be masked to some extent by its pre-emptive appearance amid Coronavirus in 2020. However, any recovery is likely to be restricted by the new, tangled, often fumbled terms of trade with the Continent.

The “dead cat” stops at the Scottish border: the Scottish Nationalist Party’s near-majority triumph doesn’t mean mean an independence referendum is imminent — but it does bolster an SNP administration which can pose itself as the competent counterpart to Johnson and his shady crew. And the Prime Minister will be hoping that any English attention to the escalating tension in Northern Ireland, as with the flare-up of violence earlier this month, will be customarily fleeting.

If and when these troubles are compounded, the Johnson Government, as well as the tabloids, may be looking to France for a 2nd Brexit War.