From Sands to Soleimani: Iran’s Nationalism of Martyrdom 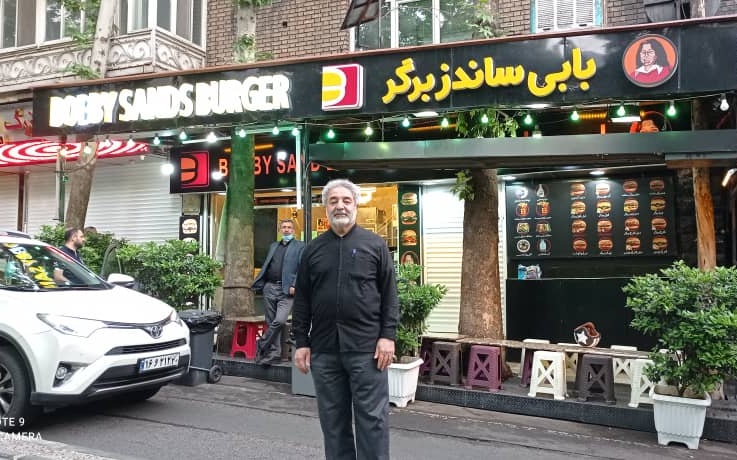 Under the shade of the trees lining Gholam Jafari street in Tehran, just off the popular Tajrish Square and opposite the entrance to the Saadabad Palace, the tables are set up for the trendy burger restaurant.

The owner, Akbar Rahboodan, greets customers. Neighboring shopowners hurry over and pay their respects to “Haji Agha” as he sits down to explains why he chose the name Bobby Sands Restaurant.

Because he was a hunger striker that fought for a cause, and his cause was endorsed by the Islamic Republic of Iran.

We wanted to keep his legacy alive by choosing this name Such a beautiful name — Bobby Sands.

The 40th anniversary of Sands’ death was this month. On May 5, 1981, he was the first detainee to die on hunger strike in the Long Kesh prison in Belfast. He succumbed on the 66th day. Nine fellow strikers would perish in the protest over conditions.

On May 5, 2021, I ask Mr. Rahboodan why he feels so strongly about a 27-year-old Irish Republican Army member who died as Iran was embroiled with Iraq in one of the world’s deadliest 20th-century conflicts. He replies:

We knew Sands was on a hunger strike that lasted 66 days, and this was a protest against British oppression against the Irish. Because he was fighting for freedom, we knew what he had been going through, as we ourselves had fought for freedom in Iran during the Islamic Revolution in 1979. H

In 1981, I was present at Tehran Friday Prayers, led by Ayatollah Khamenei — now the Supreme Leader — when he declared to us all, shortly after the passing of Sands, that he was to be recognised as a martyr.

And so Bobby Sands would be linked not only to the course of events on the Irish island but in Iran, through the war of “Sacred Defense” to the passing of the Islamic Republic’s founder, Ayatollah Khamenei, to the tensions with Israel and the US that continue in 2021.

We know that especially during the 1981 hunger strike, there were huge protests all over the world, including in the Basque Country, in Paris, in Amsterdam, and in Tehran where Winston Churchill Avenue was renamed Bobby Sands Street — still its name today.

International solidarity has been very important to us at times in our struggles. We know the value of it, and we profess it, and we act on it.

In January 2020, Iran had a new martyr. Lt. Gen. Qassem Soleimani, the head of the Revolutionary Guards’ Qods Forces, was assassinated by a US drone outside Baghdad International Airport.

Sixteen months later, Soleimani and nationalism are enshrined across towns and cities in Iran. Highways, roundabouts, roads, and intersections bear his name. Billboards depict him alongside the honorific Shahid (Martyr).

Millions of people crowded the streets of Iran during his funeral procession. The marches were also in cities in Iraq, Syria, Afghanistan, Pakistan, Lebanon, and Palestine. In last week’s annual Qods Day parades, demonstrators lifted portraits of the late General and his fellow martyr, Abu Mahdi al-Muhandis, the head of the Iran-supported militia Kata’ib Hezbollah. 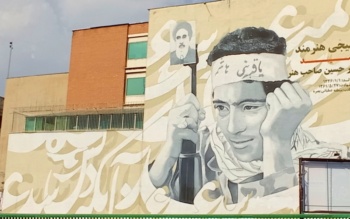 It is not just the leadership in Tehran that has proclaimed Soleimani’s legacy. Many Iranians have adopted the mantra, “We are all Haji Qassem”, exclaimed as his funeral procession passed through the streets. This legacy is entwined with that of thehundreds of thousands of martyrs from the Iran-Iraq War to the recent fight against the Islamic State.

In the Martyrs Section of the Behesht Zahra cemetery, south of Tehran, mothers weep over sons — many of them who were teens — lost 35 years ago. Iranian flags decorate the graves.

Just as Belfast has murals of the 10 hunger strikers who died in 1981, the images of the dead line the walls, boulevards, and highways of the Islamic Republic. Many depict martyrs from the Iran/Iraq war, some slowly fading and peeling with time in the heat of the Tehran sun. However, many more are being added — Soleimani proudly welcomes travelers along re-named highways in the capital. 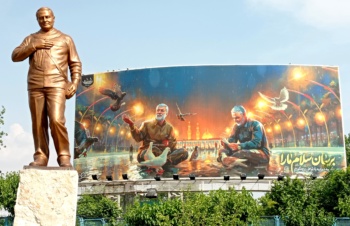 At the Bobby Sands Restaurant, Mr. Rahboodan tells me with certainty about Bobby Sands and Qassem Soleimani:

Their names will live on.