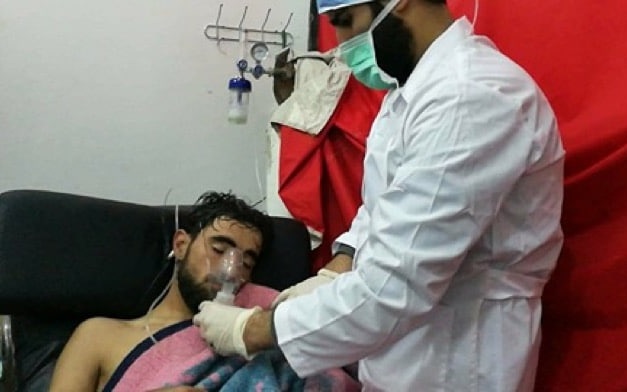 A medic treats a victim of the chlorine attack on Saraqib, Idlib Province, Syria, February 4, 2018

The member states of the Organization for the Prohibition of Chemical Weapons have suspended some of the Assad regime’s rights and privileges, in light of the regime’s chemical attacks and withholding of chemical stocks.

In a 87-15 vote with 34 abstentions, the Conference of State Parties said the resolution was a “vital step to maintain the credibility of the Chemical Weapons Convention”, and called on Syria to come back into compliance.

The resolution expressed “deep concern” at the failure of the regime to declare fully its chemical stocks and to allow investigations of the sarin and chlorine attacks. It gave full support to OPCW investigators, who have been targeted by a protracted disinformation campaign by Russia, the regime, and their supporters.

The White Helmets civil defense has welcomed the OPCW findings adding to reports that “have declared the responsibility of the Assad regime’s systematic use of chemical weapons on Syrian territory and in residential territory against Syrian civilians”.

The rescuers call for a “clear, rapid, and serious mechanism to hold the Assad regime accountable”.

Analyst Tobias Schneider notes the significance of attribution of the chlorine attack to the pro-Assad militia Tiger Forces:

Especially interesting: The Syrian formation identified by the OPCW as responsible for these CW attacks is Russia's closest partner on the ground. Its commander, Suhail Al-Hassan, travels with a Russian SOF bodyguard. Their ops room host Russian advisors who oversee the battles. https://t.co/vjEHOhVlEq

ORIGINAL ENTRY: The Organisation for the Prohibition of Chemical Weapons finds “reasonable grounds” to attribute responsibility to the Assad regime for a February 2018 chlorine attack in northwest Syria.

In a 65-page report, the OPCW’s Investigation and Identification Team assessed:

At approximately 21:22 on 4 February 2018, during ongoing attacks against Saraqib, a military helicopter of the Syrian Arab Air Force under the control of the [pro-Assad militia] Tiger Forces hit eastern Saraqib by dropping at least one cylinder. The cylinder ruptured and released a toxic gas, chlorine, which dispersed over a large area affecting 12 named individuals.

The finding follows the OPCW’s formal attribution of responsibility to the Assad regime for the April 2017 sarin attack on Khan Sheikhoun, also in Idlib Province, which killed about 90 people and wounded hundreds. In its first report last April, the IIT assessed the regime’s use of sarin and chlorine on Latamineh, in neighboring Hama Province, in late March 2017, days before the Khan Sheikhoun assault.

Monday’s report is based on interviews with more than 30 witnesses, analysis of samples and remnants collected in Saraqib, review of casualties and testimony of medical staff, examination of imagery, extensive consultation with experts, and topographic analysis and gas dispersion modelling.

The IIT concluded its investigation despite the obstacle of the Assad regime, which has prevented any access to sites of sarin and chlorine attacks, including Saraqib.

The town, southeast of Idlib city, was reoccupied by a Russia-regime offensive in March 2020, just before Moscow and Turkey agreed a ceasefire to halt the 11-month advance into opposition territory.

The investigators rejected the regime’s claim that the attack was staged by anti-Assad forces and White Helmets rescuers through “a tunnel containing chemicals” with videos of people pretending to be victims.