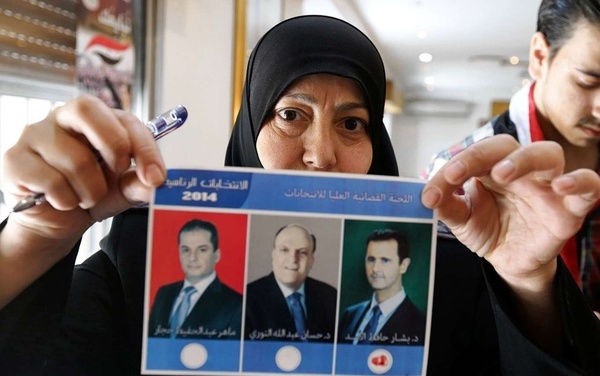 Two nominal opponents have been chosen for Bashar al-Assad in the regime’s staged Presidential “election” in Syria on May 26.

In 2014, Assad was credited with 88.7% of the vote against two selected opponents, who of whom backed the Syrian leader during the campaign.

Senior UN officials say the ballot does not fulfil Security Council resolutions calling for a political process, a new Constitution, and free elections under UN supervision.

The regime is facing economic crisis in its parts of Syria, including widespread shortages of fuel, electricity, food and other essentials.

The regime has announced a raise in salaries for public sector workers, far too small to cover soaring inflation. It has tried to crack down on currency speculators as Syria’s pound has plunged to about 4,000:1 on the open market, compared with 47:1 at the start of the Syrian conflict in March 2011.

Subsidies have been slashed on food, including bread, and fuel.

On Sunday, Assad proclaimed an amnesty for some men avoiding forced conscription, and for some currency speculators, smugglers, and those detained for petty offenses.