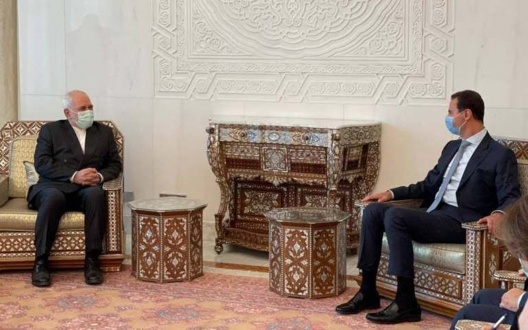 Zarif met Assad on Wednesday for the show of unity. The pretext for the discussion was Iran’s “satisfaction” with the regime’s staged Presidential “election” on May 26.

The official Iranian account also cited Zarif’s comments about “the crimes of the Israeli regime in the occupied territories against the defenseless people of Palestine”, amid an escalation of Israel’s bombing of Gaza and Hamas rockets fired into Israeli territory.

The summary cited “cooperation in the economic and cultural fields”, without any detail about the crisis inside Syria.

Iran has been the vital lifeline of the regime since the Syrian uprising of March 2011, providing billions of dollars in lines of credit. However, the aid has been constrained by Tehran’s own economic problems, and by US and Israeli effort to curb the supply of Iranian oil to Damascus.

The regime has slashed subsidies for fuel and food, as a falling currency has fed rampant inflation. Residents of regime-held areas queue for hours for bread and petrol, and electricity is in short supply.

Zarif’s trip also may have a personal motive, trying to restore his nominal authority in Iranian foreign policy.

Earlier this month, the Foreign Minister was embroiled in domestic turmoil and criticism, after a leaked audiotape of his complaints about the primacy of the Revolutionary Guards in Iran’s Middle Eastern policy and operations.

The Supreme Leader publicly derided Zarif, who was forced into a step back from the remarks. The Foreign Minister is almost certain to leave his post after June’s Presidential election.