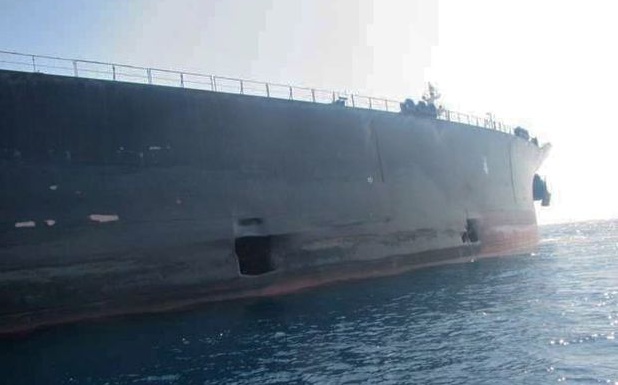 Another Iranian ship has reportedly been attacked with limpet mines attached to its hull.

Iranian State TV said the MV Saviz, a cargo ship and suspected base for the Revolutionary Guards, was struck in the Red Sea off Yemen.

Iran’s semi-official Tasnim News Agency posted, “The vessel Iran Saviz has been stationed in the Red Sea for the past few years to support Iranian commandos sent on commercial vessel [anti-piracy] escort missions.”

Israeli Defense Minister Benny Gantz, while refusing to comment on the specific case, said “The State of Israel must defend itself. Every place we find an operational challenge or operational need, we will continue to act.”

An American official said Israel notified the US that its forces attacked the MV Saviz about 7:30 a.m. local time on Tuesday.

#Iran MFA Spox: Iranian ship, #Saviz, was slightly damaged in an explosion at Red Sea off the coast of Djibouti on Tuesday at 6am local time, the origin & quality of which are under investigation. No casualties were reported. Iran will take all necessary measures thru intn'l orgs pic.twitter.com/VETIyYkdzh

The investigation estimates that each shipment may include a million or more barrels of oil, worth up to $50 million. Most ships were targeted after they set out from ports in southern Iran and crossed the Red Sea, navigating the Suez Canal to the Mediterranean. Other used a longer route around Africa and passing through the Straits of Gibraltar into the Mediterranean. The port of destination was usually Baniyas, in western Syria.

According to Haaretz, the smuggling route was detected by Western intelligence organizations in 2018.

The site adds that some attacks were “quiet”, damaging the ships without a bomb or missile. There were no casualties, and no environmental damage.

Israeli authorities say that Iran is using payments for the oil to support weapon supplies to Lebanon’s Hezbollah.

The Islamic Republic of Iran Shipping Line says a container ship was targeted on Wednesday in a “terrorist attack”, slightly damaging the vessel.

IRISL spokesman Ali Ghiasi said the Shahr-e Kord was struck as it was traveling to Europe. A small fire was quickly put out by crew members.

Ghiasi said the ship “will continue on its route after damage assessments and repair”.

ORIGINAL ENTRY, MARCH 12: Israel has targeted at least a dozen ships bound for Syria, most of them carrying Iranian oil, according to US and regional officials.

The officials told The Wall Street Journal that Israel has used weapons such as water mines since late 2019 against Iranian vessels or those with Iranian cargo. The strikes have targeted cargo such as weapons, as well as transport of oil.

Iran has propped up Syria’s Assad regime since 2011 with billions of dollars in lines of credit, including for oil supplies. Tehran has continued the shipments in defiance of US and European sanctions, although the Assad regime is facing a fuel crisis in areas under its control.

Iranian officials have reported some of the attacks, saying they suspect Israeli involvement. Israeli Prime Minister Benjamin Netanyahu’s office referred questions to the military, which did not comment.

The Iranian oil supply to Syria is controlled by Revolutionary Guards officials, according to US authorities in court cases filed to seize the ships because of circumvention of sanctions.

In July 2019, the Iranian supertanker Grace 1 was boarded by UK marines and local police off the coast of Gibraltar, with London claiming that the transport of oil violated European Union sanctions.

Iran retaliated by seizing the UK-flagged, Swedish-owned Stena Impero tanker in the Strait of Hormuz, and the Grace 1 — renamed the Adrian Darya 1 — was released after seven weeks.

US officials claimed the Revolutionary Guards also damaged two oil tankers in the Persian Gulf with mines placed on the hulls.

On February 26, the Israeli-owned cargo ship MV Helios Ray was struck by an explosion which damaged the hull and forced the ship to port for repairs. Israeli Prime Minister Netanyahu and senior officials blamed Tehran.