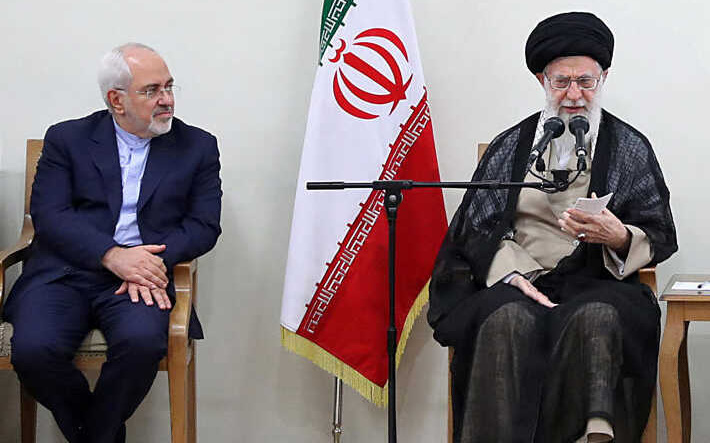 ORIGINAL ENTRY, MAY 2: Iran’s Supreme Leader has blasted the Foreign Minister, Mohammad Javad Zarif, over Zarif’s leaked remarks about the primacy of the Revolutionary Guards in foreign policy and operations.

Last week, an 191-minute extract from Zarif’s oral history on February 24 — for the records of a Government research center — were leaked by an unknown person to the London-based, Saudi-funded TV channel Iran International.

He said that the Guards often acted without consulting the Government, and that he learned of the extent of Israeli attacks on Assad regime and Iranian targets in Syria from former US Secretary of State John Kerry rather than from the military.

In an especially controversial passage, Zarif said the late Gen. Qassem Soleimani — the head of the Guards’ Quds Force, killed in a US drone strike in January 2020 — went to Moscow to “demolish our achievement” with the 2015 nuclear deal.

Khamenei said on Sunday, “We shouldn’t say things that would convey the meaning that we are repeating what [our enemies] are saying, whether on the Quds Force or on martyr Soleimani.”

#Iran leader (on leaked audio of FM Zarif): We heard some officials saying some words that were shocking. We heard that the enemy media spread those words. It is unfortunate to hear them…We should not repeat what they (enemy) said about the Quds Force & Qassem Soleimani.

The Supreme Leader did not deny the substance of Zarif’s remarks. Indeed, he reinforced them by saying the Foreign Ministry does not shape foreign policy but merely implements it.

He said the authority for foreign policy is with the Supreme National Security Council, comprised of top-level officials from different parts of the regime.

After the reprimand, Zarif praised Khamenei for a “unifying” speech: “Following the opinions and insights of the Leader is an undeniable necessity for foreign policy.”

He said he hoped that he and his colleagues, currently pursuing talks in Vienna over the 2015 nuclear deal, can fully implement the Leader’s ideas for Iranian progress.

#Iran FM @JZarif, in reaction to the speech by the leader, says "to me & my colleagues leader's compassionate remarks are last say & end point for expert discussion". He added he will work together with other officials in country in fully implementing the views of the leader.

At the time of the taped interview, Zarif reportedly asked Khamenei for support against pressure from conservatives. The Foreign Minister promised not to run in June’s Presidential election.

Last week, after the leak of the audio, the Foreign Minister said he “was very sorry that a secret theoretical talk regarding the need for synergy between diplomacy and the (military) field…turns into domestic infighting”.

However, he implicitly pressed his case about the Guards’ pre-eminence in foreign policy, calling for a “smart adjustment” and “priorities through legal structures and under the great purview of the Supreme Leader”.

President Hassan Rouhani did not refute Zarif’s comments, but blamed the leak of the audio on “the Zionist Regime, regional reactionaries and the United States” because they “are angry about Iran’s achievements [and] because all the plots that they had attempted to hatch against our country for four years was gone”.