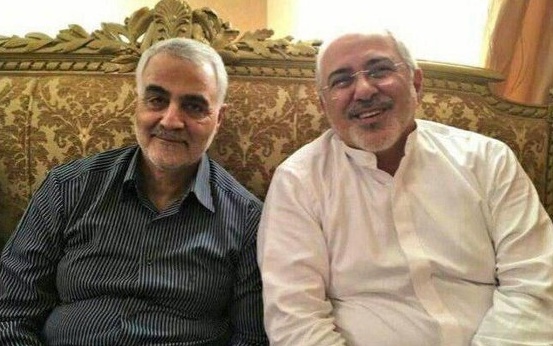 President Hassan Rouhani has blamed the leak of an audio of Foreign Minister Mohammad Javad Zarif’s views on “the Zionist Regime, regional reactionaries and the United States” because they “are angry about Iran’s achievements [and] because all the plots that they had attempted to hatch against our country for four years was gone”.

Rouhani did not deny the content of the 191-minute extract, in which Zarif said that the Revolutionary Guards were running Iranian policy and operations outside the Islamic Republic and that they were failing to inform the Government, let alone consult with it.

Instead, Rouhani said, “Stealing a recording and publishing it… [at] this critical juncture is something that needs to be closely looked into. This recording was published by those who are against Iran, the people of Iran and the interests of our country — exactly at the time when we are making the best achievements in [nuclear talks in] Vienna — in order to sow discord in our country.”

In his first public comments, Zarif said on Instagram, “I was very sorry that a secret theoretical talk regarding the need for synergy between diplomacy and the (military) field…turns into domestic infighting.”

He said he favors a “smart adjustment” between the military and diplomatic spheres. But he implicitly maintained his “honest and passionate” comments about the Revolutionary Guards’ prevalence in foreign policy and operations as he called for “setting priorities through legal structures and under the great purview of the Supreme Leader”.

The reformist Iranian site Rouydad 24 reports that, about the time of his private interview revealing tensions with the Revolutionary Guards, Foreign Minister Zarif was writing the Supreme Leader to ask for relief from pressure from conservatives.

A “source close to Zarif” said the letter was accompanied by Zarif’s promise not to run in the June Presidential election: “Zarif wants to negotiate within the framework of national interests, and the success of the negotiations is more important to him than candidacy.”

Rouydad 24 does not mention any response by the Supreme Leader to the letter.

In one of his most provocative statements, Zarif said the late Maj. Gen. Qassim Suleimani — the commander of the Quds Force, the Guards’ branch for operations outside Iran — worked with Russia to undermine the 2015 nuclear deal between Iran and the 5+1 Powers (US, UK, France, Germany, China, and Russia).

Soleimani, revered by many Iranians, was the central figure in Iranian policy and operations from Syria’s 121-month conflict to the Iraq, including the fight against the Islamic State, to Lebanon. He was assassinated in a US drone strike outside Baghdad International Airport in January 2020.

The leak comes amid indirect talks in Vienna over US re-entry to the nuclear deal, the lifting of American sanctions, and Iran’s return to compliance. The Islamic Republic is also preparing for Presidential elections in June, with hardliners hoping to take the post from the outgoing centrist Hassan Rouhani.

The 191-minute extract from interview in March, with economist Saeed Laylaz, is part of an oral history project documenting the work of the Rouhani Administration for Government archives. The tape was leaked to the Saudi-funded, London-based TV channel Iran International.

He said he was ignorant of some of the military’s maneuvers, often to his embarrassment.

Iran’s Foreign Ministry did not deny Zarif’s statements. Instead, spokesman Saeed Khatibzadeh criticized the “unethical politics” and said the portion released did not represent Zarif’s complete views, notably his respect and love for Soleimani.

Subservient to the Guards

Speaking with his friend Laylaz, Zarif praises Soleimani and say the US assassination was a blow more damaging than the destruction of an entire Iranian an city. But his description of a positive relationship is before the US interventions in Afghanistan in 2001 and Iraq in 2003.

he said Russia did not want the 2015 nuclear agreement to succeed because it did not want Iran to have better relations with the West. He said Soleimani went to Moscow to “demolish our achievement”.

The Foreign Minister said he is bound at nuclear negotiations not only by the instructions of the Supreme Leader but also by the line of the Guards. He said Mr. Khamenei had recently “forcefully rebuked” him for straying from the official line when he said Iran was willing to work with the United States to choreograph steps toward returning to a deal.

Zarif also criticized Soleimani for allowing Russian warplanes to overfly Iran in their bombing of opposition areas of Syria, in moving and deploying military equipment and personnel in the country on the State-owned Iran Air airline without consulting the Government.

Analysts have long pointed to the Revolutionary Guards sidelining the Rouhani Government, let alone the Foreign Ministry, in Syria. Soleimani led the military’s support of the Assad regime after the Syrian uprising of March 2011, through logistics, intelligence, the formation of a national regime militia, and Iranian special forces and commanders. In summer 2015, the general worked with Moscow for Russia’s massive intervention in September 2015, preventing Bashar al-Assad’s fall and gradually recapturing opposition-held territory.

Soleimani was prominent in Iraq after the 2003 war and overthrow of Saddam Hussein, as the US-led coalition faced insurgency and the country descended into civil war. His authority was reinforced in summer 2014, when the Supreme Leader vetoed President Rouhani’s proposal to work with the US in the face of an Islamic State offensive that quickly seized much of Iraq.

Zarif complained that the Guards’ dominance has continued even after Soleimani’s killing. He noted that when Iran decided to retaliate against the US, two Quds Force commanders told the Iraqi Prime Minister Adel Abdul Mahdi that Tehran would fire missiles in 45 minutes against a base with US personnel.

But the Americans knew about the attack before he did, Zarif explained, noting that it was former US Secretary of State John Kerry — and not the Guards — who revealed more than 200 attacks by Israel on Iranian interests in Syria.

Covering Up The Downing of the Ukraine Jet

Zarif also described the Guards’ cover-up of their downing of Ukraine International Airlines Flight 752 on January 8, 2020, just after the Iranian attack on the US base in Iraq.

The shootdown, by two missiles from an anti-aircraft battery near Tehran, killed 176 passengers and crew. More than 100 of the victims were Iranian citizens.

Zarif describes attending a meeting of the Supreme National Security Council with military commanders, just after the incident. He said the world was demanding an explanation.

The commanders rounded on him and ordered him to tweet that the claim of a shootdown was not true.

“I said, ‘If it was hit by a missile, tell us so we can see how we can resolve it,’” Zarif explained. “God is my witness, the way they reacted to me is as if I had denied the existence of God.”

The Revolutionary Guards only told President Rouhani about the missiles downing the plane on January 10. The next day, they admitted the cause, followed by a statement from Rouhani.