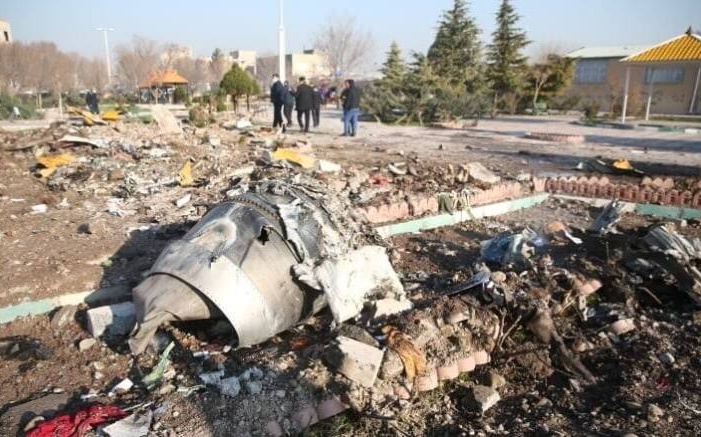 The wreckage of Ukraine International Airlines Flight 752, downed by the Iranian military near Tehran, January 8, 2020

An Iranian prosecutor says 10 officials have been indicted over January 2020 shootdown of Ukraine International Airlines flight PS752, killing all 176 passengers and crew.

“The indictment of the case of the Ukrainian plane was also issued and a serious and accurate investigation was carried out and indictments were issued for 10 people who were at fault,” Tehran military prosecutor Gholamabbas Torki said.

He did not name the defendants.

The CAO said in its 285-page final report on Wednesday, “The plane was identified as a hostile target due to a mistake by the air defense operator…near Tehran and two missiles were fired at it.”

The report cited a “chain of errors”, including a communication lapse between the air defense system and the command center. However, it avoided any mention of Revolutionary Guards responsibility for the killings.

Spokesman Saeed Khatibzadeh declared the shootdown of the Ukrainian jet was outside the authority of Callamard: “There are definite and detailed legal and technical frameworks for addressing this subject in international law, and the area of activity of the rapporteur has nothing to do with those frameworks and regulations.”

He warned that the “half-baked and groundless” letter might have a negative effect on the legal procedure. Without dealing with the substance of Callamard’s report, he asserted that she had no “credible evidence”.

An Iranian anti-aircraft battery downed the Ukraine jet with two missiles on January 8, 2020. All 176 passengers and crew — more than 100 of them Iranian citizens — were killed.

The shootdown came five days after a US drone strike assassinated Maj. Gen. Qassem Soleimani, the commander of the Revolutionary Guards’ Quds Force.

The Iranian military initially blamed “catastrophic engine failure” and did not inform President Hassan Rouhani of the circumstances. Three days after the crash, the military and Rouhani finally acknowledged the downing, sparking mass protests across Iran.

It is still unclear when the Supreme Leader knew of the shootdown and if he authorized the coverup.

In its final report in July, Iran’s civil aviation authority maintained that a broken radar system disrupted communication between the anti-aircraft battery and Revolutionary Guard commanders.

“Contrived to Mislead and Bewilder”

Callamard is the UN Special Rapporteur on extrajudicial, summary, or arbitrary executions. She wrote in a 45-page letter after a six-month inquiry:

The inconsistencies in the official explanations seem designed to create a maximum of confusion and a minimum of clarity. They seem contrived to mislead and bewilder….

The Iranian government claims it has nothing to hide, yet it has failed to carry out a full and transparent investigation in line with its international obligations. As a result, many questions are left unresolved.

She summarized that Tehran’s belated assessments “suggest at minimum a reckless disregard for standard procedures and for the principles of precaution, which should have been implemented to the fullest given the circumstances and the location of the missile unit in the proximity of a civilian airfield”.

Callamard delivered the letter to Tehran in December, but has received no response. The document was published on Tuesday after a 60-day period of confidentiality.

About the time that it received the Rapporteur’s findings, the Rouhani Government finally allocated $150,000 for the families of each of the 176 victims.

However, Ukrainian Foreign Minister Dmytro Kuleba told Iranian counterpart Mohammad Javad Zarif that it is “possible to start calculating the amount of compensation” only “after establishing all the facts about the tragedy”.

Canada, where many of the victims lived, also rejected the offer as it had not seen “full disclosure…on all relevant evidence”.

In an audio recording, obtained by the Canadian Government, an Iranian official — identified by sources as Foreign Minister Zarif — said the shootdown might have been intentional, but the highest levels of the Iranian regime and Revolutionary Guards will never acknowledge the cause:

There are reasons that they will never be revealed. They won’t tell us, nor anyone else, because if they do it will open some doors into the defence systems of the country that will not be in the interest of the nation to publicly say.

See also Ukraine Jet Shootdown: Did Iran FM Zarif Suggest It May Have Been Intentional?

Callamard concluded in her letter to Tehran: